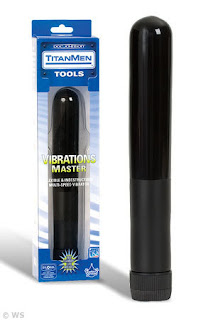 Over at Lovehoney this March it’s Doc Johnson month, and the kind people there decided to send me the Vibrations Master #1 from the TitanMen range to test.

The Vibrations Master from TitanMen is an object which looks more like a weapon than a sex toy. If you were to take a vibrator and encase it inside a policeman’s truncheon, then this would be a pretty good approximation of the result.
Lengthwise the toy is big, coming in at 10 inches in total, and it has the heft to match its size. The surface of the toy has two different textures; the top 5.5 inches are completely smooth and shiny, which allows a seamless gliding action when inserted, and the next 3.5 inches are matte and slightly textured, to provide grip when holding this area of the toy like a handle. The final inch is taken up by the control dial, which is used to adjust the strength of the vibrations, and can be unscrewed completely to access the battery compartment. Despite the change in textures, all 9 inches could feasibly be inserted by anyone up to the challenge, but as the toy lacks a flared base one would be wise to leave sufficient length to hold on to.
The toy isn’t terribly thick, at only 1.6″ in diameter, or 5.5″ in circumference, and so it isn’t a great challenge in that regard. What does make the toy problematic for beginners, though, is that it has a very blunt end. As someone with experience using anal toys, I found that it was possible to insert the toy without prior preparation, simply by using sufficient lube and going slowly, but a novice quite clearly would need to use a tapered butt plug beforehand.
The Vibrations Master is made from Doc Johnson’s Silagel material, which as always comes with a bit of a smell. It’s not the worst smell in the world, and as the surface area of the toy isn’t that large, it isn’t that strong, so you’re unlikely to notice it when not holding it near to your face. The toy has all been moulded in one piece, so there are no seams along the surface. Despite the box claiming that the material is flexible, in fact it’s really rather rigid. Both ends feel hard and solid; the tip because it contains the motor to cause the vibrations, and the base because it houses the battery compartment. The only portion of the toy which could be squeezed or flexed was the middle, but this took considerable force. When the toy is inside you it does not bend or alter it’s shape at all in response to the body.
I wouldn’t say that the toy was uncomfortable to use, but the combination of the blunt tip and rigid body make it less comfortable to use than other toys I have of a similar size. These factors also made it more difficult to insert the toy deeply, I only got so far as the bottom of the shiny portion before it physically would go no further.
The vibration function on the toy is quite pleasant. It doesn’t advertise itself as a prostate massager, and that it certainly is not, so don’t go expecting something that will drive you to wild anal orgasms. The vibrations are strong enough to be felt inside the body though, and have quite a soothing feeling to them. The only mode of vibration is constant, but the intensity can be adjusted with the control dial. The motor isn’t too loud, and should go unnoticed through a stud wall or closed door. It’s powered by two AA batteries, which unfortunately do not come included.
As a toy for solo use, I have to say I found the Vibrations Master to be quite boring on the whole. The smooth uniform shape of it wasn’t very interesting to insert, the straight design meant that it didn’t hit the prostate in the way that something curved might, the rigid material didn’t make it very fun to thrust with, and the vibrations just failed excite me at all. If I were to compare it to The Tool, also by Doc Johnson, I find that to be a much more enjoyable toy to use. I can see the value of this toy in couples’ play however. The unique and somewhat kinky appearance of the toy, immediately lends itself to use as a prop in a role play scenario.
Overall it’s a decent well made toy, but if you’re thinking of buying it to use by yourself, then there are better things on the market. If you want to play cops and robbers with your other half, then this toy might just fit the bill.
The TitanMen Vibrations Master #1 is no longer being stocked by Lovehoney. 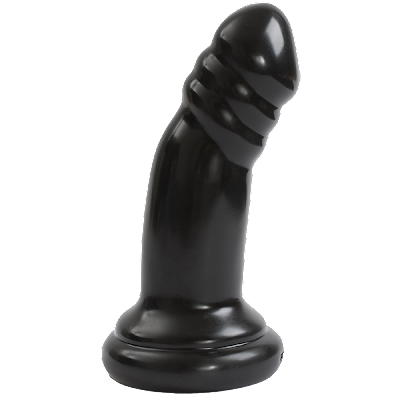 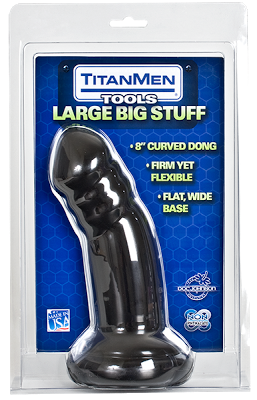 Like all Silagel products the Big Stuff does have something of a plasticy odour about it; it’s not overly unpleasant, and is tolerable, but it’s still noticeable, and strong enough to leave its aroma in an entire drawer or cupboard if you store it outside its original packaging.  Standard water-based lubricants don’t adhere to the surface quite as well as with other materials, so I found myself using somewhat more than I would on other toys, just to get an even coverage over a comparable area. For this reason I’d recommend pairing this toy with a thicker cream style lubricant.
On the subject of the packaging there isn’t a great deal to say, it’s just a simple clear plastic shell which does its job of holding the item in place, but there’s really no hiding what’s inside. I found it quite convenient to store the toy in when not in use.
Overall I’d have to say I’m pretty pleased with this dildo. Like all Doc Johnson products it’s well made and built to last. The one niggle I found with it isn’t a deal breaker, and something I’m certain can be worked around with perseverance.
You can buy the Big Stuff from SexToys.co.uk, and it also comes available in two smaller sizes. 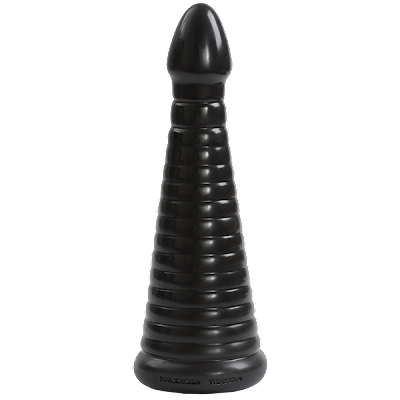 Weighing in at just over 1kg of solid black rubber, the Intimidator is a hefty toy which certainly lives up to its name.

At an imposing 11” tall – 10” of which are insertable – this toy is aimed at those who truly enjoy the bigger things in life, yet this aside it’s also surprisingly versatile. The topmost bulb of the toy has a diameter of just under 1.9”, and while not best suited for anal beginners, it should be manageable by anyone with moderate experience. Beyond this point the toy narrows by 0.33” before gradually widening again until it reaches the maximum insertable thickness of 3.6” near the base. It’s not until you get down to 5” from the tip that the diameter returns to  1.9”, meaning that anyone who can insert the end can easily enjoy at least half of the toy right away, before they need to begin to worry about its size.
Due to the wide 4” base and the weight, the Intimidator has a low centre of gravity, making it perfect to be used placed on a floor or chair, and squatting over it, without needing to hold it in place with a hand, or obtaining a suction cup. I found this to be my favourite position to use it in, as the bulbous tip really hits the prostate every time you lower yourself down onto it, causing the sort of sensations that have you wanting to do it again, and again, and again. 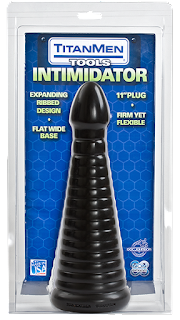 The Intimidator is made from Doc Johnson’s phthalate-free PVC, with their antibacterial Sil-A-Gel additive, which is quite a firm material. It has a fair amount of flex in the top third for you to be able to bend it around, but it doesn’t give very much when you squeeze it, meaning it’s not the most comfortable material upon initial insertion.  The exterior is nice and smooth, so it glides easily in and out during use, and it’s completely free from mould lines. There is some shallow ribbing down the shaft, but this seems mostly cosmetic as you don’t feel it at all inside you; there’s no noticeable sensation of a bump going down. Unfortunately the Silagel does have something of a plasticy odor about it, I wouldn’t describe it as overly unpleasant – and I’ve encountered worse – but it’s not especially pleasant either, it’s more tolerable than anything. The material also seems to be quite hungry for lube; I found myself having to use more of a standard water-based lube than I would on other toys, just to get an even coverage over a comparable area. For this reason I’d recommend pairing this toy with a thicker cream style lubricant.

Due to the very gentle gradient of the toy it does make the perfect tool for training yourself to accept wider things, but in order to get the benefit of that you need to be able to first handle the length, as 10” really is a lot. Due to the quite bulbous nature of the tip, I’m not sure that this toy is the right one to use in an attempt to take that extra length for the first time.
On the subject of the packaging there isn’t a great deal to say, it’s just a simple clear plastic shell which does its job of holding the item in place, but there’s really no hiding what’s inside. I found it quite convenient to store the toy in when not in use.
Overall I’m very pleased with this toy; it’s a lot of fun to use, whether you’re ready to take the whole thing, or if like me you’re quite happy to just make use of the top half for now.

You can buy the Intimidator from SexToys.co.uk