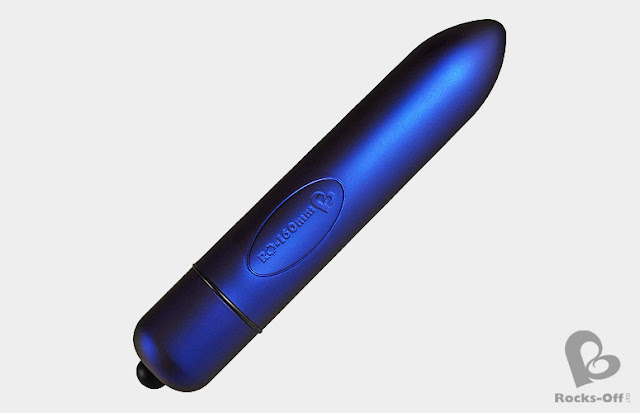 The nice people over at Lovehoney have sent me my first item to review for them, the Rocks Off RO-160mm. It’s a full-sized version of the Ammunition for Love bullets that Rocks Off are best known for, and I was interested to see how it would measure up. It’s also available in pink for those who prefer that.

Read the review after the jump!
I was quite impressed by the overall appearance of the product when it arrived. The RO-160mm comes packaged inside a sturdy black cardboard box, with a clear plastic viewing window at the front. Inside the box the item is clipped securely into a plastic tray adorned with the company logo, which makes it the perfect place to store your toy when not in use, safely away from unwanted dust.

The RO-160mm is completely waterproof, which is great for cleaning it, or if you want to use it in the bath/shower. It’s only waterproof when the battery compartment is screwed on completely, and handily both the cap and main body have markings on them, so you can be safe in the knowledge that once they’re aligned everything is screwed down sufficiently tightly.

The product has 7 modes of vibration; 3 constant modes of increasing speed, and 4 separate patterns of pulses. This is operated by a simple button on the far end which is used to cycle through them, and which feels a little on the flimsy side. When holding active the vibrator in your hand it does feel as though it’s actually quite powerful, but unfortunately this didn’t seem to translate at all when being inside the body anally, or when being used to stimulate the most sensitive areas of the penis. Despite the outward indication of strength, the vibrations appear to lack any real focus or intensity, and the result is mostly disappointment. The best comparison I can make, is that the vibrations are similar to those of a controller for a video game console; it shakes and judders around so you know that it’s there, but the vibrations dissipate very quickly and don’t direct their full force anywhere.
The vibrating function of the RO-160mm is incredibly noisy, and almost gave me a start when I first turned it on. It creates a level of noise comparable with, or greater than, both an electric toothbrush and an electric razor. Even attempting to drown it out with the television had negligible effect, making it anything but subtle to use. I wouldn’t feel comfortable using this knowing that someone was in the next room, as I’m certain the sound would travel through the paper-thin walls and doors of modern houses.
On the whole I would be disinclined to recommend this toy; it has a nice outward appearance, but functionality which doesn’t live up to that of its smaller cousins in the range.
The RO-160mm is no longer being stocked by Lovehoney, but it is available from SexToys.co.uk and Honour