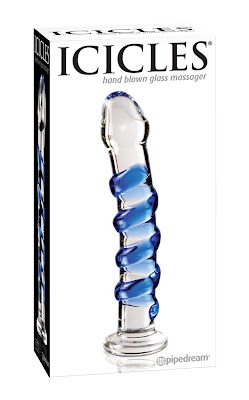 This month the lovely people over at Simply Pleasure got in touch with me and asked if I’d like to review a couple of items for them, and of course I said that I’d be more than happy to.
The first product they sent me is the Icicles No. 05 by Pipedream. I’m a definite fan of glass toys, and since I reviewed the Icicles No. 37 last month I’ve been eager to try some more products from this range You can see what I thought after the jump!
The Icicles No. 05 is a glass dildo from Pipedream. It’s a vaguely phallic toy in design, with a bulbous tip and gently curved shaft, but it also includes some wide ridges down the length for added stimulation.
In total the toy measures 7″ in length, with 6 1/2″ insertable, which I consider to be a good size for a dildo; it’s almost the Goldilocks of lengths, not too big, not too small. The tip of the No. 05 is shaped to resemble the head of a penis, and its rounded end gently tapers out to a maximum circumference of 4 1/2″. Below the head the shaft of the dildo is narrower, measuring only 3 3/4″ around. The shaft itself has a gentle upward curve, and its surface is smooth, with the exception of a single raised band which wraps around it like a helter skelter and increases the circumference to 4 1/4″. This band forms 4 distinct ridges along the surface, which are positioned slightly differently on each side due to the spiral. At the bottom of the shaft is a 1 7/8″ wide circular base, which is flared enough to guarantee that the toy is anal safe. It has a flat bottom which makes it perfect for standing the toy up on a surface, and offers enough stability to prevent it from toppling over. All in all I think it’s a really lovely design, almost attractive enough to make you want to leave out on a shelf as an ornament, but it’s not quite discreet enough for that.
The No. 05 is handcrafted in China from borosilicate glass (Pyrex) and is really well made. You won’t find any bubbles or imperfections within the material, nor unsightly scratches on the surface. It’s actually surprisingly uniform for a handmade toy, and doesn’t feature any of those little quirks or oddities which you occasionally see cropping up in similar products. It’s made largely from a completely transparent glass, but the raised spiral which snakes its way around the shaft is tinted a stunning cobalt blue. Borosilicate glass is a great material for a sex toy because it’s toughened, so there’s no chance of it accidentally shattering, and it can take a fair amount of abuse. The glass can also be subjected to wide changes in temperature without suffering any damage, which makes it great for temperature play. Whether you want to heat in up in hot water, or cool it down in the freezer, the material will respond and stay at that level. The packaging even suggests it can be warmed in the microwave, though I haven’t attempted this.
The Icicles No. 05 comes in very tasteful packaging, and I honestly couldn’t find anything to complain about. It’s packed into a thick piece of foam to protect it from impact, and then put inside a simple cardboard box. The box has a straightforward monochrome colour scheme, and features several attractive photos of the No. 05 on the faces, so you know exactly what you’re getting. If the photos aren’t enough then the front of the box also swings open like a door, allowing you a peek of what’s inside through a small plastic viewing window. Usefully the box does have some information printed on it, giving advice on how to clean the toy and heat or cool it.

The No. 05 is a really nice toy to use, and thanks to its size it should be suitable for most people, bar only complete novices. It is a little on the slim side, but when you combine that with the firmness and rigidity of the glass, and the textured surface, it acts to make the dildo feel that much bigger, so size lovers don’t be discouraged. The tip of the dildo slips easily into the body, with only the slightest amount of lube being necessary due to the frictionless nature of the smooth surface. Even though glass is a hard material there’s absolutely no discomfort to speak of as it passes through the muscle, thanks to the gently-rounded tip. Once you get past the tip you can feel a slight pop as it gives way to the narrower shaft following behind. Almost immediately as the shaft begins to slip inside you can feel the ridges from the raised area which corkscrews around it, and if you’re a fan of texture then this should really appeal to you. The ridges are pronounced enough that you can clearly feel them, almost enough to make out each individual bump, but they are rounded on the surface to prevent the feeling from being too intense. The result is that the sensation is nothing but pleasurable. You really want to go slowly at first when inserting the dildo, just to allow it to find its own path, as clearly the material can’t adjust its shape in response to your body. Due to the length of the shaft and the rigidity of the glass it’s probably not going to be a toy which you can insert all the way down to the base. Once it’s in a certain amount you can feel the tip pressing firmly against the top of the rectum and you know that that’s a good indicator not to push it any further. Despite this it still fells very comfortable inside the body, you just need to be reasonably careful with what you’re doing. The design of the ridges prevents thrusting from happening too rapidly, and thus avoids accidentally ramming the hard glass into your delicate insides, so you just want to avoid trying to sit on the toy as that’s a sure fire way to impale yourself. The base of the toy offers a convenient way to manipulate it, and it fits nicely into the grasp of your hand while using it. I found that the best way to use it was simply to gently thrust by hand and enjoy the sensation of the muscle rippling over the ridges, though if you’re careful you can stand it upright and ride it, and this is also pleasurable. Whether you’re enjoying the slow popping sensation of each ridge, or building up a little bit of speed, it’s a fun toy to thrust away with. The curve in the shaft offers some prostate stimulation, but it isn’t that forthcoming. If you’re not too certain on how to stimulate your prostate then you might struggle a little with the No. 05, but if you’re already a dab hand at it then you need only direct the tip into the right position and thrust away, and it can work quite effectively. Personally it’s not my favourite prostate toy and I like it more for its texture, but it clearly has versatility and that’s always a good feature. Surprisingly twisting the toy actually does very little; you’d assume from the design that rotating it like an Archimedes screw would produce some pleasant effects, but that isn’t so much the case, even if you twist and thrust simultaneously.

As a brief side note, visually it’s rather an interesting toy to look at during use, whilst it’s inside the body, as you can see straight down the transparent core. Obviously as it’s dark inside the body you can’t see too much, but it does produce an effect which you won’t find with many toys.
When you’re done playing with the No. 05 you’ll want to wash it, and thankfully that couldn’t be easier. Glass is a non-porous material so you can toss it in the dishwasher, boil it for a couple of minutes, or wipe it down with a 10% bleach solution, and all will leave it completely sterile. You can also just wash it with plain old anti-bacterial soap and hot water, or use a toy wipe. One area of the dildo which can be a little tricky to clean is the underside of the head. It features a moderately deep and very narrow groove, intended to mimic a feature of the glans, and here lube and dirt can gather, so you need to pay a little extra attention to it during cleaning to make sure nothing has been missed.
Overall I’d say that if you’re a fan of rigid toys, and toys with texture, then I’d happily recommend the Icicles No. 05 as a good glass anal toy. It’s really nice to look it, it’s well constructed, and those bumps on the shaft will give you a fun ride. If firm isn’t your thing, but you still want texture, check out my review of the Tantus Echo.
You can buy the Icicles No. 05 at a great price from the folks at Simply Pleasure.