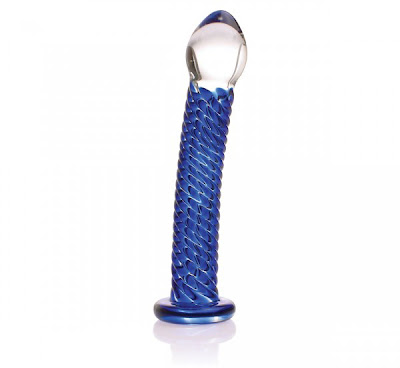 In terms of length it’s fairly standard coming in at 7 1/8″ long, with 6 3/4″ insertable, so it’s longish if you’re comparing it to an average penis size, but in terms of toys it’s fairly ordinary and far from some of the excessive things I have in my drawer. I refer to it as “medium” mostly in reference to its width, as it’s really not that thick of a toy at all; the circumference of the shaft comes in at 3 5/8″ around, making it one of my least girthy toys, but the head of the dildo does expand to a quite reasonable 4 5/8″, so you can see why it was necessary to have a smaller shaft in order to achieve the rather elegant shape they were going for.

The dildo is manufactured from borosilicate glass, which is also known by the brand name “Pyrex.” This is an important feature because it means that it’s a very tough and durable material. The glass isn’t going to crack, shatter, or otherwise break in two during the course of normal use, and you can also subject it to extremes of temperature without it sustaining damage. The material is, of course, not indestructible, so if you accidentally drop it onto a hard surface from a significant height it may well chip, but don’t be surprised if its your tile floor which fares the worst in such an encounter. The other advantages of glass as a material are that it’s non-porous, body-safe and can be sterilised ready for sharing with a partner, and also that it’s great for temperature play, whether you want to heat it up under the hot tap, or cool it down in an ice bucket. Potential downsides to glass, depending on your preferences, are that quite clearly it’s a rigid and inflexible material which might not appeal to everyone.

When it comes to using the Blue Swirled Delight the name gives it away a little, because it really is a delight all round. The gentle taper on the tip makes it nice and easy to insert, and this should be possible without the need for a warm up toy for the vast majority of people. Because the surface of glass is so smooth and polished it really does slide through a tight sphincter like a knife through butter, with no discernable drag whatsoever. You don’t even need a lot of lube either, and because it’s glass you can use any lube you like; a couple of dabs of a thin silicone lube are more than enough, so forget the buckets of thick anal lube. In my opinion most people are going to get on fine with this dildo, you don’t really need a set level of experience in order to tackle it. Because of the size and shape I’d almost be tempted to say that it would be good for a beginner, but what holds me back really is the material; as glass has no give to it you really want some degree of control over the muscle, else one involuntary spasm will have your uninitiated sphincter clamping down firmly on solid glass and any ensuing discomfort could be off-putting. The other factor is the texture and often it’s best to start with something smooth and allow yourself to first become accustomed to that.

Personally I could use a little more girth in the dildo, but I find that the texture works well enough for me to overlook this, and I still get a great deal of enjoyment out of it. What’s interesting is that different toys work in different ways, and this is very much an anus-focussed toy; it’s in this nerve rich area that you’re going be feeling all the different sensations and deriving the pleasure. It’s not a prostate toy at all; even with the bulbous tip and slight curve to the shaft I have to say that it missed my prostate entirely and I felt nothing there. It really is all about the texture, so you want to bear that in mind and be sure that you’re a texture fan.

You have a couple of options on how to use the toy, either thrusting by hand or standing it up somewhere and riding it. Both work equally well in my experience so it’s just a matter of preference. The base isn’t completely flat on the underside, so it does wobble a little when you place it somewhere, but this doesn’t impede its performance at all. One thing you do want to watch out for with the toy is vigorous thrusting; it’s likely that you’re only going to be able to comfortably insert 2/3 of it anally, so it’s important to bear that in mind during use, as accidental over-insertion with something as solid as glass can be painful

Overall I’d have to say that I’m a big fan of the Blue Swirled Delight and would happily recommend it. It’s beautiful to look at, it has a fantastic texture, it’s great for temperature play, and I much prefer the uniform shape to the conical design of the Mister Twister. The only real downside for me is that I’d like a little more thickness in the shaft. It may not happen to be a good prostate toy, but I don’t hold that against it as I don’t expect one toy to do everything, and it does more than enough already.

I’m not sure of anywhere that sells The Don Wands Blue Swirled Delight in the UK, so check out the Icicles No.29 as an alternative.