Despite having had some issues with We-Vibe products in the past, such as my Salsa’s unstable charging dock, followed by its sudden death, and my Tango mysteriously developing a giant crack in one side, I decided to take the plunge and spend my own money on a Ditto rather than waiting and trying to get a review unit. Ultimately this was encouraged by a hefty Black Friday discount over at Lovehoney last year, and while it’s taken me a while to get around to reviewing it, it’s time to finally reveal my thoughts.
The Ditto is a relatively small toy, especially by the standard of something of the things I’ve used in the past. It seems to be aimed more at the curious-beginner end of the market; guys who are looking for that non-threatening luxury toy with which to safely take their first steps into prostate stimulation.

The main bulb of the toy is only 3” in length, with a 3 ¾” circumference around the widest point, and it features a slightly curious shape. From one angle it looks like a traditional plug design, but then rotate it 90 degrees and it’s completely flat on the back, like a butt plug that’s been cut in half. The result is that you get that rounded protruding portion facing towards the prostate, while the flat reverse helps to reduce the overall girth. The bulb has a tiny neck measuring only 1 ¾” around, which connects to a generous base below. The base sits up against the perineum, anchoring the Ditto securely outside the body, and including both the power button and magnetic charging port. Interestingly the base is completely perpendicular to the bulb of the toy, giving it a distinctly “L” shape, rather than being angled to force the bulb against the prostate as seen in many similar toys.

The Ditto has a selection of ten different power settings, including a choice of nine vibration patterns in addition to a constant mode. When you hold the Ditto in your hand and crank it all the way up to max it does feel quite strong, and you can feel the focal point of the vibrations right at the front of the bulb, where it’ll make contact with the prostate. Comparing it to the Tango, however, reveals that it’s significantly underpowered, so unfortunately it’s not quite the Tango for the butt that I’d always dreamed of. The various patterns are named Pulse, Wave, Tease, Ramp, Tempo, Massage, Step, Heartbeat, and Cha Cha Cha, and  are all well thought out and enjoyable to use, but there’s also a clever option included to design your own vibration patterns using the phone app, if you fancy something unique to your own tastes.
Inserting the plug is nice and easy thanks to its small size, and it fits comfortably inside the body. You feel its subtle presence there, but it doesn’t feel in any way filling, and there’s no real sense of any pressure being applied to the prostate. The base of the ditto nestles nicely up against the perineum, and the whole thing feels completely unobtrusive when you’re walking around, and even allows you to sit down on it. 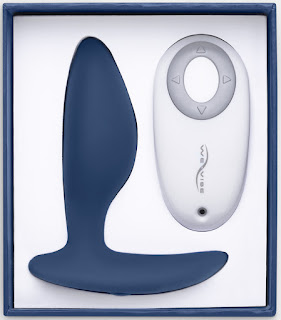 How the Ditto performs is actually a bit of a mixed bag, rather confusingly. Through the 11 or so months I’ve had it I’ve naturally tried it out several times, and I’ve struggled to settle on a final position on how I feel about it. On some occasions the plug feels pretty great, and on others it feels entirely lacklustre; the question is why? It is the same plug after all, the same size, the same shape, the same power, why doesn’t it deliver consistent sensations? The conclusion I’ve reached is that the performance of the Ditto depends largely on what you do in the preceding time. If I haven’t used any toys anally for a while before I try out the Ditto, then it appears to perform really rather well, but if I’ve been regularly using other toys – especially larger toys – then somehow the vibrations of the Ditto get lost almost entirely and the whole experience feels rather poor. The does present a bit of a tricky situation, because if you’re a beginner and the Ditto is your first toy then it’s going to be great, but for anyone who enjoys – or plans to enjoy – more active butt-play in their life, then there’s going to be large swathes of time where the Ditto just can’t effectively be used. I can only imagine that because of the Ditto’s small size, adequate prostate contact becomes paramount to its effectiveness, and if your prostate becomes accustomed to firm pressure, or being relocated slightly in one direction, then it diminishes what the Ditto is able to achieve. This theory seems to be somewhat supported by the fact that the Ditto appears to perform better when you’re already significantly aroused, for example if you’ve been edging for a prolonged period and the prostate is well primed to initiate an ejaculation.

When the Ditto does perform at its peak it’s a very enjoyable toy. The vibrations are strong, deep, and have that rumbly feel which allows them to penetrate into the prostate. The first time I used it I was actually really impressed by everything I was feeling. Despite its small size it can certainly pack a punch, though sadly it doesn’t reach that same intensity as the Tango, and I always crave more power in any toy. The choice of patterns is one thing which stands out about it, because while a constant vibration feels nice you become accustomed to it all too soon, whereas those rhythmic pulses act as a constant stream of fresh sensation. It’s one of those toys which is great both in and out of the bedroom, whether you be walking around, or sat down doing something, it can be very pleasant to have that sensation of your prostate being gently massaged. When sexual activity is involved, however, it’s a definite enhancement, be you wearing it while having some personal time with a good porn film, or enjoying a partner. That added sensation and stimulation of the prostate in the lead up towards an orgasm always makes the climax feel that much better. The Ditto is like having a little supercharged booster in your butt.
The Ditto can be controlled exclusively via the button on its base, but is intended to be operated primarily by either the included wireless remote, or a downloadable phone app. The remote is a small plasticky thing featuring four simple buttons, but it’s enough to get the job done. The up/down arrows control the power level of the Ditto, as well as turning it on or off, while the left/right arrows cycle through the various vibration patterns. The app is much more interesting, and my preferred way to use the Ditto, because it gives a visual representation of each pattern. It seems to be fairly well designed, and it’s easy to swipe your way through the pattern choices, and drag the intensity slider up and down. 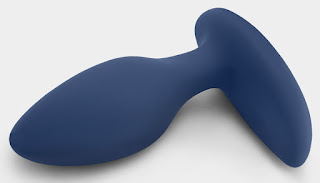 The big question with any wireless toy is what the range is like, and this is unfortunately where the Ditto falls down. Provided you remain completely naked the toy will stay connected to your phone or the remote, but as soon as you put on some underwear and a pair of trousers it starts to have signal problems, even with your phone placed in one of your trouser pockets. For me half the fun of having a wireless phone-operated toy is the possibility of wearing it while out and about, and activating it at will, but when it constantly disconnects that causes problems. One major flaw is the fact that it won’t automatically reconnect, and has to be manually paired with the phone again on every occasion. Imagine a situation where you’re using the Ditto, you suddenly want to turn it off to avoid someone noticing the vibration sounds, only to discover that it’s disconnected, and the only way to operate it again is to reach into your pants and hold down the power button. Rather facilitating a fun and slightly naughty experience, it’s more likely to send you into a panic, and it almost defeats the entire point of the feature.

On the subject of sound the Ditto is actually one of the more quiet toys I’ve used, which probably is a consequence of the power level not being all the way up there. I can definitely hear it slightly when I’m wearing it, but there’s always that question of whether you’re hearing the sound waves passing through the air, or through your own body. I wouldn’t feel self-conscious to wear it out in a crowded public place, but stood in the muted atmosphere of a lift would have me a little worried.
The quality of the Ditto is pretty top notch as far as I can tell. It’s all perfectly sealed up in a seamless coating of velvety silicone, meaning you can sterilise it after use and share it with a partner if desired. It also has a magnetic charger, so it’s waterproof when it comes to clean up, and a 90 minute charge should provide up to 2 hours of use. 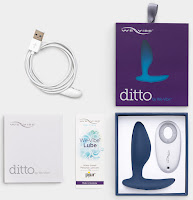 The Ditto is a tricky one for me to wrap up, because ultimately I am disappointed in it, but I also see its merits. The lack of power it has compared to the Tango, the fact that it doesn’t deliver consistent sensations, and all the issues with the wireless connection make it a bit of a damp squib to me. I had such high hopes, such high expectations, and ultimately it fell far short. On the other hand there are things it does well; it’s well made, attractive, the app is functional and easy to navigate, it has a good selection of patterns, it’s whisper quiet. If you’re a beginner who wants a small toy, which doesn’t need to be excessively powerful, but still has good quality vibrations, and who doesn’t plan to wear it out of the house, then the Ditto could actually be a great toy for you. The stumbling block for me is the price-tag. When last I checked it was selling for £110, and for that sort of money I’d want it to do it all. For that sort of money I couldn’t tolerate the flaws. Ultimately that’s going to be a choice for you the consumer though. I don’t want to discourage We-Vibe too much, because for a first attempt at a vibrating plug it’s not a bad effort. I’d love to see them come back with something a little bigger, with the full power of the Tango, and with those connectivity problems properly ironed out. Do that and they’d be onto a winner, I’m certain of it.

The We-Vibe Ditto is available from Lovehoney UK, Lovehoney US, and SheVibe