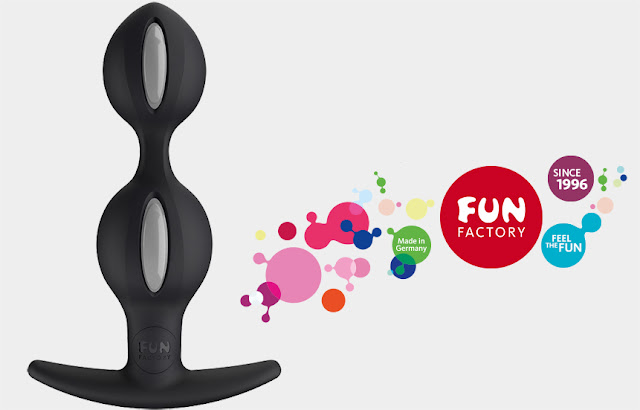 Every now and again, however, there comes along a toy which really is only for the opposite sex, and then I sit there wistfully pondering exactly what it might feel like for them to use it. For the longest time one of those products was kegel balls: those hollow spheres containing a free-moving ball bearing, which women insert in order to tone their pelvic floor muscles. Also referred to in those 50 Shades circles by the cringe-worthy moniker “jiggle balls.” Up until a couple of years ago you’d have to have been slightly foolish to try such a product as a man, because with only a rudimentary retrieval system they’re the sort of small objects that can easily disappear inside a rectum, but then Fun Factory finally came up with the answer, in the form of their B-Balls plugs.

The B-Balls Duo is in essence Fun Factory’s “Smartballs Duo” kegel balls, but repackaged as a butt plug with a flared anal-safe base. In many ways it’s almost a surprise that no one thought to do it sooner – perhaps no one thought there would be a demand – but I’m certainly happy that it now exists, and that I can try it out.
In general terms of being a butt plug the B-Balls Duo isn’t actually all that large, neatly placing it in that size range which caters to the widest number of people. In terms of length you have 4 1/2″ insertable, and the circumference of the various sections is as follows: 1st bulb – 4 1/4″. 2nd bulb – 4 3/4″. Neck – 2 1/4″. It’s clearly not the most girthy plug in the world, so I’d be happy suggesting that almost anyone bar a complete novice would be fine using it, but it’s also not a plug which relies entirely on size to create stimulation, so don’t rule it out yet if you’re someone who likes a stretch.

The B-Balls Duo is constructed with Fun Factory’s usual selection of high quality body-safe materials – namely silicone and ABS plastic – and to their high production standards as well, so you can feel reassured that you’re getting a top notch piece of German engineering. The actual manner in which the design is put together is rather interesting from a technical standpoint. There are two hollow spheres made from a hard grey plastic, each containing a single ball-bearing, and these in turn are held together by a silicone outer shell which is firmly bonded to the exterior surface of the plastic, and which makes up the remainder of the shape of the plug. What’s unusual is that sections of the grey plastic have purposely been left visible, and aren’t covered by the silicone, giving a rather attractive design feature, but it’s hard to know if this was decided upon purely for aesthetics, or as necessity during the moulding process. The downside to this design element is the presence of a slight groove that runs between the plastic and the silicone, creating a place for dirt to readily gather and making it somewhat harder to clean, which isn’t ideal for a toy that’s going to be used anally. It’s just as well that the materials are all non-porous and can be sterilised by boiling, or soaking in a 10% bleach solution, allowing you to freshen the whole thing up after use.

The silicone that’s been used in the manufacturing is surprisingly firm for a Fun Factory toy, and has little-to-no give in the surface when you squeeze it. It also accounts for only a thin layer covering the plastic spheres, so it doesn’t really offer any cushioning as you might often expect. I found this especially apparent when comparing it to the vibrators in my giveaway a few years ago, as they have a slightly thicker and much softer silicone layer, giving a completely different feel. My speculation is that the firmer silicone was a requirement to make it bond so securely to the plastic, as anything softer – and therefore more elastic – could have compromised this. Despite the firmness of the silicone the thin neck between the two bulbs remains nice and flexible and can easily be bent about, and the faint mould line which runs around the toy can barely be felt on the matte surface. 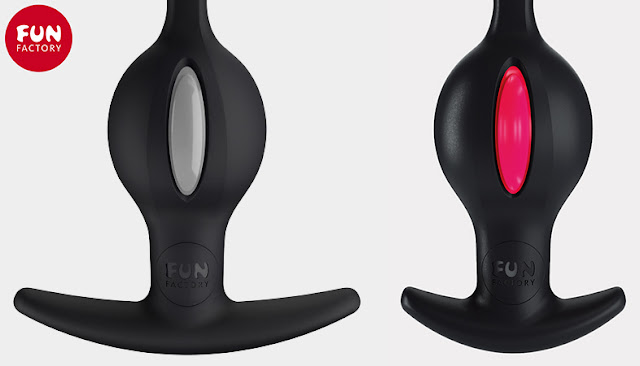 The base of the B-Balls Duo is identical in design to that of some of Fun Factory’s other plugs, such as the Bootie and Boosty, and that happens to be my favourite shape of base in terms of comfort and discretion. On the Original B-Balls the base was considerably narrower, as can be seen in the photo above, so this is a big improvement.

When it comes to wearing and using the plug the B-Balls Duo is actually a lot of fun, and it all starts with a hassle-free insertion thanks to a size and shape which it lets slip into the body with minimal effort. Once the plug’s inside it settles into a comfortable position, with the joint between the two bulbs bending to correspond with the curvature of the rectum, while the sphincter comes to rest around the slender neck. For me the total length of the plug is just right, and it sits in place without poking at the top of the rectum, which sometimes can be an issue with anything longer. The small base nestles itself away between the buttocks quite discreetly, allowing it to remain unseen beneath clothing, and its low profile allows you to happily sit on it on any surface hard or soft.

At first it feels, for the most part, just like wearing any other plug. There’s this awareness of something being inside you, and it delivers that familiar pleasant sensation, but without feeling overly filling or stretching. The exciting things start to happen when you move though, and the ball bearings inside begin to roll around in response. It’s one of those experiences that’s almost fitting to be described as unique, but the closest thing I could compare it to is a feeling of a juddering vibration. Every slightest movement of the balls is instantly brought to your attention as they skip along the inner surface of the spheres, jump from side to side, and swing through a series of loops. You have this constant sense of the weight shifting about inside you as they move, and because there are two balls moving in different ways at the same time the weight doesn’t shift in balance, with forces throwing around in different directions simultaneously like a mini earthquake within your nether regions. This is what generates that feeling of vibration, and in fact if you examine how any vibrator works they all involve a motor spinning an unbalanced weight around – exactly the same principle. What’s notably good about it all is that it’s a deep sort of vibration you feel when it occurs, like an intermittent rumble.

What makes the sensation of the B-Balls Duo so novel is the responsiveness of it; it reacts entirely to you and your movements. It’s very different to a vibrating plug that just purrs away constantly allowing you to become accustomed to it. The sensation can take you by surprise, delivering a little jolt when you weren’t expecting it, and it also acts as a constant reminder that you do in fact have a plug inserted. Mentally this can be quite fun if you decide to go out and about with this little secret, and find yourself constantly teased by these sensations while no one else is any the wiser. I can almost imagine someone sitting on a bus and giving out a little giggle each time it hits a speed bump and the plug tickles them inside with a small flutter. The other thing that’s tempting to do with it is to experiment with seeing just how much feeling you can actually get out of it, and how varied it can feel all depending on your activities. Go jogging, do jumping jacks, try skipping rope or hula-hooping; any sort of exercise be it at home or in the gym. Wear it when you go dancing in club; try twerking with the person you’ve been flirting with all night and see if it improves your rhythm. It can all be quite amusing to go through and it feels good at the same time, and definitely different. It’s the perfect way to spice up even the most mundane activity, such as wearing it while you vacuum the carpets, or walk the dog.

One thing I did find was that depending on how vigorous your movement is, you can actually hear a bit of a rattle coming from the plug. I did go to the effort of recording it on my phone if anyone’s interested. I wouldn’t worry about this though, as for anyone else to hear it then you’d need to be in a silent room with them standing quite close, while you made jerking movements with your hips, and I can’t imagine a lot of scenarios like that, but it may take you by surprise at first if you weren’t expecting it.

Considering the plug with regard to more long-term wear, the improvements that Fun Factory has made to the base have made a massive difference. The base now nestles comfortably between the buttocks, and the feeling of it even being there at all gradually fades away into the background. Whereas previously it pinched and got sore over time, now there’s no problem with wearing the plug for the duration of an entire day.

When it comes down directly to matters of sex and masturbation then I’d be inclined to rule this plug out specifically for those purposes. There are some plugs which you wear simply for the enjoyment of feeling a plug inside you, and for me the B-Balls Duo falls very firmly into that category – this is where it excels. I don’t really see the ability of the plug to enhance an orgasm in the same way as one which is designed to press against the prostate. The B-Balls Duo works best as a sort of foreplay plug, teasing you and keeping you semi-aroused as you move around throughout the day, but once you’re lying down on your back, moving little more of your body than your right arm, then you’re not going to get the benefit of the plug’s sensations, so I don’t think it’s a fit for that situation. A lot of the time with sex toys it’s about tailoring the right equipment with the right circumstance, so it’s worth bearing that in mind with this toy, and rarely do you find a single product that absolutely does it all.

So now it’s time for a verdict on the new and improved B-Balls Duo. I have to say I really love this product, and I can see myself using it far more than I ever did the previous iteration. It still has that completely unique design feature that I strongly urge everyone to go out and experience for themselves, but it’s fixed the one big flaw that eventually proved a limiting factor in how often I used the B-Balls before. I’m still incredibly impressed with how Fun Factory responded by correcting the base, and now I can fully recommend this plug with no caveats. It really is a lot of fun.

Thanks to Fun Factory for sending me the new version of this plug. It’s available from the lovely people at Lovehoney UK, Lovehoney U.S, Nice ‘n’ Naughty, or SheVibe.