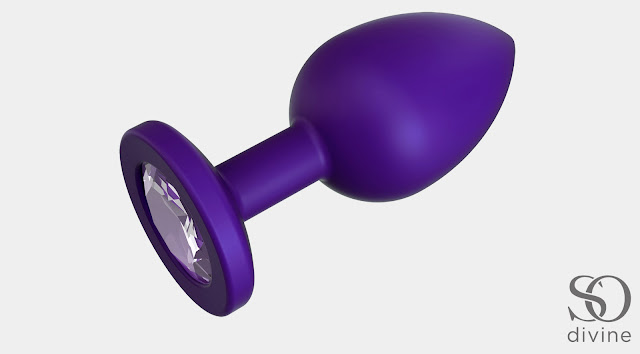 A couple of weeks ago I received an e-mail on behalf of So Divine, a new sex toy brand that’s recently launched in the UK, and they asked if they could send over some products for me to review.

The first one I’m going to be looking at today is this bejewelled butt plug, so head below to see what I thought!
I’m someone who has a lot of butt plugs, butt plugs in every size, shape, and material you could imagine. Butt plugs that vibrate, butt plugs that conduct electricity, butt plugs that jiggle as you walk. You get the picture. The one thing I don’t have, however, is a butt plug adorned by a diamond. Well, that is until now.
So Divine has just released their take on the crystal butt plug, by launching a trio of new “Booty Plugs” made from 100% body-safe silicone. Each plug features the same fundamental design, but they come in three different sizes, catering to people of different experience levels. There’s the ‘Sweet Sensation‘ – the smallest, the medium-sized ‘Bootylicious‘, and the ‘Wild Thing‘ – the largest of the lot. 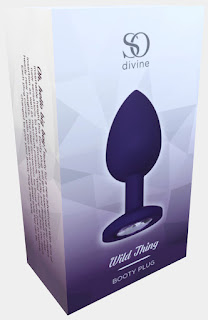 As you might have guessed I am of course looking at the largest option, but despite being the biggest in the range, the Wild Thing is actually quite a modestly-sized plug. It measures in with an insertable length of 3 1/2″, and a circumference of 5 1/8″ around the widest point, so it’s quite similar in proportion to the Butnik from last week, or the Ryder.
The basic design of the Wild Thing is, well, butt plug shaped. There’s not too much you can say about that, though the bulb itself does have a little more of a teardrop quality about it than your standard conical plug. The impact of this, aside from visually, is that it reaches its widest point more rapidly than otherwise, so that’s always something to bear in mind. Beyond the bulb the plug has a slender yet generous neck, and of course is finished off by a nice wide base which houses the signature jewel, waiting to be seen by all it as it sits nestled between the buttocks
One of the things which makes the So Divine Booty Plugs unique is that the jewel in the base is removable and interchangeable. The plugs each come with three differently coloured acrylic gems, one in clear, one in amethyst, and one citrine, which can be swapped out according to preference. The gems each have a silvery backing attached to make them appear more reflective (and because otherwise the refractive index of plastic would let you see straight through to the plug beneath), and they do look quite attractive in place, though not especially sparkly. My favourite has to be to amethyst-coloured gem, as the soft lavender tone complements the deep purple hue of the plug nicely.

Something that’s slightly unusual about the Wild Thing is just how firm it is, and I was immediately struck by this. It’s made from a very dense, solid, silicone, with almost no give in the surface, the type that typically you’d see used on the coating on a toy, rather than comprising it entirely. The closest comparison I can think of is with the Lelo Bob, and actually for this particular application it’s perfectly suitable. The silicone itself has a lovely velvety-soft finish to it, and is free from any mould lines, so I’m very impressed by the overall quality of construction.
In terms of using the plug I really have no complaints about the Wild Thing. It slips into the body easily thanks to its smooth finish and tapered shape, and once inside it feels really comfortable. There’s a slight sensation of fullness from the bulb, while the muscles relax around the slender neck, and the base feels really unobtrusive between the cheeks. It’s comfortable enough that you can wear it around for an extended period of time, and I even managed to fall asleep with it in, so if you fancy leaving the jewel on display there for someone, then there’s nothing to prevent that. When you are done with it I’m happy to say that it comes out again just as easily as it went it, which is always important for anything you might be wearing for a long time. 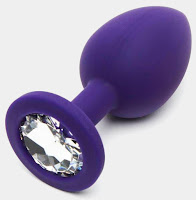 I have to say that the Wild Thing is definitely a fun little novelty. It’s probably not something I would have gone out and bought myself, but I quite like the idea of the interchangeable gems, and being able to bejewel my own butt. It’s also a really comfortable and well made plug, which are the most important things, so I’d be happy to recommend it.
Thanks to So Divine for sending over the Wild Thing Booty Plug. They’re currently available from Lovehoney.
Tweet
Pin