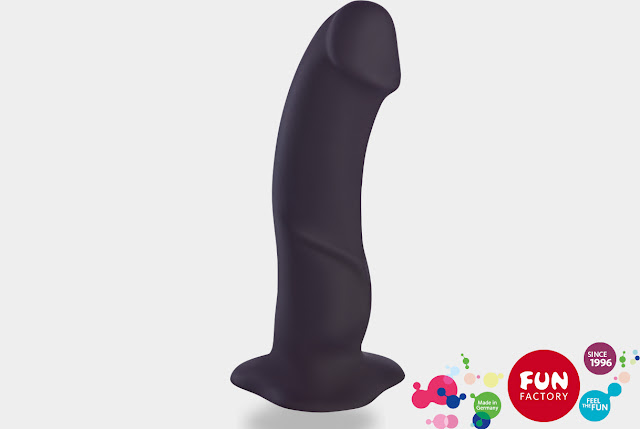 Looking at the Boss you’d naturally assume that the prominent ridge below the head is going to be the sweet spot, dragging its way across the prostate for maximum stimulation, but taking a cue from my experience with the Tantus Adam, I flipped it around and started off using it in the opposite direction. I wasn’t sure quite what to expect when I first inserted the Boss, but I wasn’t at all prepared for the impact that the shape of the shaft would have. It doesn’t look as though it particularly deviates that much from being straight, with only a faint hint of an S-shape, but as you lower yourself down onto it you can distinctly feel each turn back and forth, like your body is a carriage riding along rails. It’s a journey which follows a similar story internally, and as the shaft goes deeper you can feel it wave and undulate, bumping up against the prostate in the process. It’s entirely unique and unexpected, and once you begin thrusting with it and building up a steady rhythm, that’s where it really comes into its own. That wave-like shape, bumping up and down against the prostate with every thrust in and out, creates a strong massaging action which feels wonderful and very stimulating. At the same time the angle and shape of the head help it to find its way deeper into the body, allowing you to comfortably slide down the whole length of the shaft and make the most of every inch.
One of the keys to why the Boss works is the firmness of the dildo. Usually with silicone toys my mantra is “the softer the better” but in this instance the fact that it’s a little stiffer helps it retain its shape enough during use that you can really feel it. It’s still flexible enough to provide comfort and bend around inside you when need be, but they’ve managed to strike a balance that preserves the impact of the curves. It’s one of those dildos that I could ride for an extended period of time, because it creates enough sensation to keep me interested in what’s going on, and it’s also gentle enough on the insides to prevent soreness.
In my experience the Boss does only work in this one particular orientation. Eventually I did flip it around to see how that ridge would fare against my prostate, and there was surprisingly less sensation from it than I had imagined. Something about the way the dildo is curved means that the head just glances off the prostate without the ridge having any real chance to press into it. I can’t say that I’m disappointed by this however, because I got more than enough pleasure from using it one way around, and that’s not something you can say about every dildo. Had it worked both ways then that would just have been an added bonus. One thing to bear in mind is that these products are unisex, so the way which didn’t work for me might be more suited to the opposite gender.
If I had to pick one slight niggle about the Boss, then it would be finish on it. The dildo has a matte texture to it, and while it does feel soft and velvety, it’s still not my favourite. It produces more drag than a shiny dildo, and requires additional lube to compensate. It’s something I can definitely feel the difference between. It’s by no means anything close to a deal breaker, but if I had my way it would be shiny every time, so bear that in mind if you’re sensitive to texture.
The Boss has definitely been a lovely surprise for me and far exceeded my expectations. What looked as though it was going to be just a pleasant regular dildo proved to be real winner on the prostate, and earned the right to its name. The sensations it delivers have a real unique flavour to them and are quite exquisite, and so I would have no hesitation in recommending the Boss. Fun Factory has done a superb job here.
Many thanks to Lovehoney for generously sending me the Boss to Review. It’s available from their UK website, and don’t forget to check out their new category, Sex Toys for Gay Men!

Until October 31st you can get £10 off any purchase over £45 at Lovehoney, simply by using this link.