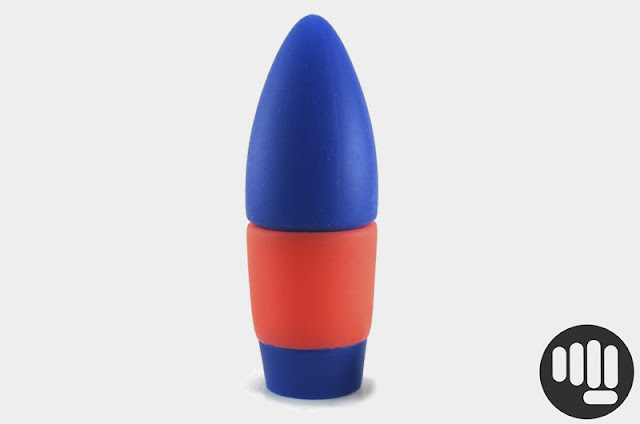 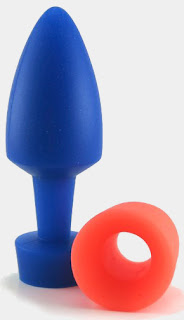 The plug measures 4 1/2″ in total length, with 3 3/4″ insertable, and has a circumference of 5″ around the widest point, making it slightly smaller than the Tantus Ryder. If I’d seen images of it before having one in person then I probably would have assumed it was a little larger than it actually is, but it’s a nice compact plug suitable for anyone in the beginner to intermediate range of butt play experience. The design features a lovely long tapered body, which gradually expands from its pointed tip up to the widest point, and this makes insertion a breeze. The surface of the plug is smooth and shiny, so it glides into the body with little-to-no friction, and though there is a slight seam running down the side, it can’t be felt at all. When it comes to actually wearing the plug it’s really comfortable, thanks in part to the generous neck and the compact nature of the base. I actually really love the base because of how well it nestles between the buttocks and doesn’t disturb you, and also because the shape reminds me a little of a cork or bottle stopper, so there’s a comedy element there. The plug offers a pleasant sensation of moderate fullness, in scale with its size, so it’s enjoyable to walk around and experience that. It’s also very easy to remove the plug once you’re done, despite it seeming a little blunt on the reverse. A gentle tug on the base when you’re fully relaxed and it comes out with no discomfort. It’s the perfect sort of plug that you might want to wear during sex, as well as just for solo play, because it’s completely unobtrusive, as well as easy to insert, so you get all the added sensation without worrying about breaking the moment.
The ring has an overall diameter of 1 3/8″, and an internal diameter of just over 1/2″, which does make it a little on the small side compared to other rings. The supersoft silicone feels lovely and squishy, and has a pretty good amount of stretch to it when you’re playing about with it in your hands, but unfortunately for me I couldn’t quite expand it enough to the point that I could put it on. The practicality of the ring will definitely depend on your individual girth, as it’s not quite a ‘one size fits all’ device. That’s not to say that there aren’t other uses for the ring though, as you can always get creative and slip it over a dildo.
The whole Butnik is really well made and free from any sort of defects or imperfections, so I’m very impressed with the quality of Hole Punch Toys’ work. I have to say, I am really fond of this little plug. Something about the whole concept of it, along with how good it is to actually use. I have a feeling that it might become one of my go-to plugs when I’m in the mood for something modestly sized.
I have to thank Colin at Hole Punch for sending me the Butnik; I’m having a lot of fun playing around with this little gem, and I’d happily recommend it to anyone out there looking for a good little plug.
The Butnik is available from SheVibe, and be sure to check out the Hole Punch website for this and loads of other cool toys! Now I’ll leave you with this funny video:
Tweet
Pin