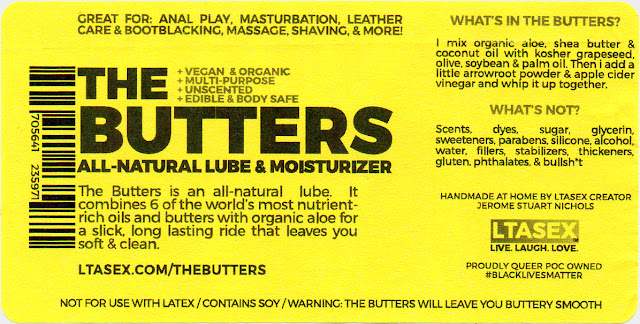 Happy Autumn, folks! This week as the leaves start to turn umber, and the shops begin to fill their shelves with everything pumpkin-related, I’m going to be looking at a small boy from South Park, Colorado an all new personal lubricant.
As you may know I tend to avoid reviewing lubes for the most part, as more often than not it proves to be a chore, but when Jerome from LTA Sex contacted me about his new product I was intrigued enough to agree to try it out.
Catch the review below!
The Butters is an all new oil-based lubricant, produced from 100% natural botanical ingredients. It’s the brainchild of fellow blogger Jerome Nichols, the man behind LTA Sex, and he hand makes every batch of the Butters, giving a uniquely artisanal / cottage-industry touch to a product line typically dominated by large manufacturers.
The Butters is made with just nine separate ingredients, all of which can be seen listed on its label above, with absolutely no hidden additives or mysterious substances included.
One of the primary ingredients of the Butters is coconut oil, and I don’t mind telling you that I’m ever so slightly obsessed with coconut at the moment. Whether it’s making coconut cake, coconut rice, putting coconut milk on my cereal, using coconut and shea butter shower gel and handwash, I’m doing it, but I never would have thought to use coconut oil as a lube.
Interestingly, despite its ingredients, the butters has no discernible smell, coconut or otherwise. I was surprised by this revelation, but it does reinforce the fact that everything inside it is natural, with no added scent compounds. The only slight note of fragrance I picked up was something vaguely bitter, which I’m inclined to believe is from the aloe.
The texture of the lubricant is rich and creamy, feeling like it’s been whipped or gently churned, and you start to get the idea of where it got its name. Unlike most lubes it’s solid at room temperature, and comes packaged in a small tub like a jar of thick overnight moisturising cream. The advantage of this is that it sticks to toys incredibly well, which is especially useful in situations where you need a bit of extra lubrication, and reassurance that it’s going to stay there.
As happens I’ve been trying to get back into using some of my larger toys as of late, which proved the perfect opportunity to test out the Butters. One of the big problems with using a regular water-based lube with a big shiny silicone butt plug, is that as soon as it reaches the point where the body needs to start stretching to accommodate it, the result is like dragging a squeegee down a rain-speckled windowpane. The lube gets scraped off and you’re left with the friction of a dry plug against your body. What I found with the Butters is that once you smear its thick creamy oil all over the plug, it actually sticks to the surface giving a nice even coating, and then when you go to use it a thin lubricating film always remains behind even when the body scrapes away the excess. Because of this it made the plug I was using far more comfortable to insert, and I was really impressed. To try to test this even further I brought out my largest plug, the Tantus A-Bomb, a toy which is such a struggle to insert that I’ve only ever used it a handful of times, and sure enough the Butters noticeably made a difference. By eliminating the discomfort of friction, it makes it far easier to concentrate on working through the sensations of being stretched, and the result is a far more pleasant experience.
Another nice advantage of using the Butters for anal play is that it doesn’t dry out like a water-based lube would, so if you’re considering wearing a plug for an extended time then it remains mobile and won’t tug on the skin. The only potential downside is that it can feel a little greasy between the buttocks, which some may not like.
The Butters is also designed to be used as a masturbation lube if desired. Like most guys with a foreskin lube isn’t something I generally use for that particular activity, but it can be a fun change of pace if I’m varying my technique. What’s interesting about the Butters is that as you apply it to the penis and begin to massage it in, it almost appears to melt from the body heat, and leaves everything with a slick glossy appearance. This change of state really aids with its effectiveness as a lube, and as you start to glide your hand up and down the shaft and over the head it moves completely freely. It’s easily as effective as any silicone lube I’ve tried with this technique, and gives great-feeling and long lasting results. Because it’s also advertised as being a moisturising product you don’t need to worry too much about clean-up, as eventually the skin will absorb it if left alone. If you’re overly generous with it then soap will be required to rid yourself fully of lingering greasiness, but a little does go a long way.
I have to say I’m actually really impressed with the Butters. There are a lot of advantages to having a thicker cream-style lube to hand, and the Butters is especially effective during use. It’s a great performing lube, and its natural ingredients leave the skin feeling silky and moisturised after, so I’d recommend everyone gives it a try.
The Butters is available here
Tweet
Pin