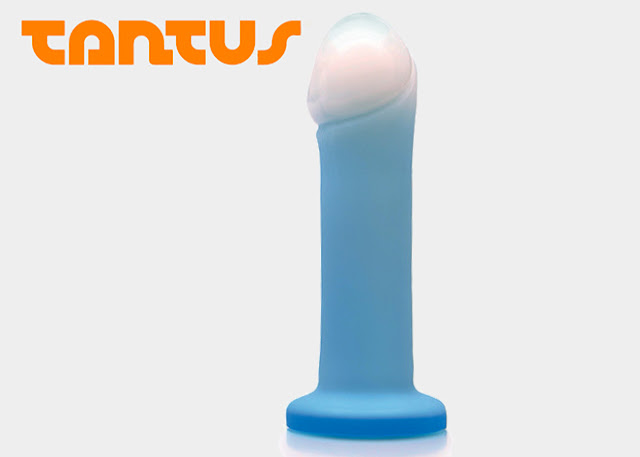 In the lore of Tantus first there came the Raptor, a beautiful chunky dildo with a bulbous head and amusing set of balls. Then there was the Duke, a reinvention of the Raptor, stripped of its balls but still retaining every other feature which made it great. Now we have the Duchess – Tantus’s newest creation – the Duke in every way except it’s been given a fresh lease of life in glorious dual-density silicone. Being both a huge fan of the Duke and all things dual-density it was clear that this was one I needed to try.
You can get the lowdown after the jump!
The Duchess is going to be a bit of a funny dildo for me to review, just on account of how very very similar is it to the Duke. A lot of my time was spent going back and forth between the two products, trying to measure every subtle difference in feeling and behaviour, because naturally when it comes to a review like this what everyone wants to know is how they compare. Much of what I say about the Duchess is going to be simply parroting what I said about the Duke, as it’s unavoidable when they’re so alike, but I’m going to aim to steer the focus firmly towards the areas where the two diverge.

The design of the Duchess perfectly mimics everything we know about the Duke, from its shape, its size, to even the bullet hole tucked away in the base. It’s not bigger, it’s not smaller, it’s not elongated, it has no added curvature; it’s formed from exactly the same mould and stays true to its predecessor in every way.

The production quality of the Duchess is impeccable; something which I’ve learnt to expect from Tantus. There are no mould lines anywhere, no any defects in the surface, and the two different types of silicone are bonded perfectly together. In this instance I couldn’t find a single fault even if I wanted to.

When it comes to using the Duchess it’s one of those toys where you’ll probably want to consider using a warm-up toy first, just because the head is very large and rounded, and has quite a rapid taper. This was almost a pre-requisite with the Duke for just those reasons, but with the Duchess it’s much easier to get away with skipping one, provided of course that you have sufficient experience to know what you’re doing. The reason for this is simply the change in silicone firmness. The head of the Duchess is so soft and squishy that you can push it firmly up against the sphincter and every bit of pressure is cushioned away, ensuring maximum comfort during insertion. It probably goes without saying that at this size it still isn’t a beginner’s toy, but it’s much more friendly to the less advanced user.

One thing I especially loved about the Duke was how good it is for prostate stimulation, and the Duchess lives up to this as well. That big head is nothing short of incredible; the size and shape of it all comes together so that with every thrust it rubs back and forth across the prostate to the maximum effect, delivering waves of pleasure. After extensive testing I’ve concluded that the Duchess feels slightly less intense on the prostate than the Duke does, but it’s an almost imperceptible difference. Unless you’re repeatedly going back and forth between the two toys like I was, it’s not something you’d ever be aware of. The only reason that can explain this is that the coronal ridge on the firmer Duke maintains its angular shape better as it drags along the prostate, and transfers more sensation because of it. Again though, it’s a truly minor difference.
Like many Tantus toys the Duchess does come with a vibrating bullet which can be inserted into a hole in the base. If you know me then you’ll be aware that I’m not especially crazy about this feature and tend to prefer to use a dildo just as a dildo, but it is quite nice to have the option there, and you can always use the bullet separately if you don’t want it inside the toy. The bullet itself is almost identical to the RO-80mm from Rocks Off, so that review is the best place to go to get a full idea about the intensity of it. It’s pretty simple to fit into the bullet hole in the Duchess, and thanks to some internal ribbing within the hole which acts to prevent a vacuum from being formed, it’s also removed relatively easy. My general problem with toys with bullet holes is that the hole is in the base, and you want the vibrations down at the tip, but they simply don’t travel that well through inches of thick silicone, so I just don’t find it worthwhile, but that’s very much a personal thing.

At this point I feel as though I’m really expected to pick a favoured toy and suggest that everyone should really buy one over the other, but that’s something that’s hard to do. Truth be known I like both toys equally, but for different reasons. If you own more than one toy then you’ll understand that sometimes you want different things when you go reaching in the drawer to pull something out. Sometimes you crave a firmer toy, and sometimes one that’s softer, so a lot of the choice between the Duke and Duchess will be decided by personal preference. What I will say, though, is that in my considered opinion I think the Duchess makes for the better anal toy, if only for the comfort factor. The extra squish in it makes it easier to get that bulbous tip into the body, and you can afford to be a little more reckless when thrusting it like a jack-hammer. It performs just as well on the prostate, so you’re not sacrificing anything for the comfort. The only thing left to consider really is if the 32% extra cost is worth it for you. Either way, I’d fully recommend it to anyone who enjoys intense prostate stimulation and a full feeling from their toys.

Thanks to Tantus for sending me the Duchess, and it’s available directly from them.