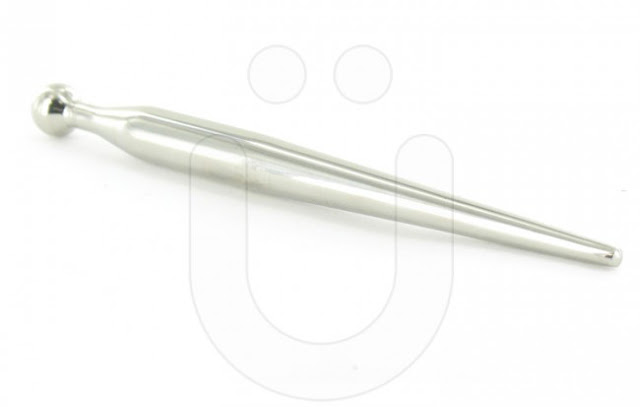 This week I’m going to be delving back into the world of urethral sounding thanks to Uberkinky and a new one of their penis plugs they’ve sent to me. It’s been a little while since I’ve tried a toy of this type, but when I saw the Straight to the Point penis plug stretcher I was quite intrigued by the general design of it and I thought it would be fun to try out.
Head below to catch the review!
The “Straight to the Point” plug – also known whimsically on the packaging as the “Tapered Elephant Dart” – is a little unusual in the world of urethral sounding in that it’s not a uniform thickness throughout its length. In fact it’s more akin to the Oxballs sounds that I reviewed a few years ago in terms of its general design. As the name might suggest it’s designed to be used as a urethral stretcher, starting small at one end and gradually tapering up to a 10mm diameter at the other, allowing the user to slowly expand the size of their urinary meatus. At 4 1/2″ in insertable length it’s more sound than it is plug, but with its functionality it serves as something of a mid-point between the two toy distinctions.
The sound is made from a single piece of stainless steel and polished to a high sheen. As one would hope from a toy of this type it’s manufactured to a very high standard, and the surface of the piece is completely smooth and free from any lumps, bumps, scratches, or indeed anything else that might risk irritating the urethra.
The shape of the sound reminds me of a longer thinner version of the Metal Worx Teazer butt plug, with its rounded tip, tapered body, and then the way it narrows in again at the top before finishing with a spherical adornment on the end. One thing I did notice when I first examined it was that the tip isn’t quite as round as it actually seems at first, and there’s a slight angle where the rounded part of the tip meets the straight edges of the shaft. I’ve illustrated this to make the point more easily. This is something that I’d consider less than ideal because wherever you have a pointed part of an object it’s going to create greater pressure on whatever it’s pressing against.
In use the sound is generally quite a pleasant experience. The narrow tip passes easily into the urethral opening and down through the spongy head until it meets the firmer shaft. Beyond this point I did find the need to progress fairly slowly with the sound however, due to the aforementioned incomplete roundness of the tip. The angular parts of the tip caused some slight discomfort as they scraped along the interior of the urethra, and this did mar the experience somewhat. Back up at the tip of the penis and the steadily widening shaft of the sound was passing quite easily inside, and eventually the whole thing disappeared down there. Personally I didn’t feel that there was much of a stretch happening, despite this being thickest metal sound I have, and nor would I consider my urethral opening to be anything other than average in size, but obviously individual experiences will vary. One thing I really liked about the sound though is that once it’s fully inserted it actually stays in place. The thick part of the shaft helps to anchor it within the head while the thinner neck and ball-tip protrude, preventing it from automatically emerging again as soon as you let go, which is my experience with all other sounds.
To draw a comparison with the Oxballs sounds which I mentioned earlier, I actually prefer this one. The Oxballs have the advantage of the soft, flexible, rounded tips, but despite this one being so rigid it’s the shiny metal surface which helps the toy to glide in more easily. The stepped one of the Oxballs sounds is 12mm at its widest point, but I never managed to insert it that far, because instead of acting as a useful stretching tool it would merely get stuck at the urethral opening and tug at it.
On the whole I do like the Straight to the Point penis plug stretcher, but the thing that makes me hesitant to recommend it outright is the issue with the tip. It’s a really niggly little flaw that detracts from the product, and you have to bear it in mind. You can still potentially get a lot of use and enjoyment out of the product, you just have to be prepared to insert it slowly and contend with a little discomfort.
Thanks to UberKinky for sending the product to me, and you can buy it from them right now.
Tweet
Pin