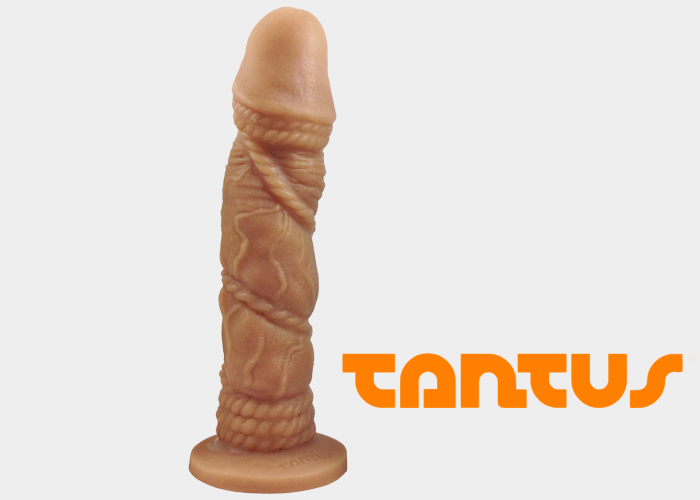 I’ve finally reached the bottom of my lovely box of new Tantus toys that I’ve been dutifully working my way through since August, and so I now present to you the Bound!

When Tantus announced the Bound last year it was a toy I took one look at and knew that I had to have, so when Peyton offered to send me a few new pieces to review it was right at the top of my list. The Bound is actually the product of a partnership between Tantus and those awesome folks at SheVibe, though their combined venture “Vibeology.” When you think of Tantus’s superb quality toys, and SheVibe’s amazing artwork, it’s almost a match made in heaven, and I was eager to see the fruit of their labours. You can catch the review below.

At the centre of the Bound is the phallus, and wrapped around it tightly is this chunky rope which starts at the base and steadily coils its way up the shaft before securing itself beneath the head. The shaft is visibly engorged and resisting its restraints, bulging outwards in the sections between the lengths of rope, and with veins pronounced along the surface. There’s so much detail everywhere, from the knots in the rope to the wrinkles and folds in the skin, and the shallow meatus carved out of the tip of the bell-shaped glans. It’s hard not to be impressed by what’s been created, and especially the way it comes alive and looks animated, like the Incredible Hulk’s muscles swelling up and about to burst through the seams of Dr Banner’s shirt.
The dildo is 7″ from end to end, and after subtracting the base you’re left with around 6 1/2″ that are usable, which is a good size without being huge. In terms of girth we’re talking between 4 3/4″ and 5″ circumference, which is a little on the slim side, especially for my taste, but when you consider all the detail and texture in the design it might be a practical measure. The base is nice and thick and strong, great if you’re planning to use it in a harness, and it’s 2 3/8″ in diameter giving it a nice broad footprint to stand the dildo upright on.
Like all Tantus products the Bound is made from 100% platinum silicone, which is a wonderful odourless, tasteless, and completely body-safe material. The surface of the dildo has a matte finish to it, and the silicone itself is actually quite firm. This took me by surprise initially as I used it right after the Amsterdam, which has this wonderful soft squishy feel to it, and I’d assumed that with all the detail and texture on the Bound it would use the same, but this is something I’ll come back to later.

The construction quality of the Bound is generally good, but I’m afraid to say it does fall a little short of Tantus’s usual impeccable standards, and I did highlight a number of imperfections on mine. These included: several pinhole-sized surface air bubbles; thin pieces of loose silicone flaking away from grooved areas of detail; lumps of excess silicone in places where they didn’t belong, with a shiny surface as if someone had tried to partially remove them with a craft knife, including a piece almost entirely blocking the meatus; and also some areas where the detail seemed less pronounced than it should be when compared against photographs, due possibly to imprecise moulding. Now I’m not usually in the habit of making excuses for companies, but because I do like Tantus so much I feel a little more understanding about the situation. None of these problems really affect how the dildo will be used, and I can see how with such a massive amount of detail there are about a million extra things that could potentially go wrong in the manufacturing process, but with such a unique-looking dildo it is a shame for it not to be perfect. That said though I won’t be too critical here because I love what Tantus are trying to do, and I wouldn’t want to discourage them from another similar undertaking.

So what’s left to say about the Bound? Conceptually I love this piece; I love the look, the design, the artwork that goes with it, the whole damn idea. It’s brilliant as far as I’m concerned. The execution of it on the other hand I’m less crazy about. The construction of it wasn’t quite as perfect as I would have liked, and from my perspective, for my uses, the type of silicone just wasn’t right. As an anal toy I couldn’t recommend the Bound, and in its current form I think it’s one best left to the ladies to enjoy. If there’s ever a Supersoft version showing up in a grab bag somewhere then you can bet I’ll be jumping on it, because I still see potential in this great design. For now though, this little Bound is off to live on a shelf somewhere, as a piece of phallic art and potential talking-point for visitors to my bedroom.

Thanks ever so much to Tantus for sending this to me, and you can grab your own Bound directly from them.
Tweet
Pin