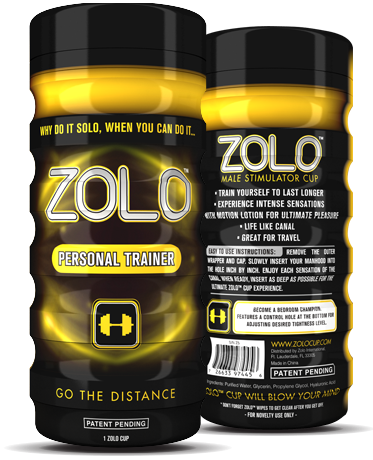 A couple of weeks ago Peter from Bondara got in touch and asked if I’d be interested in reviewing one of the new Zolo products they had in stock. Zolo wasn’t a brand that I was familiar with before, but it’s an American company (with products manufactured in China), that specialises in a series of male masturbators very similar to those on offer from the Japanese company Tenga. I hate to use the word “knock-off” but that is immediately what sprung to my mind when I saw them, so it remains to see whether they’ve managed to take Tenga’s idea and improve upon it in some way, or if indeed it’s just a poor imitation. I reviewed the Tenga Cup a few days ago, so let the comparisons begin!

Like the Tenga Cups the Zolo Cups are a range of single-use disposable masturbators, and there are seven to chose from in total, each with a slightly different internal texture. I was sent the “Personal Trainer” unit which claims to be able to help you “Improve your performance in the bedroom” and “train yourself to last longer,” a little bit like their answer to Fleshjack’s Stamina Training Unit.
The Zolo is a similar size to the Tenga cup, measuring in at 6 1/4″ tall by 2 5/8″ wide, again putting it in that sort of beer can territory. It has a slightly more basic design to the outer casing, with the plastic shell being largely cylindrical, only broken up by 5 shallow grooves running around it, and these are spaced out in such a way to give you a convenient place to rest your fingers for a comfortable grip. The interior is filled with an entirely unknown material, but which I’m guessing from the look and feel is a slightly sticky form of TPE. I’ve checked the side of the packaging, the manufacturer’s website, several different retailers’ pages, and I’ve even tweeted to Zolo, but still I haven’t found an answer about the material, so make of that what you will. Like the Tenga again it’s built as a self-contained unit with only a cap for access at one end and a vent hole at the other, so there’s no taking it apart.
When I popped the cap off for the first time I was surprised to discover that the Zolo doesn’t actually come pre-lubricated, which was one of the features I really liked about the Tenga as it makes it instantly ready to go as soon as you want it. Instead the Zolo comes with a 10ml sachet of lubricant crammed into its cavity for you to gingerly pull out, then tear open and squirt into the chamber. It doesn’t sound like a lot of lube, or indeed look like that much in the sachet, but once you’ve emptied it all into the cup it actually proves to be quite a generous amount.
Inserting myself into the Zolo for the first time was a little uncomfortable because I discovered a ring of dry foam packed directly behind the orifice, and this scraped over the head of my penis before I got deep enough to to reach the nice lubey TPE part. I found I could only get about a third-halfway into the Zolo before I got stuck, so I removed my penis and the ring of foam promptly popped out with it. I double checked the packaging to make sure I hadn’t missed some instruction to remove it, but there was none, and I decided to leave it out anyway, despite the orifice now hanging loosely like a limp slice of wafer thin meat. The second insertion was much more successful; no more discomfort and I managed to get in all the way, though I didn’t feel as though I was in as deep as with the Tenga, and the loose material around the orifice had popped out and stretched down my shaft like a hungry pair of lips. Like with the Tenga the Zolo does feel similarly snug when you’re fully inside it, and if you let go of it it will pop right off the end of your penis, but it should still be usable for people with a broad range of penile girths.
The inside of the cup does feel quite nicely lubricated once you’ve got the full sachet emptied in there, but the word I find myself drawn to is “sufficient.” The lubrication is sufficient to use the toy, but it’s definitely not there in such liberal quantities as with the Tenga, nor is it of such a slippery consistency. The lube feels quite thick and quite gummy to the touch, so while it does lubricate you don’t get quite such a slick motion. Personally I would have preferred to use a lube of my own, one of a good quality that I trust, such as Give Lube, or Gun Oil, as I feel that would have given a better result. The other issue I found is that lube does tend to leak out of  it during use, possibly because I had to remove the foam pad, so I found a lot of it congealing in my pubic hair.

The central channel of the Zolo is textured, and like with Tenga it’s not the same texture throughout, but rather separate and distinct areas each with its own assortment of bumps or ridges as it may be. One of the nice features of the Zolo is that is actually has a cutaway diagram of the internal texture printed right on the side of the case so you can refer to it during use, and this was especially convenient for me as a reviewer when I was trying to figure out exactly what I was feeling at each depth. The inside of the toy is very soft and feels comfortably pleasurable as you’re thrusting away with it, but I found the textures much less discernible than with the Tenga, which came as a surprise to me as this is supposed to be the “Personal Trainer” model. I was expecting something with a much stronger sensation, delivering a sort of stimulation that I’d have to work hard not to react too, but instead it was just a mellow feeling of the head of my penis being gently massaged by something altogether non-distinct. My favourite area of the texture is right at the very start, where there lies a series of small ridges, and these are easily identifiable. The ridges mostly give pleasing stimulation to the corona of the glans, with some occasional reaction from the frenulum. Beyond these are a series of bumps, and every now and then you’ll feel one tickle the frenulum satisfyingly if you have the Zolo orientated just right, but otherwise it’s easy to miss them as they’re slightly too spaced out. The rest of the channel is supposed to have a few bumps and ridges along it, but from what I could tell it might as well have been smooth, not that there’s anything wrong with smooth; my first Fleshjack had no texture and I still enjoy giving it a whirl on occasion.

I found that my preferred way to thrust with the Zolo was to focus on the entrance to the toy, with lots of short strokes to catch the ridges and bumps, only occasionally going the full depth to add some variety, and this was actually pretty satisfying and pleasurable. Like with the Tenga it’s not over-stimulating, in fact it’s even less stimulating than the Tenga, so you can carry on for a long while with it, and you still get that lovely feeling of something soft and slippery massaging the head of your penis with each stroke. It’s definitely better than just a hand alone, and despite the build up being quite relaxed, after a sufficient amount of time spent edging with the Zolo it delivered quite the powerful orgasm, so there’s no complaining about that.

In terms of suction it works pretty much the same way as the Tenga; I don’t see that either one has a real advantage over the other, so I might as well just repeat my thoughts verbatim from the other review. In fact the only real difference is that the Zolo makes more of a farty noise compared to the Tenga’s slurpy sound, but I feel like I’m really lowering the tone with this sentence. The vent hole in the top of the Zolo allows for air to escape during use, and its other purpose is for creating suction by covering it with a finger during the out stroke. This actually works surprisingly well, and you do get a strong sucking sensation from it, but in the process it diminishes the amount of texture you can feel, so it’s a trade off.

I have to say that on the whole I actually like the Zolo cup, but I’ve also reached the conclusion that there is no doubt that it is indeed a Tenga knock off, and on every point the Tenga just edges out ahead of it and beats it. So then, would I recommend it? Well for this one we’re going to have to talk about price. If it were in fact a cheaper knock off then I’d be sat here saying to you “go ahead, buy it! Save a couple of quid and you won’t mind the drop in quality for that price.” The fact is though that it’s not. The folks over at Bondara currently sell the original Japanese-made Tenga Cup for a bargain price of £9.99, while the Zolo Cups are all £11.99. For me that makes it a no brainer, buy the Tenga and get something better for less money.

Thanks to the folks at Bondara for sending me the Zolo Cup to review. You can check it out on their website, along with the rest of the range, and you can also buy the original Tenga Cup there.
Tweet
Pin