This month the lovely Hella from ElectraStim (whose name I find myself wanting to yell out in the manner of Stanley Kowalski from Tennessee Williams’ “A Streetcar Named Desire”) got in touch with me and asked if I’d care to review one of their products, and of course I jumped at the chance, never being one to turn down the opportunity for a new experience.
Electro-stimulation devices have been something that I’ve been aware of for a while, but up until now I’ve never tried one because they’ve always seemed to be something of a niche product in a market dominated by all things vibrating. Without wanting to give away too much too soon, now that I’ve tried one I have to say that that’s a notion which really needs to change.
ElectraStim kits come in a variety of different configurations and with different accessories, all depending on your preferences and budget. The bundle I was sent contained all the bits and pieces shown in the image above, including the Flick Duo base unit, four conductive adhesive pads, and two conductive rubber cock loops which are usually sold separately. I’ll start with an overview of the unit itself, then go into detail about how it performs with the pads and loops
The Flick Duo is a compact, portable, rechargeable ElectraStim unit, and all of those qualities came as a complete surprise to me. For some reason when I had envisioned the equipment for this type of play, the picture I had in my mind was of a big bulky unit which plugged into the mains, the likes of which you’d use at school for building circuits, rather than something which comes packed up in a sleek black presentation box, with its own cloth pouch, and is charged by USB. The unit itself has a small lightweight profile, and incorporates a sleek, retro, and almost industrial design which feels refreshingly authentic. Rather than being overly modernist and adopting some nondescript white shell, the EM80 is black and grey with shiny metallic accents, features red and orange glowing LCD displays, alongside orange and green LEDs, and it has real buttons which make a satisfying click when you push them. In all it wouldn’t look out of place as part of a control panel on the original 1960s starship Enterprise, and I like that. Even the cables for the accessories have red and black plugs and wires, giving it that real feeling of electrical equipment.

The Flick Duo is a dual-channel device, which in layman’s terms means that you can connect two different accessories to it simultaneously and control them independently via the buttons on either side of the panel. There are some accessories, however, which require the use of both channels at once, but they won’t be the subject of this review. Each channel has 25 different intensity settings which can be adjusted incrementally using the up and down arrows, and which is indicated by a number in a small display located above the buttons. These range from a mild tingling down at setting 1, to quite a powerful jolt at 25, meaning you can use the unit for pleasure, but also pain in a BDSM scenario if desired. In addition to the 25 intensity settings there are 8 different patterns to choose from during use, with 1 being a constant flow of electricity, and 2-8 being a selection of pulses occurring at differing speeds and intervals. These are cycled through using a button in the centre of the panel, and as well as a small display indicating which pattern number is currently selected, 2 orange LEDs flash in time with the pulses to give a visual indication of what’s happening.
The unit requires charging prior to use and a full charge should last for 3 hours. I found that the initial charge was quite fast, taking less than 2 hours in total, and handily there is an LED on the display which goes out as soon as the charge is complete.
The other feature of the Flick Duo which is included in the name is the “flick” function. If you hold down the pattern select button on the device you can put it into flick mode, which makes the whole unit motion sensitive. Once you’ve set the power level for the channel(s) you’re using, a flick of the wrist whilst holding the unit will cause a brief spike in intensity. The harder you shake it the stronger the jolt will be, and a little glowing indicator in middle flashes depending on how much force you use. This is a bit of a fun feature, but not one I really use much myself. I imagine it would be more interesting in conjunction with a partner, and taking it in turns to give each other little jolts.
Adhesive Pads
The adhesive pads which come with the EM80 kit will look immediately familiar to anyone who’s ever had an ECG in hospital, or owned a TENS machine. You get four in total and they’re used in pairs, one pair for each channel of the base unit, though in my experience one pair at a time is probably enough when you’re using the device by yourself. The pads all come with a clear plastic backing which is used to protect the sticky surface from dust when they’re not in use, as they’re completely reusable provided you take a reasonable amount of care with them. Once you peel off the plastic backing you’ll realise that the surface is incredibly sticky, and this helps them to adhere very firmly to wherever on the body you attach them. For me the obvious place to attach the pads is along the perineum, though it’s worth mentioning that it’s preferable to have shaved the area first, else you’re in for some uncomfortable hair pulling when you try to remove the sticky pads afterwards. Alternatively you could try attaching them to either side of the head of the penis, or wherever you find sufficient room to place them along the shaft. Once you have the pads in place you need to connect them to one of the supplied wires. The red end goes on one pad and the black on the other, then you plug it into the base unit and you’re good to go.
When you turn on the unit and set it to the 1st intensity you begin to experience a mild tingling all over the skin beneath the pad, and then as you increase the power it starts to subtly change. The tingling increases, but then it becomes peripheral, secondary to some other sensation emanating from the pad. The interesting thing about the pads is that they have to deliver the strongest sensation that I’ve felt from the accessories I’ve tried, such as the loops that I’ll discuss below. They’re very conductive, and they have a wide surface area, so they really transmit the electric current into the tissue, and the impact can be felt significantly. The first time you try it you’re liable to be quite amazed by what you feel, because there’s just this sensation that’s happening and it’s so unique that it’s almost indescribable. It’s like a feeling of some unknown force being applied within the body. It’s strange, and it’s different, but it’s good, it’s really good. Whatever this force is, it’s gripping you around the perineum, almost feeling as though pressure is being applied for a perineum massage, yet it’s travelling deeper into the pelvic floor muscles. It’s partly sexual, but there’s also something relaxing and therapeutic about it, as if it puts your body at ease. I feel as though I could happily walk around all day experiencing it, but once you pair it with masturbation that’s where you really feel its effects. When you’re slowly edging and you feel your body contract the pelvic floor muscles in response, having that sensation of the ElectraStim on top just intensifies it and makes it feel all the better. It’s like supercharging your own body in preparation for an explosive orgasm.
ElectraLoops 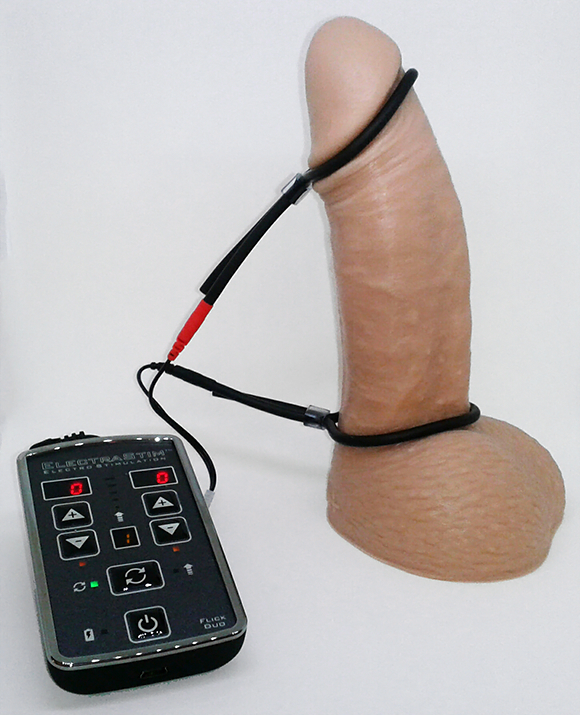 Thanks to ElectraStim for providing me with the product to review, and if you’d like to buy one then they’re available  from CloneZone and Lovehoney