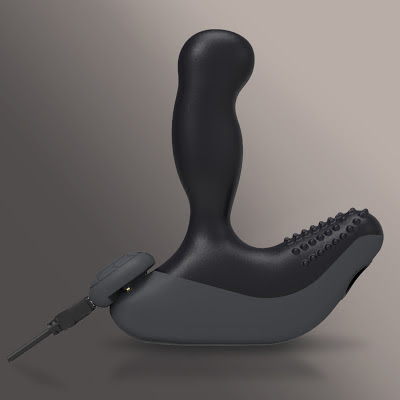 A couple of weeks ago the folks over at (the sadly now defunct) Strawberry Blushes got in touch with me and asked if I’d like to review a product for them, and out of all the wonderful items to choose from in their catalogue, the one which stuck out to me the most was the Nexus Revo 2, so I was thrilled when they generously agreed to send it to me.

The Revo 2 is the successor to the original Nexus Revo prostate massager, which as it happens is a product that I’ve had my eye on for quite a while now. The Revo 2 was only announced at the end of last year, and up until recently hasn’t been widely available to purchase, so it’s always fun to try out something so new.

When you think about choosing a prostate massager, generally there are only two main considerations to take in terms of functionality: do you want something that’s manually operated or hands-free, and do you want something which vibrates or something which doesn’t? Beyond that your choices are pretty limited, which is what makes the Revo line so special, because they really are a first of their kind. What the Revo offers that other prostate massagers don’t is motion, physical motion. It’s actually not at all uncommon to see toys for women with moving parts, such as many rabbit vibrators with shafts that rotate and twitch about, so naturally I’ve always wondered why nothing like that existed in a prostate toy for men. It makes me rather please, consequently, to see that now something like that does indeed exist. The name ‘Revo’ is short for the dword revolve, because that’s precisely what the shaft of this toy does, and what sets it apart from every other product in this category.

Physically the Revo 2 is quite similar in design to other prostate massagers, and has that distinctively-shaped insertable portion which you’ll recognise from the G-Rider. Alongside this it features a standard forward-projecting arm designed to sit flush against the perineum, and this forms part of quite a large and bulky base section which houses both the battery and presumably the mechanism to rotate the shaft.

The Revo 2 is made from a combination of ABS plastic, and silicone which coats insertable sections. It has a two-tone colour scheme allowing you to visually differentiate between the plastic and silicone portions. On mine it has a black silicone section, while the plastic area is Playstation-grey, but it’s also available with the colours reversed. Aesthetically it does look quite nice, though there’s a certain inescapable cheapness that I find associated with the appearance of grey plastic. I recall seeing the original Revo in a purple option, so it’s a shame that they didn’t carry that through to the Revo 2, as I do enjoy a splash of colour in my toys. The choice of materials for the toy is great as both the plastic and silicone are completely odourless, non-porous, and body-safe, so you can feel confident when using the product.

The construction of the Revo 2 is done to a high standard, with the possible exception of the occasional mould line here and there, but these blend in quite subtly with the soft velvety finish of the matte silicone layer, and can barely be felt. One of the big differences with the design of the Revo 2 is that it’s now waterproof, which should make cleaning it a far more simple affair.

The other major difference with the Revo 2 is that it’s rechargeable, and that’s a change which I’m glad to see they made, as for a toy of this price I’d expect not to have to be dealing with batteries. Like the Ego E4 the Revo 2 is supplied only with a USB charging cable. I must say that I’m not a huge fan of this practice as I don’t enjoy having countless devices plugged into my computer to charge, though I can see how it might benefit people who travel a lot and are happy to charge things from their laptops. There is always the option of buying an adaptor plug which will allow you to plug your standard USB charging cable into an ordinary power socket, but it does mean an added expense on top of an already pricey toy. The charging cable connects to the Revo 2 magnetically, and it attaches firmly enough to do the job adequately, though the design behind it isn’t quite up to the standard of the Fun Factory Click ‘n’ Charge system. You can leave the Revo 2 sat in a variety of positions, and the charger seems to say put quite happily, which is useful because the rounded underside of the Revo 2 makes it hard to stand upright.

When it comes to using the toy it is rather comfortable to insert, though it may present a slight challenge for beginners to anal play, as the tip of the shaft is rather blunt and has a 4″ circumference. As such I’d recommend a warm up toy in this circumstance. Once it is inserted, and not yet activated, it does just feel like any other prostate massager, though immediately the shortcomings of the large and cumbersome base start to become apparent. Unfortunately because the base is so large you simply can’t sit on it, at least not in a manner which is at all comfortable. This is a disappointment for me because I do prefer to assume a more seated position on the bed when using toys such as this.

Once you turn on the Revo 2 and start to experience to motion of the shaft it becomes apparent that there’s a bit of a design flaw. The initial sensations coming from the rotations are quite subtle and not all that easy to feel, and then you realise the reason why. If you look down at the device you’ll see that the base is moving around quite a lot outside the body, and as a result the shaft is moving less internally. There’s nothing to hold the base in a stationary position, so it’s a bit like holding a helicopter by the rotors and having the body of the craft spin around instead. The only way to try to counter this is to a.) hold the base in place with your hand, which then makes it no longer a hands-free toy, or b.) hold it firmly in place against a surface by sitting on it, which as I mentioned earlier is not comfortable, so neither solution is ideal.

When you have successfully secured the base you’ll discover that the motion of the shaft can be felt much more strongly inside the body, which unfortunately brings me to the next problem. The shaft is too long. Now the shaft is in fact only 4″ long, which doesn’t sound like a great deal, but the thing is that the prostate is not 4″ deep inside the body. When you can really feel that shaft moving you can feel exactly where it’s touching, and every time that head moved around in a full circle it felt as though I was being poked firmly right in the back of the bladder. For me being poked in the bladder is a little uncomfortable, and doesn’t really increase my sexual appetite, so every time I tried the toy I just couldn’t seem to enjoy the way this felt. What I did discover though was that if I pulled the toy about halfway out, and held the base firmly in place, then as the toy rotated the head would actually hit my prostate, and it felt pretty nice in the process. This was a little frustrating though, because it proved that the concept could work in principle, but that the design was just at fault. Had the shaft been an inch or two shorter then I could be raving about it right now instead of being critical. What I originally liked about the toy was the idea that something electronic could duplicate that “come hither” motion that people use to stimulate the prostate with their fingers, and had it managed to achieve that then it would have been fantastic. It came so near, yet it was also so far off.

The other aspect of the function is that it can be set to vibrate along with the physical movement. The source of the vibrations appears to be located down in the base of the toy, which is unsurprising considering all the mechanics going on in the shaft. The vibrations aren’t the strongest in the world, but what’s unusual is that they appear to get buried inside the toy. I wouldn’t expect to really be able to feel them at the tip of the insertable section, but you can’t feel them that strongly along the perineum arm either. The vibrations just don’t seem to travel up to the surface of the toy and focus anywhere along it, instead they seem to get lost deep within the base of the toy and dissipate out in all directions. All you get is a vague tingle emanating equally from everywhere and it doesn’t add much to the experience, whether set to constant or pulses.

One nice thing about the toy is that it isn’t overly noisy. It isn’t completely quiet, and you do get a strange mechanical whirring noise going on when it’s activated, alongside the humming of the vibrations, but it’s mostly unobtrusive to hear, and it won’t be audible to anyone in another room.

The Revo 2 does come inside a lovely black cardboard presentation box, which helps to make it feel expensive and luxurious, and included with it is a black cloth drawstring pouch for everyday storage.

On the whole I’m probably not going to recommend the Revo 2 to anyone, and by this point that shouldn’t come as a surprise. I really do love the idea behind it, and the fact that Nexus have gone and created something quite innovative, but the performance of it really just doesn’t work for me. The clincher here really has to be the price though, because it does currently retail for £120, and I just couldn’t justify spending that amount of money on it. If you’re spending over £100 on a toy then you’re really going to expect a lot of bang for your buck, and not something which vibrates meekly whilst prodding you in the bladder. It was definitely an interesting experience for me to try out, and an educational one at that, but unfortunately not one I would have been happy to pay for the pleasure of. My quest for the perfect prostate massager is destined to continue for now.

If you’re interested in the Nexus Revo 2 then it’s available from: Bondara, Lovehoney, SexShop365, and UberKinky in the UK.

Thanks to Strawberry Blushes for sending me the item, though they may no longer be around.