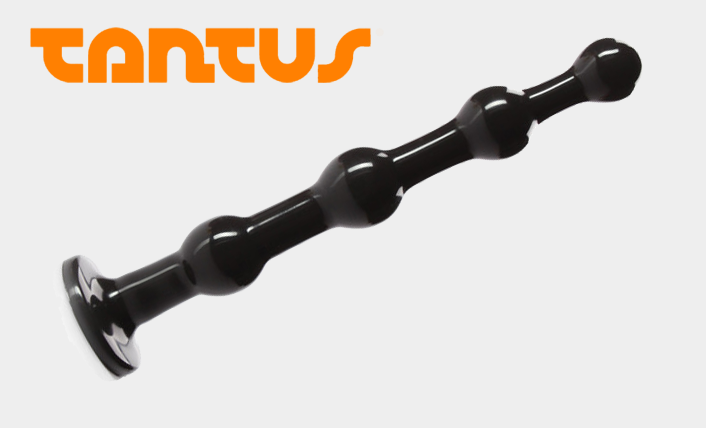 One of the first things you’ll notice when it comes to using the beads is just how floppy they are, but this is simply down to the long and thin nature of the design, and the silicone is identical to that used in other Tantus products. This property plays a factor when it comes to inserting the beads as you’ll want to guide them in from the tip, rather than trying to push from the base. The surface of the beads holds lube very nicely and that first bulge will enter the body ever so easily, accompanied by a small ‘pop.’ Because the beads aren’t too wide, and the material has a nice amount of give in the surface, insertion feels very gentle on the sphincter and even the most inexperienced beginner shouldn’t feel any discomfort. The rest of the bulges are much the same story as the first, and despite the slight increase in size it doesn’t feel noticeable on the way in, just provided that you stay relaxed. What may come as a surprise is just how easily the whole 8 3/4″ can be inserted into the body; typically after 5″ or so of a toy you’ll feel the tip poking somewhere inside, but the wonderful flexibility of the material and the relatively narrow tip helps the beads to snake all the way up through the rectum and into the sigmoid colon. Usually trying to get anything that deep inside the body requires a degree of experience, but these beads are very adept at finding their own way and avoiding any resistance, so you might even not notice how far you’ve gone until you suddenly realise that you’re sitting right down on the base. The advantage that these solid-form beads have is in achieving that depth, whereas the beads on a string are liable to just bunch up in a coil inside the rectum, never going much further. Once the beads are fully inserted the sphincter comes to a rest along the smooth neck portion of the toy, and this helps to hold it inside the body. If you wanted to you could leave the beads there as though they were a butt plug and walk around like that without them coming out.
Anal beads are designed primarily as an active toy rather than a stationary toy, and its with a mind to removing them more than it is inserting them. The beads come out just as easily as they went in, and this time the base can be used as a handle to pull on in the process. As the beads come out you get a series of little pops as the sphincter passes over each bulge, but they’re not a major event. The downside to the solid-form beads is that the sphincter doesn’t close completely between each bulge like it would if there was a string there, so instead of going from closed to open as the beads are withdrawn, it goes from slightly open to slightly more open, which lessens the impact. For the more novice anal user the sensation that it delivers will probably be enough to feel quite satisfying, but a more experienced user would likely desire a larger ‘pop’ that can only come with a thicker toy.
One of the slight downsides to the toy is that once you’ve removed it you can’t stand it upright anywhere on its base. The floppiness of the material causes it to immediately droop to one side, shifting the centre of gravity, and causing it to topple. Either you re-insert it again as soon as you’ve removed it, you take it to the bathroom to wash it, or you clear an area where it’s safe to lay down a lube-covered toy. 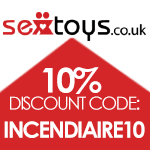