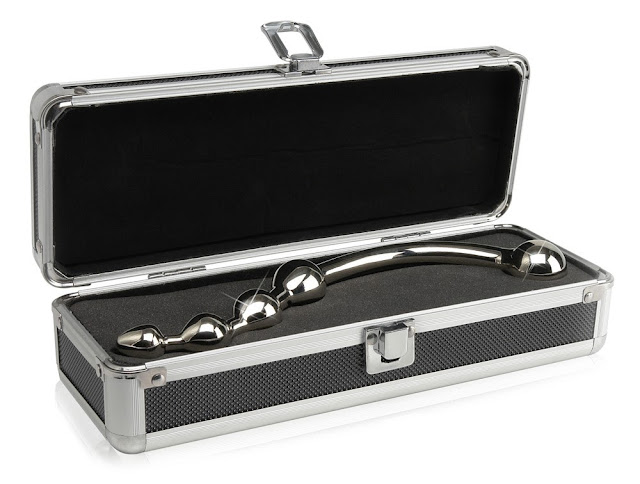 Ever since I reviewed the Metal Worx Teazer this summer I’ve been dying to try out some more pieces from this range, and my new friends over at Simply Pleasure were generous enough to send me a Metal Worx Curve to test out. Find out how I got on with it after the jump!

The Metal Worx Curve is one of those toys which I really enjoy writing the review for, simply because it surprised me. I’ll be honest when I say that despite how much I like the design of it, initially I was sceptical about how effective it would be during use, and without spoiling the review let’s just say that it  does the job.

The Curve is made entirely from highly polished steel which gives it a rather stunning appearance, as well as making it quite a heavy and sturdy toy. Unlike some products, such as my njoy Pure Plug 2.0, it’s not made from a stainless steel, and you can actually tell this from a slight difference in the colour. This doesn’t alter its properties in any significant way, except perhaps when it comes to caring for the toy, and I’ll mention that briefly later. One of the best features about metal is how well it conducts heat, which naturally makes it perfect for temperature play. In this regard it is many times better than glass, which is another popular material for this. When you pick the Curve up at room temperature you get the impression that it’s already cold, which is handy if you enjoy low temperatures as it reduces the need to wait while it chills in the fridge. If cold isn’t your thing then simply holding the Curve in your hands for a few seconds will be enough to bring it up to a more comfortable temperature. Personally I don’t consider the Curve to the the type of toy you’d want to use for temperate play as it’s more of an interactive toy, and therefore different to how you might slip a cold plug into your body and leave it there, but this might just be an individual preference so it’s great that you have the option. Because the Curve has quite a slender design it does change temperature more quickly, so it will suck heat out of the body and warm up rapidly during use. If you really want to keep it cold then it’s handy to have a bucket of ice water nearby, as a quick dunk in there will have it back down to frigid temperatures in no time. Similarly if you like your temperature play at the other end of the spectrum, a dip in a basin of hot water will also do the trick.

When it comes to using the Curve the two different ends serve quite separate purposes, at least as far as I’m concerned. The tail end is what I think of as the warm up end. It has a narrow tapered tip which slips very easily into the body, and the individual bulges act like anal beads as you gently pop them in and out of the sphincter and enjoy that sensation. The first three are very easy to insert, but I found the fourth to be a little more tricky, due to the combination of the curve in the shaft and the rigidity of the material. If and when you do put the fourth inside I’d suggest exercising a little caution, as when the muscle slips over the widest point you will feel the Curve being sucked into the body, and if you don’t have it positioned quite right then that sucking action can pull the hard metal tip into your soft delicate insides quite forcefully and cause discomfort. The tail is definitely more the foreplay side of the Curve, as using it largely just teases the anus and helps it to relax and loosen up, but it doesn’t really provide and stimulation deeper inside the rectum. Once you’re done and you decide to flip the toy around you’ll soon discover that the head side is the main event. The ball on the end slides into the body very easily, especially if you’ve already warmed up with the other side. Despite it being a hard and rigid toy it still feels very comfortable during insertion, but it’s also important to know how to relax. With the ball inside it seems to almost immediately find the prostate, and because the prostate is situated in quite a shallow location adjacent to the rectum you won’t need to insert much of the shaft in order to stimulate it. The shape of the toy causes it to curve upwards between the legs into a very accessible position, so you can grip onto the tail section like a handle without having to reach that far to grab anything. As soon as you begin even the slightest of thrusting with the Curve you’ll notice immediate and unmistakable prostate stimulation, and it really took me by surprise. As you thrust the curve of the shaft directs the steel ball on the end firmly into the prostate, and it gently rubs back and forth across the surface of it, mimicking the motion you might use when trying to stimulate the prostate with fingers, only it’s more effective because of the large surface area of the ball. I really wasn’t expecting it to be so effective; most toys seem to only produce incidental prostate stimulation, or at least they require a fair amount of experimentation to get the knack of using them in that way, but with the Curve it was instant. Because of the position of the prostate you really only need shallow thrusts to target it, and this allows you to move from a slow motion to quite a fast one, depending on which suits you best. If you want to feel a firmer pressure on the prostate then it couldn’t be simpler than just pulling the Curve upwards and towards you while thrusting. One sure fire way to tell that the Curve is doing its job is from the spontaneous erection which suddenly pops up after a couple of strokes back and forth across the sweet spot. I’m really not exaggerating when I say quite unequivocally that the Curve is the single most effective non-powered toy that I’ve ever used for prostate stimulation. It’s almost impossible to go wrong when using it as it hits the right spot every time, and avoids frustrating time wasted as you try to figure out where it is and how to stimulate it with other toys, so it’s especially worthwhile for the less experienced in this field. Using the Curve has to be the closest I’ve come to achieving a prostate orgasm yet, and that’s really saying something as my prostate is pretty stubborn. I’m fairly certain that with perseverance I’m going to be able to achieve it with this toy.

You can’t review a Metal Worx toy without talking about the packaging. The Curve comes in a heavy duty case, the style of which you might expect to see bands taking their expensive electronic equipment on tour inside. The corners are all constructed from a lightweight metal, while the side panels are made from a textured black plastic which almost resembles carbon fibre. The lid is hinged on the back and has a firm clasp on the front. Inside the case is foam padding, with a groove cut out into which the Curve fits. I have to say that the Curve doesn’t stay in place quite as snugly as my Teazer does, and I can hear it fall out of place when I turn the case upside, but it’s not a huge concern for me. The case definitely does help to give the Curve the appearance of being precious and expensive, as well as being a great place to securely store it when not in use. The only downside is that the case is a little bulky if you’re short on space, measuring 11 1/4″ x 4″ x 3 1/4″.
The Curve is very easy to clean as metal is a highly durable and non-porous material which is able to be sterilised. You can wash it with antibacterial soap and hot water, wipe it down with a 10% bleach solution, or boil it in water for a couple of minutes. Just be sure to dry it thoroughly when you’re done as it’s not stainless steel, so there is the potential for rusting if you’re not careful. One other thing is that metal does show up fingerprints, so depending on how fussy you are you may find yourself polishing it before putting it away.
Overall I would highly recommend the Curve to anyone looking for a great prostate toy. Don’t be fooled by the unorthodox design, when it comes to anal stimulation the Curve really couldn’t do a better job, and is truly worthy of the investment.
You can buy the Metal Worx Curve from the fine folks at Simply Pleasure.