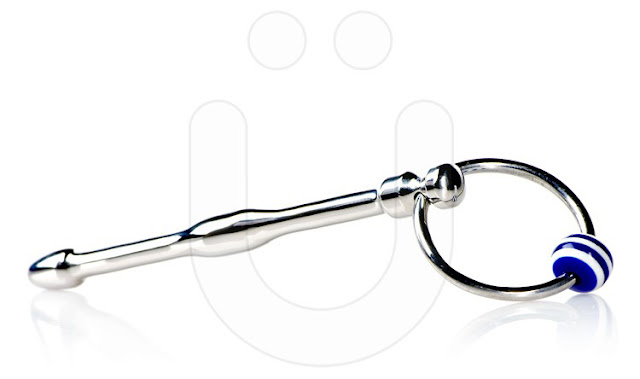 This week I’ve been busily inserting more foreign objects into my urethra, thanks to my new friends over at UberKinky who generously sent me a couple of penis plugs to test out for them. It’s not as alarming as it sounds so check out the review below to learn more.

The Undulating Penis Plug is a 4″ (10cm) long surgical steel rod, designed to be inserted into the tip of the penis. Much like a urethral sound the plug acts to stimulate the penis from the inside, the only difference being that it’s a little shorter. The shape of the plug incorporates a combination of different sized and shaped areas along the shaft, with the widest areas having a width of 8mm, while the two narrow parts are only 5mm.
The surface of the plug is completely smooth and shiny, with a polished surface free from any blemishes or defects, and this is one of the benefits of it being made from metal. When you consider where it’s intended to be inserted it’s very important that the finish be of a high quality, and that it won’t easily succumb to scratches or indentations, as the lining of the urethra is very delicate and susceptible to irritation. The other advantages of metal are that it can be completely sterilised, which is a wise precaution to take before use in order to lower the risk of UTIs, especially if you want to share the toy with a partner, and also that metal is a fantastic material for temperature play, so if you fancy a little bit of cold when you use it you can simply pop it in the fridge or a glass of ice water beforehand.
The plug has an attractive appearance, but it’s rather nondescript on the whole, mostly resembling some sort of strange key that you might expect to find in the bottom of a toolbox. The tip of the plug is vaguely conical in shape, but with a rounded point for safety reasons, and it gently tapers out to its maximum 8mm width over the distance of 1cm. Behind it the shaft of the plug is completely straight and has a 5mm width for most of its length, with the exception of a short bulge in the middle where it gently expands up to 8mm, and then back down again. In total the insertable portion makes up 3 3/8″ of the length, and it’s finished off by an 8mm wide ‘stopper’ on the end, through which a large ring is inserted. The ring is decorated with a blue and white bead, and it acts as a finger-loop to aid with removing the plug, and to prevent the risk of over-insertion and accidentally losing the product deep inside the body. The ring also gives rise to the possibility of attaching weights to it, tying bondage rope to it, or anything similar you might think of.

When it comes to using the plug you will need a lubricant, and a specialist sterile lube such as Very Deep or Surgilube is recommended as a safety precaution. The tapered tip helps it to slide nice and easily into the meatus and down the urethra, and while the feeling may seem slightly unusual at first you won’t experience any discomfort. After around 1 1/2″ of the plug has been inserted you may begin to notice some slight resistance, at this point the bulge at the centre of the plug will be resting against the end of the penis poised to make entry, so it can be a good time to take a brief pause. With a little gentle, continuous, pressure the rest of the plug will slide slowly down into the penis, until all that can be seen is the stopper protruding from the end. Looking at the penis like this, with the ring and its bead, it’s possible to imagine for a moment what it might be like to have a piercing there.

There are a variety of ways to enjoy using the plug while it’s inserted, and the first would be just to masturbate while it’s there. This can make for an interesting sensation as you can feel the firm metal rod in there when you touch the outside of the penis, and it provides internal stimulation as you squeeze. Often in the course of this the plug will start to slide out of the penis, requiring you to stop and push it back in, and the metal ring also tends to jangle around a bit in the process. Another way is to slowly slide the plug in and out of the penis, and the shape of it makes it especially suited for this. The width of the tip and the wide section in the middle of the body provide two distinct points which can be felt moving around inside the urethra. This is an interesting sensation, and pleasurable in an unconventional sort of way. You can position it so that the central bulge emerges completely from the end of the penis, while at the same time the tip of the plug is stimulating lower down. This moving expansion of the urethra almost feels similar to when the last of a large quantity of ejaculate drips out after an orgasm. Probably the final way to use it is to hold a vibrator to the end and allow the vibrations to pass through it and travel deep into the penis, though I had less luck with this as mine was too powerful and just bounced off the surface.

Most of the time you will be inserting the plug into the penis while it’s erect, but that’s not to say it can’t be enjoyed while the penis is flaccid if this is desired. You can even go from hard to soft, or soft to hard while the plug is inserted if you play around with it for a bit. The plug isn’t ideal for wearing in any sort of extended capacity as there’s no real way to hold in inside the penis, and it will gradually work its own way out, though feasibly you could attempt to strap the ring to something in an effort to keep it in place.

On the whole I’m really pleased with the Undulating Penis Plug and would happily recommend it to anyone who was considering urethral play. The gentle taper of the tip and the modest size makes it suitable for beginners, while the undulating shape will provide enough stimulation to still please those who have used similar products before.
You can buy the Undulating Penis Plug from UberKinky