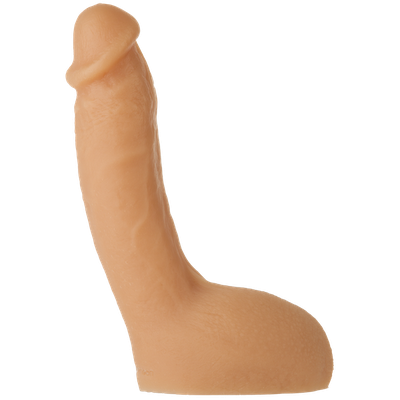 As you might imagine with any sort of dildo cast from a real person, the level of detailing is quite high, though in this instance it’s by no means the best example I’ve encountered. You can make out the major veins running along the shaft, as well as the follicles in the scrotum. The glans also features some noticeable creasing along its surface, and also a shallow groove where the opening to the urethra is. If you look closely you can make out some of the grain of the skin, but it’s not especially clear, and is often obscured by other faint marks which appear to have been left by the manufacturing process. If you were hoping for hyper-realism then it doesn’t quite live up to that, and next to the high quality of Fleshjack pieces it’s frankly sub-par.

The dildo is made entirely from 100% platinum silicone, which is one of its big selling points, as silicone is one of the safest and most superior materials a sex toy can be made from. The silicone seems to be the same formula which Doc Johnson use in many of their other products, and while I’m usually a fan of it, in this instance it’s a shame. The problem is that for this type of toy it’s just too firm. It has a reasonable amount of flex to it, and give in the surface, but when you factor in the shape and the size it could really do with being a lot more plush. The other stickler is the colour; it’s a slightly translucent beige colour, the same as The Original, and it doesn’t especially add to the realism. Personally I would have hoped  that Doc Johnson would have gone the extra mile for this toy, and developed a new silicone formulation with a hue and suppleness which lived up to all the hype, but sadly that was not the case. I’ll say once again, if you want an example of how to do realistic silicone dildos properly then you need only look to Fleshjack.

The dildo comes packaged with a vibrating bullet which can be inserted into a cavity in the base. Despite being 5″ in length the bullet still only extends halfway down the length of shaft, meaning the vibrations are focused nowhere near the tip. The bullet has 3 vibration modes which is better than most offer, but they’re still pretty buzzy and overall I don’t think they add much to the toy. Probably the biggest problem with the bullet is trying to remove it, as the cavity is completely smooth and will form a vacuum once it’s inserted. They supply some powder to be used with it, but this mostly makes a mess, and it still took me 10 minutes of frantic tugging to remove the thing again. Unless you’re certain that you’re going to want the bullet in there permanently then I wouldn’t risk inserting it at all. Your best option might be to re-purpose the bullet hole entirely, and fit in the Vac-u-Lock suction cup which Doc Johnson sell.