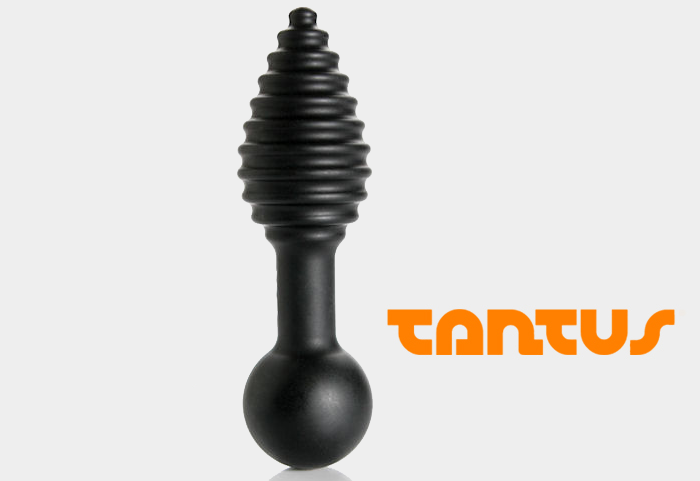 I spotted the Dipper on sale at a massive discount the other week, and being a fan of both Tantus toys and bargains I couldn’t resist snapping it up. Check out the review after the jump!
The Dipper is a highly textured butt plug from Tantus, which presumably takes its name from wooden honey dippers due to the similarity of the grooves, but I find the shape more reminiscent of a tunnel-boring drill.
Like all Tantus toys the Dipper is made from 100% platinum silicone, but it’s made from a firmer variety just like that found in the Goddess Handle. The firm silicone doesn’t have a lot of give in the surface when you try to squeeze it, so it makes sense for this toy as the ridges stand out more and don’t become flattened like they would if the material was softer. The surface of the silicone feels smooth to the touch, but it is matte rather than shiny. As always with silicone the material is completely body-safe and odourless too.
The Dipper is constructed to a high standard and is free from any defects, but unusually for a Tantus product it does have a mould line running around the full length of it. The mould line is understandable as the unique shape of the toy would make it near impossible to manufacture otherwise, but it is quite raised and can be felt when you’re holding it, suggesting that no actions were taken to attempt to minimise it. Personally it doesn’t bother me and I don’t really see it as an issue, it was just a little surprising at first.
The Dipper is quite a small plug measuring in at 5 3/8″ long, but with only 4″ insertable. Around the widest point the circumference is an even 5″, giving a diameter of around 1.5″. The bulb of the plug starts of with a nice pointed tip and has a gentle taper up to the the widest point, after which it narrows down again as it approaches the neck. The bulb is covered with 11 ridges in all, spaced 1/8″ apart and less than an 1/8″ deep, which give its drill-like appearance and create a textured surface. The neck of the plug is quite narrow at only 5/8″, but it works well in proportion to the bulb. The neck is 1 1/8″ long which is plenty of space for the anal muscles to rest along and allow the bulb to sit fully inside the body. The base of the plug, so to speak, isn’t really a base at all, but rather a 1 1/2″ wide sphere, similar to on the Metal Worx Teazer. This ball at the end is sufficient to make the plug completely anal-safe and prevent it from venturing too far into the body. 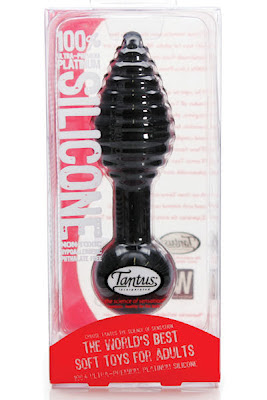 The Dipper is a really nice plug to use, but due to its texture its not one which I would recommend for a total beginner. You’ll need to use a little extra lube with the Dipper as when you attempt to spread it over the surface it does have a propensity to just sit in the grooves. The nice pointy tip of the plug does aid insertion, but the ridges create a fair amount of drag and friction which requires a little extra force to push it into the body. Despite this the plug is still comfortable to insert and the ridges feel quite stimulating. Once the plug is inside the body it feels great; due to its size it’s not that filling but its presence is comfortably noticeable, unlike the aforementioned mould lines which gladly cannot be felt at all. Because the bulb of the plug is quite short the firm pointed tip isn’t a problem in the same way as with something like the Enspiral. The ball at the base of the plug rests up against the anus and nestles between the buttocks. Obviously as it’s round there are no corners to dig into the flesh so it’s a great base for long-term wear. The only real downside to the ball is that it makes it nigh-impossible to sit down while wearing the plug unless you’re on something very padded. Because it is a textured plug the real fun comes from thrusting with it, it’s not a toy just to leave stationary inside the body. One of the fun ways to make the most of the Dipper is to completely relax the body and allow it to begin to work its way out, then just at the right moment clench the anus and pull it back in. You can fully feel the firm ridges rippling over the muscle as the plug moves both outwards and inwards and it really is a wonderful sensation. The other way to use the plug is to thrust manually, and the ball at the base makes for a great handle to pull the plug out with and then push it back in again, whether you’re using it by yourself or on a partner. If you want to feel the texture at its peak intensity then you can clench your sphincter as strongly as possible before attempting to remove the plug. The Dipper is a toy where you really want to make sure you’re completely clean before using, as in the same way that lube sits in the grooves you don’t want to find it dragging any nasty surprises out of the body.
Thankfully because the dipper is a silicone toy it’s very easy to clean and take care of. It can be washed normally with antibacterial soap and hot water, sprayed with toy cleaner, or wiped over with a toy wipe. It can also be completely sterilised, which is great if you want to share it with a partner. Sterilising can be done by boiling it for a couple of minutes in water or wiping it over with a 10% bleach solution. The surface of the toy does tend to attract dust so it can be handy to give it a quick rinse before use.
The Dipper comes in the standard tasteful Tantus packaging, consisting of a simple clear plastic box with some writing on it. For the size of the toy the packaging is slightly bulky so it’s not ideal for every day storage.
Overall I really like the Tantus Dipper and can happily recommend it to anyone who loves textured anal toys; it definitely is a great buy.
The Dipper is available directly from Tantus.
Tweet
Pin