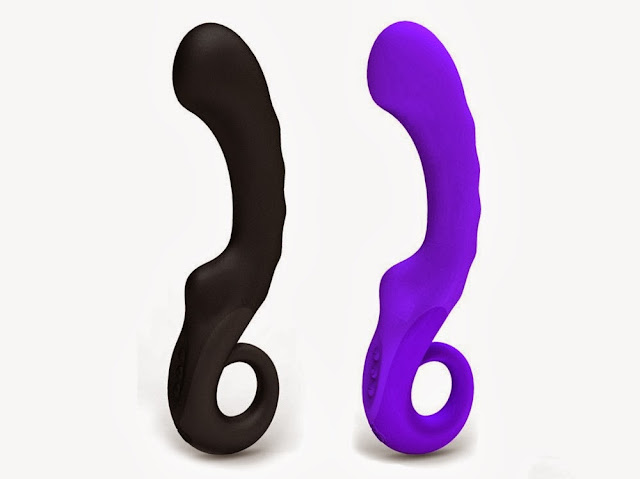 This September I’ve been sent a funky vibrator/prostate massager from Odeco to test out.

Check out the review after the jump!

The product comes packaged in a lovely presentation box which sets the tone of quality from the very start. A thin outer cardboard sleeve depicting the product slides away to reveal a sturdy plain black cardboard box beneath. The inner box is very discreet and wouldn’t arouse suspicion were you to discard the sleeve and keep it by itself. The lid of the box slides off completely and inside is a foam-padded interior which safely houses the toy, the charger, the manual, and also a handy cloth toy pouch giving you another option for toy storage if you don’t want to use the box.

The manual for the toy is rather basic and contains what I would consider to be “awkward” English, i.e. not written by a native speaker, but it’s still legible and explains adequately how to charge the toy. It also has the slightly annoying habit of referring to the toy as “she” and “her” rather than simply “it”, but that may just be a personal peeve.

The insertable portion of the toy is made completely from medical-grade silicone, making it soft and flexible, while the handle is made from a hard ABS plastic with a silicone coating, giving the whole toy the same velvety feeling. Because everything is silicone you know that it’s completely non-toxic and body-safe, as well as being odourless. For a high-end toy you couldn’t pick a better material.

The construction of the Hedone feels very solid and durable, and like it was built to last, which is something that you’d expect from a product in this price range. It also feels quite weighty, slightly more so than similar products such as the Lelo Billy. There is the faintest of mould lines visibly running along the length of the insertable portion, but it isn’t raised at all and can’t be felt to the touch, so it won’t impact use. Reassuringly the whole toy comes as one completely sealed unit.

The Hedone has a lovely design and is very attractive to look at with its unusual shape and dusky black colour. At the far end it has a big bulbous tip measuring 11.5cm around, which sits up against the prostate. The tip is connected to a slimmer shaft of only 8cm in circumference, which is curved in order to angle the tip into the right position. The whole shaft has a completely smooth surface along the top, but on the underside is a row of five subtle bumps. At the near end of the shaft is a nub which sits against the perineum and prevents the toy from being over-inserted, thus making it completely anal-safe. Measuring from this nub down to the tip, the insertable portion comes in at 4 1/2″ which is comparable to something such as the Lelo Billy. Beyond the nub is the handle portion of the toy which takes the form of a loop through which a finger can be placed during use. On the top of the loop are the buttons to operate the toy as well as the charging charging port. In total the toy measures in at a combined length of 7 3/4″ from end to end.

The Hedone has three motors in it which is quite unusual for any toy. At the end is a big rumbly motor “A” which feels really strong and powerful, comparable to that of the Lelo Billy. In the middle is a slightly buzzy motor “B”, and in the nub near the handle is motor “C” which is very buzzy. Motor “A” targets the prostate and it can really be felt there. The vibrations are directed in precisely the right place and are intense enough to penetrate deeply into the prostate for a really satisfying and pleasurable sensation. Motor “B” is located in the part of the shaft where the sphincter rests, so this is where it stimulates and the sensations can be quite pleasant like a tickle or a tingle, but stronger. Motor “C” is intended to stimulate the perineum, but it is extremely buzzy and hard to detect any real vibrations coming from it. For the most part the Hedone is quite quiet when turned on, both inside and outside of the body. Interestingly each motor makes a different pitch of sound when it operates, so you can identify it by ear alone. While motors “A” & “B” are quiet at all intensities, when the toy is turned up to maximum motor “C” unfortunately becomes quite noisy, similar to the sound of a phone vibrating against a hard table.

The vibration function is operated by three sealed buttons on the top of the toy which are very responsive and easy to use. There is a power button which must be held down for a couple of seconds initially in order to turn the toy on, and also a “+” to increase the vibration intensity and a “-” to decrease it. The power and “-” buttons have a red light which flashes when you press them, but the “+” does not. The Hedone has 10 different vibration patterns which I will describe below, and these can be cycled through by pressing the power button repeatedly. As there are so many patterns cycling through to find your favourite one can be time consuming. One annoying fact is that as soon as you change pattern it resets the power level to zero, so then you have to crank it all the way up to maximum again. If you’re at a point where you’re really enjoying the feeling and you just want a different pattern to help push you over the edge, then having the intensity drop to zero can really spoil the moment, and you then have to try to build back up to that point again once you’ve adjusted the power. Another strange feature is that changing the power level interrupts the pattern sequence, so every time you press “+” or “-” it returns whichever pattern you’re on to the start of the sequence.

The patterns are as follows:

While there is a good variety of patterns the problem with it is that the patterns all seem to involve creating different sequences of the three motors, rather than the sort of patterns you find in a toy with only one motor. The one motor you really care the most about when using it is motor “A”, as that’s the one stimulating the prostate, motor “B” is nice but not that important, and motor “C” is almost irrelevant in that you only know it’s on as you can hear it rather than feel it. The patterns I liked most were 4,7 & 10, and I did find these enjoyable to use, but what I really would have liked would have been to feel motor “A” by itself vibrating in a series of different patterns, rather than just feeling all three motors jumping around and vibrating in a different order. It’s almost as though the designers over complicated the device. On paper it sounds really good to have 3 motors instead of just one, but in practice it makes it harder to achieve a good selection of patterns.

When it comes to using the toy the bulbous tip will make it slightly more tricky to insert for those who aren’t used to it, but lucky the velvety surface holds lube very well which aids the process. Once it’s inside it’s a very comfortable toy thanks to the flexible silicone shaft, and the tip nestles up nicely against the prostate. The only downside to the flexibility is that you can’t direct or angle the tip into the prostate more firmly in the same way as you can with the Lelo Billy, as the shaft simply bends when you apply pressure laterally. One of the best features of the Hedone has to be the loop handle as it makes it so much easier to thrust with the toy, whether you’re pulling it deeper into the body or back out again, it makes both actions easier. The other advantage of the loop is that you don’t accidentally hit the buttons while holding it.

The toy is rechargeable and only takes 2 hours to charge up to maximum. The plug for the charger is a little bit tricky to get into the toy. You must insert the end of the plug through a small hole in the silicone, and the manual says to do it “gently” but it requires some force which had me slightly worried as I didn’t want to break it. The manual says to insert it until you feel a “subtle click” but I wasn’t aware of one, you just need to push it in as deep as it will go. After that is done everything works fine; the lights around the buttons flash to indicate that it’s charging, then go constant when it’s finished.

Because of the charging port the Hedone is only splashproof  rather than waterproof, so when you’re rinsing it under the tap you want to make sure to keep any water away from that hole. The toy can be sterilised as it’s silicone, but only by wiping it down with a 10% bleach solution, as it wouldn’t be clever to attempt to boil something electronic and non-submersible.

Overall I really like the Hedone for its bulbous tip, its flexible silicone body, and its strong vibrations. These things make it a strong contender against the Lelo Billy. The downsides really are that the selection of patterns could be better, one of the motors is unnecessary and noisy, and it’s annoying having the vibration strength decrease when you switch patterns. It’s still a quality prostate massager though, and depending on how you intend to use it it could be just the thing you’re looking for.

The Odeco Hedone is available from Simply Pleasure.