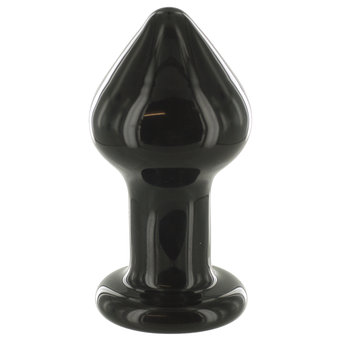 After sticking almost exclusively to silicone for so long, I felt it was high time I broadened my material horizons, and that’s where the Sasha Grey glass butt plug came in!
Read the review after the jump!

The Sasha Grey large is part of Doc Johnson’s new range of glass butt plugs. Aesthetically it’s quite a stunning piece to look at, made from an opaque black-pigmented pyrex glass. What’s unusual about the plug is its proportions; the over all length of the plug is 4 3/4″, with 4 3/8″ being insertable. Of this insertable length a significant portion is taken up by the neck, which measures in at 1 3/4″ long. The bulb itself is very short and stubby, with a sharp taper. The distance from the tip to the widest point is a mere 1 3/4″, and when you consider that the widest point has an impressive diameter of 2 3/8″, you realise that this plug is definitely only for the more advanced user.

You can buy the Sasha Grey from Lovehoney in Large, or Medium if you’d prefer.