Today I’m going to try my hand at my first ever underwear review!

The Mustang Bikini is quite a nice pair of men’s briefs.
The briefs are made from a very fine mesh, which isn’t apparent in the photos, and this creates the sheer look of the garment. As a result of this, if you have quite shortly trimmed pubic hair then it is likely to poke through the small holes in the mesh. The fabric isn’t especially soft, and does feel synthetic to the touch, but I didn’t find it uncomfortable to wear in any way. The design has a camouflage pattern on both the front and the back, made up of red, white, and black patches. Of these only the black areas are really see-through, and the other coloured sections hide ones modesty quite well, contrary to what the product image above suggests. The back portion is much more noticeably transparent than the front, with the cleft between the buttocks being the most obvious feature anyone will be able to make out. 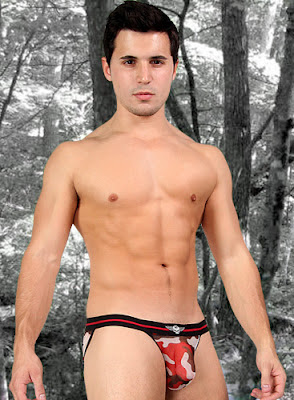 The briefs are very low cut, and quite skimpy. The pouch of material at the front helps to shape the genitals into a nice bulge, for a rather flattering appearance. There’s enough material there to accommodate any sudden increases in size which may occur within, so there’s no need to worry about bursting out of them. The lack of material around the sides helps to show off the thighs, with only the thin waistband present there, so as not to obscure things too much.
In terms of size the underwear seemed a little small, especially when compared to well known underwear brands like Emporio Armani and Calvin Klein. The fit seemed good around the bum, but the waistband was a little tight and the elastic didn’t seem that stretchy. The result is that they don’t slip on and off that readily, and the squeeze of the waistband creates the appearance of a slight “muffin top” even on someone as skinny as I am. It may be worth buying one size larger than usual, just to avoid this.
Overall it’s a fun pair of underwear, not something for everyday, but also not such a novelty that it would only be appropriate for the bedroom. If you’re feeling adventurous then you could wear them out, or just get them to surprise a partner.
Tweet
Pin