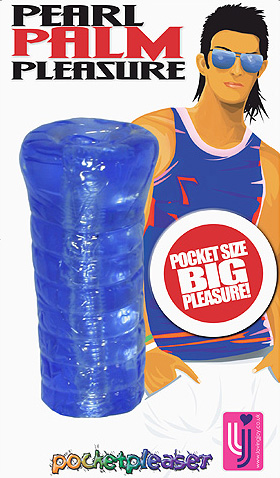 I was given the Pearl Palm Pleasure as a freebie to try out, and so far it’s the only toy I’ve sampled from the Loving Joy brand. Given the quality of it I’m somewhat reluctant to ever try any of their other wares. I wouldn’t normally want to spoil a review, but this is one toy to avoid.
Read the review after the jump!
My initial impression upon removing it from the packaging was that it was quite diminutive. It stands at 4 inches tall and is 5 inches in circumference, which interestingly as a fact makes it smaller than the statistical-average penis size in both regards.
Appearance wise it’s fairly nondescript in design. The opening seems to depict a scaled-down vulva – which may or may not appeal to you – and the exterior features some shallow ringed depressions, presumably for grip. There are a lot of unintentional creases along the surface of the plastic, which appear to be a result of the moulding technique employed, and do detract somewhat from the overall look. The material is translucent in both colours, which means you can see five small pearl-like beads embedded in the plastic, from which the toy takes its name.
The product is described on its packaging as being made from a “jelly rubber”, which I couldn’t help but notice gave off rather a strong chemical odour, something I found reminiscent of an inflatable mattress, or pool toy, etc. 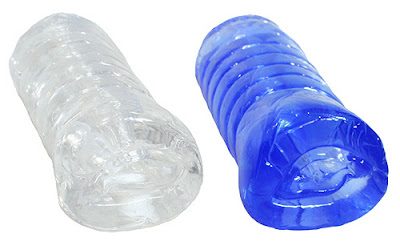 When it came to using it I found there was some difficulty; the opening is only 7mm wide, and even with liberal applications of lube it took quite a lot of pressure to force myself inside. I was actually a little surprised by how much the rubber finally stretched, and once it was on it felt O.K. There was quite a strong feeling of tightness whilst inside it, and consequently it had something of a reluctance to stay in place. I found I needed to hold it there with quite a firm hand, as the one time I did let go the whole thing shot off rather amusingly. When it came to establishing a rhythm with the toy, it failed to glide up and down the shaft very well due to how tight it was, and instead I ended up using short strokes to massage the head with it, which felt quite pleasant. The inside of the toy is very finely ribbed, which you can feel if you pop a finger in there, but I didn’t find them noticeable whilst using it on the penis, which I suspect is because they flatten out due to the expansion of the toy during use. I also didn’t notice the feeling of the “pearls” during usage, unless I really squeezed on them. They seemed to become displaced in the plastic, and formed protuberances in the surface of the product. After prolonged use of the toy I began to feel some discomfort; with the heighted sensitivity present during the approach to climax I found the tightness of the toy to be somewhat over stimulating.
With regard to the durability of the product, it didn’t last longer than a couple of uses. After the first time I noticed two splits in the rubber right at the opening, and another split inside had allowed one of the “pearls” to drop out of its place and fall into the centre of the toy. These got worse with subsequent use.
Considering the low cost the Pearl Palm wasn’t a terrible disappointment. Looking at a comparable product in this price range would be one of the cheaper Tengas, which actually advertise themselves as being designed for single use, and are constructed quite differently. I ended up throwing mine in the bin, and couldn’t in good conscience recommend that anyone else buy one, even at this price. Spending that little more on a Fleshjack is well worth it in the long run.
If you’re really curious, then you can buy one from SexToys.co.uk.
Tweet
Pin