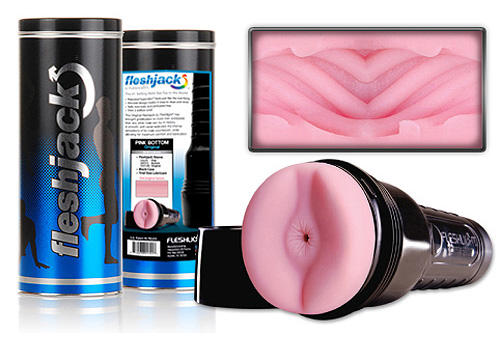 This March the generous people at SexToys.co.uk were kind enough to send me a Fleshjack Vortex to review. This is now my second Fleshjack, so it presents an excellent opportunity to contrast and compare it with the Fleshjack Ice Bottom Original. I apologise in advance for any areas of slight repetition.
There are countless combinations of FleshJacks to choose from, and as I’ve discovered, once you buy one you just want to try them all. For the purposes of this review I will be focussing on the original pink material, with the bottom opening, and the vortex internal texture.
Starting with the packaging, FleshJacks come in a nice metal tin, which can be kept and used as a place to store the item in. It helps to give the item a quality feeling, rather than just being presented inside a cardboard box.
The standard FleshJack has a black plastic case, which looks a little cheap compared to the clear case of the Ice Jack, but offers more discretion by hiding the pink insert inside. The outside of the case has some raised bands for the purpose of adding grip when using the product. The base cap of the case can be loosened or tightened to adjust the level of suction inside the toy during use. Unfortunately as there’s no rubber seal around the cap, no matter how tightly you screw it down air will always leak in, and you won’t achieve a complete vacuum, but if you are looking for a strong sucking sensation then it still delivers. The material of the insert feels wonderfully soft to the touch, and can be squeezed and stretched with ease, to the point that you’ll be eager to start using it as soon as you’ve felt it. Compared to the Ice Jack the material felt a little more robust, and less delicate, which I found reassuring. Unlike the Ice Jack you’re obviously unable to see what’s happening inside while you’re using it, but aside from a brief moment of curiosity, I found that I didn’t really miss that feature.
The bottom variant has an anal opening which is vaguely realistic in appearance. Around the small central hole the area is textured, to mimic the puckering of a real anus when closed. The detailing in this area is much less pronounced than in the Ice Jack, both visibly and to the touch. The bottom opening is the tightest, but it only lasts for the depth of about a centimetre before opening onto the inner texture. As it’s quite a narrow opening the most efficient way to apply lube to the inside of the insert is with a pump bottle or lubricant syringe. The best way to enjoy the tightness of the butt opening is to just pop the head of the penis in and out of it, as you really do feel it then, and along with the slight resistance it provides, it helps to imitate real anal sex. Because the material is so stretchy, once you’ve fully inserted yourself and are enjoying the FleshJack, you won’t really notice any extra tightness from the opening around the base of the shaft.

The vortex texture has a ridged central canal, with the raised areas following a spiral pattern down the length. Looking inside there is a visible seam running along the texture, but the material is so soft that its presence is irrelevant. Just slipping a finger inside allows you to get a feeling for the texture, and already you can tell that it’s going to be exciting. In terms of tightness, the internal diameter of the canal is narrower than the original texture where the raised ridged areas are, but it feels slightly wider in the grooves between the ridges. The result is that is pretty much balances out, and there isn’t a noticeable different in tightness between the two. The width of the canal is supposed to repeatedly shrink slightly and then expand again, down the length of it, but had I not read about it then I don’t believe I would have been aware of this. The changes are not dramatic enough to have an impact. When using the vortex it manages to simultaneously feel more stimulating than the original texture, but also less intense, which probably sounds like a confusing thing to say. Because the original texture was smooth, the whole surface of it applies equal pressure to the entire penis continually, during every thrust. This constant stimulation can be almost overwhelming, but with the vortex only the raised areas apply the most pressure, so at any one time only about 50% of the penis is experiencing the maximum amount of pressure, while the other 50% is getting some relief, so the cumulative effect is a less intense feeling. Where it feels more stimulating is that you really do notice the texture, I found certain areas of the penis were more aware of it than others, namely around the coronal ridge. Because of the slightly bumpy ride, you do experience a different sensation; the original texture would be like a straight line on a graph, with every thrust feeling uniform, whereas the vortex would have more peaks and troughs, with different areas of the penis being stimulated the most at different times. It was a really refreshing change to the original texture, which I had begun to grow bored of, and I definitely found it more enjoyable and pleasurable to use.

As the inside is textured it does mean a larger surface area, which in turn means you’ll need slightly more lube to cover it all. What lube you use is going to be a big factor in how much you enjoy it; you want to use water-based only, to protect the material, and something long lasting, to avoid the need to apply more just as you’re about to climax, or worse, thrusting when its dried up, causing both chafing to yourself and fissures inside the sleeve. The experience is supposed to feel more realistic if you first heat up the insert to body temperature. The microwave is not suitable for this, and so it is recommended that you try submerging it in hot water. In my experience the insert did not absorb much heat from the water and it wasn’t worth the bother.
With proper care, FleshJacks are manufactured to be very durable. Unlike other cheap masturbators which split and degrade over time, my FleshJacks have remained in virtually the same condition they were on the day I acquired them.
The one thing that puts me off using any FleshJack as much as I might otherwise like to is the maintenance, but I don’t wish to repeat myself too much on this point, as I covered it quite in depth in my FleshJack Ice Bottom review, and again in Zen and the Art of FleshJack Maintenance. Something that pleasantly surprised me about the pink insert, is that they don’t get as sticky at the Ice ones do, after you wash them. The Ice inserts get ridiculously sticky, it’s a virtual necessity to cover them with corn flour after they’re dry, in order to get them back into the case. With the pink insert, the surface barely became tacky after it dried, and I didn’t even bother with the corn flour. I have to say, had I known about this difference I would have bought a pink one in the first place, instead of the ice, as the convenience far outweighs anything else.
I would definitely recommend a FleshJack to anyone looking for a good quality masturbator, especially this model. It happened to be my second, but in my estimation it would also be perfect as the choice for anyone looking to invest in their first FleshJack.

Unfortunately SexToys.co.uk no longer sell the Vortex model of Fleshjack, but others are available.

The full FleshJack range products is available directly from the Fleshjack website, and they ship from locations in the US, Canada, Australia, and Spain: