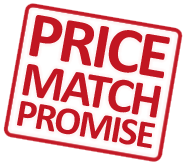 It may surprise you to know that world of sex toy retail is a highly competitive industry. With sex toys at a record level of social acceptance, and more men and women buying them than ever before, new stores are popping up every day all vying for your precious business.
Different stores will try to attract your custom in different ways. Lovehoney, for example, aren’t always the cheapest, but they more than make up for it by having the greatest returns policy in the world. You can buy something from them, use it for a whole year, and they’ll still allow you to return it for a full refund if you decide you don’t like it any more.
Other stores will try to entice you with a price guarantee; if you find an item they sell cheaper elsewhere then they promise to match this price. I used to use this service a lot when first started buying toys in 2011, and it’s especially good if you happen to have a discount code to use at the same time, thus knocking another percentage of the cost off the order.
I know a couple of stores which offer this service, and they handle it slightly differently, so I’ll talk you through both. Be sure to keep reading if you want to know how to get a great deal on some Fleshjack Boys dildos and more!

This is the first website I know of which offers a price matching service, and it’s one which I’ve used extensively in the past. They follow quite a simple procedure to obtain your price match: you go to the product page of the item you’re interested in, click on the small red price match button, then fill in a short form telling them where the item is available cheaper. Afterwards a customer service representative will get back to you, and provide a link to add the item straight to your basket at the new lower price. It’s as simple as completing the payment process after that, and you’re only ever charged the lowest amount.

SexToys.co.uk always have a lot of great offers going on, with discount codes available through their website, Facebook, and Twitter, offering up to 30% off sometimes. If you can shop around for a bit to find a lower price, then combine the price match with a discount code then you can make some fantastic savings, and it’s free shipping on even the smallest order.

This is the most recent website that I’ve carried out price matching on, and they handle things slightly differently to SexToys.co.uk. Once you’ve found a UK site which sells the item cheaper, you want to go to the product page on SexShop365 and add the item to your basket, then head straight to the checkout. At checkout, as you’re going through the payment process, you’ll see a box labelled “notes for customer services” and here you want to tell them that you are price matching, and provide the link to the website where the item is cheaper. When the order is processed they’ll beat the cheaper price by £1, and throw in a free bottle of lube as well, and of course it’s free shipping too!

What can be slightly confusing, if you’ve never used the service before, is how they process the payment. Initially they charge you the full amount of the item, as shown on their website, then they immediately refund to you the difference from the price match. It all happens very quickly, as you’ll see if you check the time codes on your bank statement, and when the order dispatches you’ll get a note on an e-mail receipt confirming the amount of the successful price match.

If you’re a big fan of Fleshjack products, like I am, then you can get a great deal by price matching the following items at SexShop365:
One of the really important things to remember about price matching is that not only are you getting a fantastic price (and free lube) but you also have the confidence and peace of mind of knowing that you’re shopping with a trustworthy and reliable store. This is one of my top reasons for doing it, beyond the ordinary savings.

I hope this has proved useful, and feel free to tell me about any of your successful price matches in the comments below!