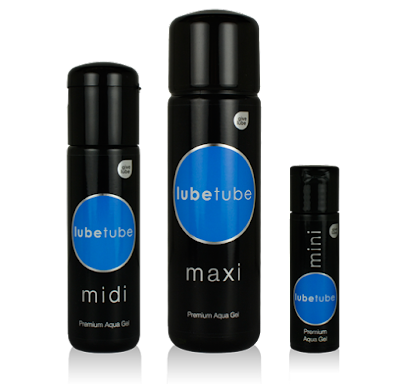 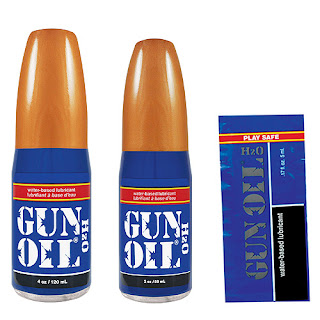 I was looking for a new water-based lube to try out recently, and being a big fan of Gun Oil’s signature silicone product I decided to grab a 5ml sachet of Gun Oil H2O last time I was ordering toys.

In terms of how slippery and long lasting it is, the Gun Oil H2O has to be the best water-based lubricant I’ve tried thus far.

Unlike a lot of water-based lubes it isn’t very viscous, instead having a thin watery consistency, which seems to add to its performance. I found it worked exceptionally in combination with a FleshJack, with one small application at the outset being all that was required. The only downside is that it’s not ideal for use with things such as butt plugs, as it doesn’t stay where you apply it, but thankfully Gun Oil produce a gel-style variant to take care of that.
As it’s water-based it’s not a problem to rinse off both yourself and your toy once you’re done, and can easily be cleaned from any fabrics it may come in contact with, without leaving a mark.
One thing I will say about the sachets, is that they’re very difficult to open. I resorted to scissors, being unable to tear into it, so if you were looking for a sachet to pop alongside the condom in your wallet, just in case of impromptu sex, then I’d bear that in mind. There’s nothing like prolonged fumbling to kill the mood, after all.

U.K. readers can buy Gun Oil H2O from SexToys.co.uk, Nice ‘n’ Naughty, or Esmale where you can get an extra 10% off by using the code ‘INCEND10’ at the checkout.

This silicone lube is Gun Oil’s original and signature product. The story goes that during Operation Desert Storm in the early 90s, U.S. marines would take the oil from their guns and use it to masturbate, as it was the only lubricant that wouldn’t break down in the scorching heat of the Persian Gulf. From there a commercial idea emerged, and Gun Oil® was born.
Read the review after the jump!
Gun Oil Silicone is a lubricant primarily designed for use during masturbation, as silicone lubes can have an adverse effect on many types of sex toys, including silicone toys and FleshJack inserts. It is completely condom-safe though, and so can be used during sex.
The lube has quite a thin runny consistency, and a greasy feeling to it which is quite different to water-based products. I found that a couple of pumps of it were more than enough, as a small quantity easily spread over a wider area. The lube is very slippery and long lasting, as unlike water-based lubes it won’t dry out through the moisture content evaporating or being absorbed by the skin. Depending on how long you intend to draw out your personal play time, typically you won’t need more than one reapplication in my experience.
As someone who generally doesn’t use lube for masturbation I found that this product provided a nice change of pace, and encouraged an experimentation with different techniques, all which resulted in a very enjoyable experience.
After use it can be a bit troublesome to clean up, as you do need to use soap and water everywhere it’s come in contact with, to fully remove all the residue. It does leave the skin with a pleasant moisturised feeling though, probably due in part to the vitamin E and aloe vera in the ingredients.
It is quite expensive considering the small size of the bottles, but when you factor in how little you’re going to use on each occasion, it works out to be more reasonable.

Gun Oil is available from SexToys.co.uk, Nice ‘n’ Naughty, and Esmale – where you can get an extra 10% off by entering the code ‘INCEND10’ at the checkout.