Not to spoil the review or anything but I’ve been a little bit obsessed by the Manta ever since I got it, and I can’t wait to share the details with you.
Last year as I was browsing through social media a new Instagram story from Fun Factory popped onto my screen, and that’s where I saw it, this thing…
I honestly didn’t know what to make of it, it was like some sort of claw, or the hand of a Lego man, and its edges were flapping about as it vibrated in the video.
Whatever it was I knew I wanted it, and I duly went off to investigate. It turned out that it was none other than a new toy designed especially for men, and I was instantly sold.
Fun Factory are the company behind the first ever male vibrator, the Cobra Libre. I reviewed this back in 2013, and then the updated version in 2014. Since then the male sex toy market has taken an exciting turn, with the release of four iterations of the Pulse by Hot Octopuss, two new men’s vibrators from Satisfyer, and most recently the new Jett.
As someone who loves toys that vibrate this really is a great time to have a penis, and I’m especially excited to see Fun Factory getting back in the game now with the Manta, but what exactly is the Manta?
The Manta is an all new product which completely changes the way we think about male vibrators. Traditionally vibrators for men have all taken on a similar form – as in the case of those I listed above – and that’s of a reasonably large device designed to be held in the hand, and which you simply put your penis into and allow the toy to do all the work.
The Manta flips that whole notion on its head, and the design for it actually appears to be built around Fun Factory’s existing range of vibrators which are traditionally marketed at women. Instead of having that boxy little machine with a gaping maw at one end, the Manta has the long elegant shaft of a traditional vibrator, complete with the ergonomic finger loop in the handle, only rather than coming to a point at the tip the shaft divides like a pincer creating this opening for the penis.
For me it’s a completely novel design idea, though you can recognise hints of other products in it from which they must have drawn inspiration. More interestingly is how it actually works.
The Manta has a solid body covered by a layer of soft velvety matte silicone, which comes available in a choice of either blue or green. The body stops about 2cm away from the opening in the “claw” meaning that the entire end portion of the toy is made entirely from silicone. This is surprising because it actually puts the motor a way back from the surface of the toy that will be making contact with the penis, but this has no detrimental effect whatsoever. 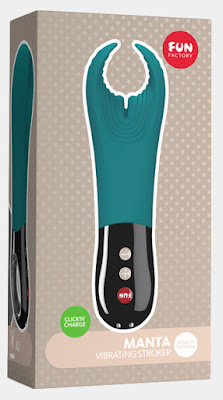 What’s actually wonderful about the Manta is what a versatile toy it really is. When you first turn on the power the thing you’ll immediately notice is motion blur from the tips of the pincers. The strength of the vibrations, transmitted superbly through all that silicone, causes the tips to flutter back and forth before your eyes, and this brings us to the first way to use the Manta.
Placing the tips of the pincers either side of your frenulum feels divine. This is the area often referred to as the “male G-spot” and is the prime region for vibrator usage. It reminds me of the same reason I liked the Jimmyjane Form 2 so much, because of those two points of stimulation. The actual strength felt from the vibrations when the Manta is used like this is incredible. You might expect the tips to stop fluttering about as soon as they come into contact with something, but they really don’t, they just transmit those vibrations straight into the body. You can vary between a very light touch, and feel more of the physical sensation of the tips tapping against the skin, or you can push it more firmly against the penis and get a more traditional vibrator experience. Either way feels great, and you get a strong rich vibration sensation.
The next way to use the Manta is to actually insert your penis into the “claw.” Because the pincers are so soft and flexible, and made entirely of silicone, they can easily expand to accommodate any sized penis. This is aided by the fact that small crevasse goes down from the interior of the claw about 1 cm into the silicone portion just before the solid body. The interior of the claw is lined with subtle ridges which remind me of the folds on the underside of a blue whale. The best way is to line the frenulum up with the crevasse, so as to place it directly opposite the motor. When it’s turned on in this position you do feel more of that strong vibrator force up against the frenulum, but also the pincers continue to vibrate and provide sensation all around the rim of the head. It’s perfectly possible to use the Manta like this in a stationary position, just playing around with the controls to alter the sensations, and that’s actually one of my favourite things to do as it feels fantastic.
The other way to use the Manta whilst your penis is inside it is as a stroker. For this you will require a little water based lube, making it the most messy of the options. Precisely how you go about this will all depend on your foreskin situation. If you’re uncut then I found that the best thing to do is to hold the foreskin back with one hand and gently slide the Manta up and down the shaft with the other. This provides a nice combination of a physical stroking action with wonderful vibrations from the Manta. If you don’t hold the skin back and you don’t use a lot of lube then the Manta can be used just to slide your foreskin up and down your penis like a regular masturbation motion, which felt good but ultimately less satisfying. If you happen to be a circumcised man then using the Manta as a stroker should be the most straightforward way of all.
What I found that I enjoyed most was to vary between the methods, to start off with the tips of the pincers against the frenulum, then to move my penis inside the claw, then to go back to using the tips. It’s incredibly fun to play around with, especially if you enjoy edging. You can even pop the Manta around the base of your shaft and jerk off normally, but with that feeling of vibrations surging through your entire penis.
The vibrations themselves are strong, and they’re good and rumbly. They’re not as rumbly as the sheer powerhouse that is the Pulse III, but they’re excellent nonetheless. Not only do they feel amazing, but there was never any difficulty in getting off from them, and there was a guaranteed orgasm every single time, and a great orgasm at that. There are six different power levels to choose from, steadily getting more intense, and often I found that I didn’t even need the higher ones. The lower levels are great for edging because you can tease yourself and really draw things out. They also happen to be the ones which have a more rumbly flavour to them.
In addition to the power levels there are six vibration patterns which you can cycle through, and I love these. They feature all your favourites; pulses at varying speeds, ramp up and ramp down, etc. A lot of the fun can be had by just sitting around and picking a pattern to use, especially if you’re playing with the Manta whilst watching porn, and then you can switch it over to the next one to keep things interesting. 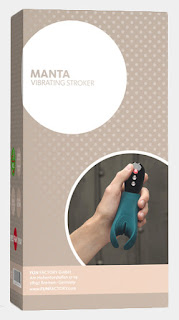 Operating the Manta is incredibly easy; it has three buttons, the red “Fun” button which turns the device on and off, and a (+) and (-) button to cycle through the power levels and patterns. The handle itself is very ergonomic, and the inclusion of a finger loop through the end should aid anyone who struggles to grip things.

One of my favourite things about the Manta is just how quiet it is. A lot of male vibrators have a reputation for being noisy, but the Manta makes no more sound than any regular high-end luxury vibrator, and the sound is especially soft at the lower power levels. You can happily use it with no fear that anyone outside your door, or on the other side of a thin partition wall, will be able to hear it.
The Manta is a fully rechargeable toy, and comes equipped with one of Fun Factory’s signature magnetic USB charging cables, making it very easy to keep powered up and ready. Unlike some products Fun Factory use really strong magnets so the charger will stay in place and not drop off accidentally.
The Manta is also a waterproof toy, so you can easily rinse it under the tap to clean off any lube and bodily fluids after use, or take it with you into the shower for some fun there.
I have to say I really really really love the Manta. I must have used it nearly every day since I first got it, and I was almost afraid to review it in case I didn’t do it justice. It’s honestly hands down my favourite men’s toy of all time. Not only is it beautifully designed and incredibly well made, but it’s so versatile and delivers those strong rumbly vibrations which feel phenomenal, and lead to an amazing orgasm every single time.
I really can’t recommend the Manta strongly enough, whether you want to get one for solo use or to use on a (very lucky) partner.
Thanks so much to Fun Factory for sending me this fantastic toy.
It’s available right now from CloneZone, Harmony, SheVibe, and  Lovehoney UK / Lovehoney US / Lovehoney AU
Tweet
Pin