Back towards the end of October I was in London visiting a friend, and after a nice dinner in Soho we decided to pop into CloneZone for a mooch around before heading down to Heaven to watch Monet Xchange.
This is where I first encountered Mr Hankey’s Toys. It’s unusual for me to discover a new brand these days, but there stood a whole cabinet of these wonderful looking silicone creations, and one immediately took my eye – The Rentman.
When I got home I immediately looked them up, and decided that I’d pop them an e-mail and see if they’d be open to sending me a Rentman to review. As it turned out they got back to me and instead generously offered 3 products of my choice, and now is the time to finally tell you all about these incredible toys, starting with the Taintacle. 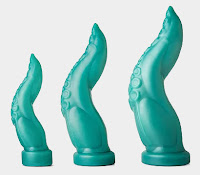 The Taintacle comes in three sizes, Small, LG/XL, and XXL. I opted for the Small, because one thing you quickly learn about Hankey’s Toys is that their baseline is pretty big, and things only go up from there. The Small measures 8 1/2″ from base to tip, with 8″ insertable, though I should stress that I’m taking a straight measurement here, and it’s an inch more if you follow all the curves of the shaft with a tape measure. In terms of circumference it’s 7 1/4″ around the widest point near the base, 6″ right in the middle, and the tip tapers away to almost nothing, but it’s 4 1/4″ just before the first bend.
The design of the Taintacle is pure tentacle through and through. It has this wonderful wavy shaft that curves back and forth in a slightly flattened S-shape, giving the real look of a sea creature reaching out with one of its arms. On one side it has a double row of raised suction cups which runs two thirds of the way down the shaft, and then at the base and up the opposite side it has some fascinating detailing that looks like tensed muscles. The tapering of the Taintacle is wonderfully gentle, so it naturally increases from its slender tip all the way down to the chunky base.

The Taintacle is made from 100% platinum silicone, and comes in a choice of two firmnesses – Medium Firm and 75% Soft. I opted for the 75% Soft and it’s so gloriously squishy – I loved the feel of it in my hand even before it went anywhere near my butt. Not only that but the surface of the silicone is incredibly smooth and glossy, with not a seam in sight.
One of my favourite things about the look of the Taintacle is the colour, this amazing pearlescent seafoam green which really catches the light. It’s the perfect colour for it, and the natural choice, but there’s also the option to order one in Black, Brown, or Tan if you desire, though these options seem infinitely less appealing to my mind.
In terms of use the Taintacle is lovely and easy to insert thanks to the gentle taper of its pointed tip, but due to the angle of it and the softness of the silicone you will need to initially guide it in with a hand, rather than just sitting on it.
As you go down the dildo you feel it steadily stretching you out, but its also a really unique sensation. The shape, the smoothness, the softness of the shaft, everything so slick with lube, it really feels quite alien, like the appendage of a cephalopod winding its way and probing into your insides. Frankly I love it for that; if you ever imagined a tentacle being forced up your butt, this is exactly what you would expect it to feel like.

The insertion is something of a story of two halves. There’s the first section, and then there’s the point where the shaft bends suddenly in the opposite direction. This I found complicates things, because not only does it get much thicker at this point, but when you’ve lined up your body perfectly with the direction of the initial bend it can be confusing where to go next. Should you keep going, should you do a 180 with the dildo while it’s still inside you?
I found that both options worked well to some extent, though you must be careful as despite being so soft the pointed tip can still poke you uncomfortably in places, and almost feel as though it’s snagging on the rectal lining. By wiggling it around while bearing my weight down on it I was finally able to insert it fully, and oh did it feel good. The stretch and the fullness of that final section, with all its girth and squishiness was well worth the effort. The interesting thing is that because the toy is so soft, even with all your weight on it it sometimes doesn’t go any further, because the silicone merely compresses, so you have to have patience and coax it along a little.
You don’t actually have to insert the Taintacle all the way to enjoy it though, thrusting with the upper two thirds of it puts it in a position where the raised suction cups will rub against your prostate and this is a truly lovely feeling.  Thrusting is one of the real pleasures of this toy because it combines so many sensations: the unusual feeling of this alien object probing you, its soft fleshy mass rubbing your prostate in the process, and not to forget that stretch. It’s honestly enough to turn anyone into a tentacle convert. It’s not the most targeted prostate toy in the way that some dildos are, but I could honestly enjoy the feeling of that big bulging bend massaging my prostate with its texture for a good part of the afternoon. If you had a sex machine to use it with then that could be honestly amazing.
I have to say that I am a huge fan of the Taintacle, and if you’re looking for a toy that’s a little bit different, then I can’t recommend this one enough. It even looks great as an ornament in the bathroom. I really am incredibly impressed with my first experience with this brand; the toys are beautiful and made to exceptional standards. Many thanks to Hankey’s Toys for sending the Taintacle to me, and you can buy it right now from CloneZone in the UK, or directly from their website if you’re anywhere else in the world!
Tweet
Pin