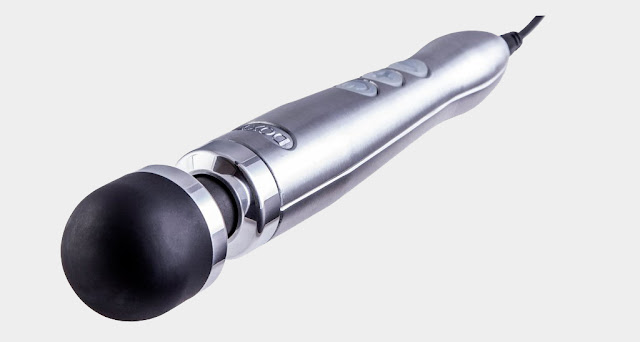 A few years ago a new company popped up in the South West of England, offering what was to be a rival to the famous Hitachi Magic Wand, and that company was Doxy. By any measure the Doxy Wand immediately took the Internet by storm, with every blogger raving about it, cam performers adding it to the top of their wishlists, and eventually that success spawned the all-metal Doxy Die Cast, and the innovative Doxy Don (formerly Skittle) – which I had the pleasure of reviewing back in 2015.
Late last year Doxy revealed the third in their line of vibrating wands, the aptly-named Doxy Number 3, an all-metal bodied wand in the vein of the Doxy Die Cast, but in a new compact shape, and I knew that it was finally time for me to try one out.
A couple of e-mails later and Doxy have very kindly sent me a Number 3, and today I’m finally going to review it!
I’m not a complete stranger to vibrating wands, having reviewed the Palm Power way back in 2013, but it’s safe to say that they’re a category of toy of which I own the fewest pieces. I am, however, completely taken in by the sheer power that can be delivered by something running on mains power, and that’s why I was so excited to try a Doxy.
The Doxy No.3 is a serious piece of kit; it has a 7 1/2″ solid brushed-aluminium body, topped with a shiny metal collar, giving it a feeling of real clout whilst retaining a sleek and attractive appearance. It’s capped with a solid metal head, largely covered in a velvety-soft matte black silicone, but with a band of shiny metal left exposed at the bottom to mirror the collar of the shaft. In all it comes in at a total length of just over 10″, with a circumference around the head of 5 3/4″, and a total weight of around 340g. It may be the compact model, but it still has plenty of substance to it.

The Doxy is powered by mains electricity, and has a generous 3m cord which allows it to reach even the most awkwardly-placed socket in a bedroom. It also features one of those handy plugs with the interchangeable prongs, so they can be swapped out and replaced depending on which locale you’ll be using the toy. The package does only contain the correct prongs for the region you buy it in however, so if you want to take it travelling you’ll have to make your own arrangements there.
The Doxy is operated by three buttons located slightly below the mid point of the body. There’s an on/off button, a (+) to increase the power, and a (-) to lower it again. As well as a constant vibration mode, a pulsating mode can also be accessed by holding the power button down for a couple of seconds whilst it’s turned off. For me the button placement is quite convenient, whether you be holding the wand with your thumb pointed towards the head, or with it flipped 180 degrees and your thumb pointed towards the cord. One nice feature is that the buttons light up when the toy is turned on, so they’re a little easier to locate if you’re using the wand in dim ambient lighting.
The wand itself packs a serious amount of power. Even on the lowest setting you can feel that sheer force as it turns on, and from there you have several other levels to move up into. One thing which did surprise me a little is that the No.3 isn’t all that rumbly. It’s definitely more a middling sort of vibration on the buzzy to rumbly scale. I can’t really comment on how this compares to previous Doxys, and if it’s merely a consequence of downsizing the wand, but I was expecting a deeper vibration. As with many toys I found that the lowest power setting had the most rumbly quality to it, compared to the higher ones.
In terms of use the Doxy really is a joy. You can start off in a very teasing fashion, just running it over the outside of the underwear, and already those vibrations start to have an effect and rouse what sleeps within. Moving it all around the genitals, and along the perineum, can continue to produce an effect without any direct contact with the erogenous zones, just allowing the vibrations in the surrounding areas to filter through. Using it straight against the penis is where it really shines though, running it up and down the length of the shaft, slowly encircling the head, and most importantly held up against the frenulum, or stroking it. With the Doxy pressed against the frenulum you could easily achieve climax in mere seconds if you really wanted to, such is the strength of it, but ultimately most will find greater pleasure in drawing the experience out. This is also where the pulsing mode comes into play, because this is absolutely my favourite way to use the No.3. With the Doxy pressed up against the frenulum, and pulse mode activated, the rhythm of vibrations into the penis feels fantastic, and further more you can adjust the interval between each pulse using the buttons, allowing you to ramp up the speed as you approach climax, for even better effect. Interestingly the Doxy does have more of a rumbly quality to it in this mode, as each time it stops and starts in between a moment of ramping vibration strength, it gives off a judder which can be felt deeper into the tissue.
Another way I found that it’s quite nice to use the Doxy is around the anus. Just gently pushing it up against the external muscle makes the entire thing quiver and tingle, and feels quite lovely. It almost makes you wish there was a way to use it internally, and as luck would have it I’ve seen photos of a prototype cap for the No.3 by Nexus, which would turn the Doxy into a prostate massager, and frankly I love that idea. 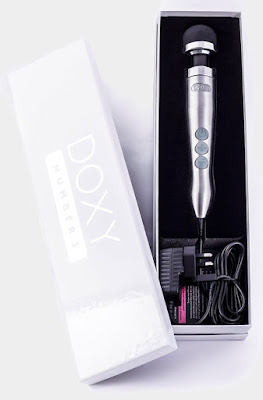 The Doxy can of course be used for non-sexual purposes, merely as an all-purpose massager. Pressing it into various areas of the body, especially around the back and neck, does feel quite soothing and therapeutic, so I’d definitely recommend trying it.
One thing people may be concerned with is the weight of the Number 3, due to the all metal body, as I have heard stories of people’s arms growing tired whilst using the Die Cast. I have to say though that I never experienced any problems, and found the Doxy quite comfortable to use the entire time.
With regard to noise, the Doxy is louder than many other vibrators; something which naturally comes with being a mains powered toy, but the volume of it is acceptable. In my experience it can be heard faintly on the other side of standard modern bedroom door, but not through a thin partition wall, especially if there’s furniture up against it, so I wouldn’t be too concerned about using it if you’re sharing your accommodation.
I have to say, on the whole I do really like the Doxy Number 3. The only slight drawback for me is that it’s not more rumbly, as those are the vibrations I crave more than any other. The Doxy does an absolutely fantastic job though, and has many uses, and has delivered many great orgasms in the process of testing it. I would have no hesitation is recommending it to any of my readers.
Thanks so much to Doxy for sending me one to review, the Number 3 is available from: Lovehoney UK, Lovehoney EU, Lovehoney US, Lovehoney Australia, SexToys.co.uk, and SheVibe
Tweet
Pin