March is upon us, the days are getting longer, and Spring feels as though it could be right around the corner, well except for one little hitch… The entire UK is currently under a blanket of freak snow, so let’s grab a cup of hot chocolate and dive right into a new review.
I’m going to kick off the month with something a little bit different, in the form of the ElectraStim Jack Socket. This is something that I’ve been interested in reviewing for a while, but somehow never got around to trying one until this past month, so let’s go and seen how it checks out!
The ElectraStim Jack Socket is, to my knowledge, the first ever masturbator which incorporates electrosex technology, and frankly I find that a little bit exciting.
I’ve been a big fan of electrosex ever since the folks over at ElectraStim first sent me some of their toys back in 2014, and I’ve been merrily zapping away at my prostate, perineum, and even inside my penis, ever since. It is one of those unique sensations that you really have to experience for yourself, and I’ve been keen to recommend it to anyone who asks.
The idea of a Fleshjack-style toy which delivers electro-stimulation as you use it just seemed too good to pass up, and piqued my curiosity as to how it would compare with the insertable toys I’d used in the past.
The Jack Socket comes in two separate sizes, a Standard, and an XL for the larger gentleman, and ElectraStim kindly provided me with both. I really wanted to compare the two versions, because despite some very detailed measurements which they provide on their website, it can be hard to judge what you’re going to be best suited for, especially if you feel you might fall between the two.
The thing about men is, we don’t know the size of our own dicks. I know that that sounds ludicrous at first, after all what guy hasn’t measured himself at some point? There’s a difference, however, between knowing a number and having a concrete understanding of the physical space which something takes up. That’s what we tend to lack, and more often than not we underestimate. Anyone who’s been on the receiving end of an over-eager guy with a large endowment will appreciate this fact. Sometimes there’s a lack of consideration of what it’ll take to accommodate something that size, and that’s why I felt it important to make sure that people would have the necessary information to obtain the best fit. 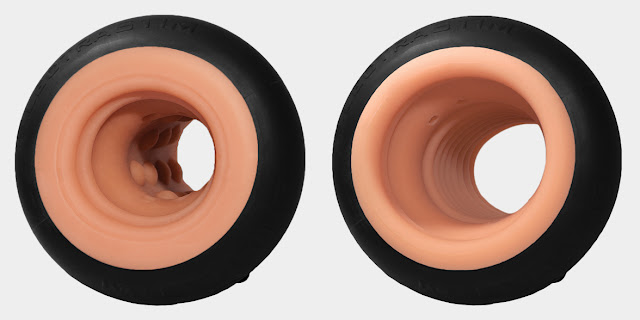 From my perspective, having a girth of 5.5 inches, I found that I preferred the Standard sleeve. It gives a pleasant amount of snugness, but without feeling overly tight, and I’m a big fan of the nobbly texture. With the XL it was still useable, but I found it less enjoyable. There’s a sensation of looseness that comes with it, which invites you to squeeze the shell to make it tighter. The texture I was also less keen on; it felt less subtle and nuanced than the nubs, and had a firmness to its feel. Based on the texture alone I’d recommend the Standard to anyone trying to choose between the two, but purely taking into account matters of size, I’d have to say that the Standard is the more versatile model. If you’re going to go for the XL then I’d suggest having a girth of at least 6”, otherwise the Standard is still going to be able to comfortably accommodate you. 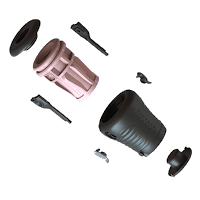 So now that the questions about size are covered, how does the Jack Socket actually work in practice? Inside the silicone shell of the Jack Socket are two lengths of conductive silicone, the type found inside the Sirius Noir, and these transmit the current up from the base of the device towards the top of the sleeve. You simply plug one end of a cable from your ElectraStim machine into each side to hook it up, and conveniently it’ll work with whichever brand of power unit you happen to already own. To get the current from the silicone and into interior of the sleeve each sleeve has 4 small holes on each side, which line up with a port on the outside of the silicone shell, and into here you squirt a generous amount of the conductive gel which is provided.
Once you lube yourself up and begin slowly inserting yourself into the Jack Socket – as you would with any other masturbator – the conductive gel oozes out of the holes, mixes with the water-based lube, and you begin to feel that electrical tickle on either side of your penis. It’s a slightly different sort of tickle to what you get from using the adhesive pads on your skin, or an insertable toy. It’s very much a surface tingle, and not that almost-vibrating sensation of the electricity passing deep into the body, but it definitely feels good. Because the gel ports are near the opening of the Socket, and the texture doesn’t begin until the second half of the sleeve, you experience a sequence of sensations during use, rather than everything at once. You get that wave of energised electrical tingling over the head of your penis, followed by the physical sensation of the bumps from the texture, and then a repeat. 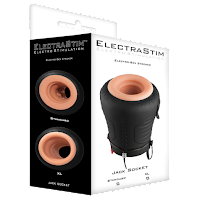 The device isn’t all that long, at only 4”, so you don’t get an especially deep stroke, but there’s a great focus on the head as you go back and forth between the two sensations, swiftly alternating between feeling one and the other, and always wanting more. This is a big part of why it actually works, because the rhythm feels a world of difference away from just holding the Jack Socket still to feel the electricity alone. If you think about how some Fleshjacks incorporate a variety of different textures throughout their length, to vary your experience as you pass through, the Jack Socket is like this, but instead it’s a multi-sensory experience, replacing a texture instead with electricity. It’s really enjoyable and a great twist on the usual masturbator experience. If you want to vary things up a little you can also adjust the orientation that you’re holding the toy in, to differently direct the flow of current. If you have the flow going horizontally then it’s a bit like two bolts going into either side of Frankenstein’s neck, and you feel the sensation most around the corona of the glans. If you position it vertically then the flow passes straight through the top of the head and the frenulum, like an electrical apadravya. It’s quite a different sensation, and it’s fun to alternate during use just by twisting your hand as you stroke. One thing I found is that the Jack Socket works best on the lower power settings. With most other electro toys I can generally keep increasing the power over time until I’m up to the max, but with the Jack Socket it tends to develop an unshakeable prickly feeling once you go too high. This can be fun in its own right, if you enjoy a little brush with pain, but most of the time you’ll want to keep an eye on it.
Just considering the TPE sleeve by itself, it’s worth nothing that it’s not as soft or as lifelike as the proprietary material they use in Fleshjacks, but it does have the bonus of being more durable, and most of the time you won’t really notice when you’re busy with it, especially if you have the nubbed sleeve rather than the ridged. It’s also nice and easy to pop out and clean after use, and it dries quickly too.
I have to say I really do like the Jack Socket. Adding the tingly sensation of electricity to a masturbator makes for a really unique experience, and there’s definitely something to be said for having an orgasm while a current is flowing through your genitals. One thing which is actually quite fun is pairing it with any other ElectraStim toys you might have, to magnify the effect. An adhesive pad on the perineum, and an Electraloop around the base of the shaft, really complement the experience of using the Jack Socket, giving you electrical sensations throughout the whole penis.
If you’re a guy and you enjoy masturbators, and you enjoy electro-play, then I really recommend checking out the Jack Socket. Many thanks to ElectraStim for sending me one.

The Jack Socket is available from CloneZone, Lovehoney, and Tantus.