Everyone’s favourite butt plug, the Ryder, has undergone another facelift recently, and so it’s time for me to update my review!

Head below to get the low-down.
The Ryder has long been considered something of a toy-box staple by reviewers far and wide, and in truth any time a product holds that sort of acclaim it’s always a bold risk to go tinkering with the design. In the case of Tantus this is a risk they’ve already taken once before, when they debuted a new thicker base a few years back. That was the Ryder I first became acquainted with, and this time around its once again the base that’s been the primary subject of the re-engineering. What makes a great toy truly great is often down to more than just the sum of its parts, so having missed out on the original Ryder I’m quite curious to find out just how much of an impact a new base will have this time, for better or worse.
I’ve always said that the Ryder is a fairly nondescript toy, and I think that still holds true even in its third iteration. There’s really nothing bold or flashy about it that leaps out at you or captivates your interest, and this is probably why it was a while before I ever acquired my first one. I’ve always found myself most drawn to toys with a little more flare and pizazz, and some unusual design element that commands your attention, but actually it’s the simplicity of the Ryder that’s the key to why it works.
The Ryder in essence is a capsule, a long ellipsoid gently curved at both ends, like an oversized health supplement. It’s not the most glamorous description, but what I do like is how the new base manages to inject a little more energy and personality into an otherwise plain plug. There’s an inescapable perkiness to how the edges of the anchor shape curl up like the corners of a mischievous smirk, or extend out pointedly like the horns of a playful devil. In fact it’s quite the contrast to how the base of the old Ryder looked like an orthopaedic shoe, and immediately gives it more shelf appeal. 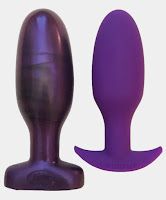 In terms of size the Ryder is quite a bit smaller than the previous model – almost 33% – and this really took me by surprise, so in the name of being thorough I went off to do a little investigating. From what I was able to find out it would seem that in fact the very first model of the Ryder was also smaller than my old version, which only raised further questions. Theoretically it could be that Tantus simply decided revert to the original size, and the second iteration was a mere anomaly, but it’s an interesting point to note for anyone who owns a 1st or 2nd generation Ryder, and is considering an upgrade. The new plug measures 4.5″ in total length, with 4″ insertable, and it has a circumference of 4 3/4″ around the widest point. Compare this with my old version which is 5″ long, 4 1/4″ insertable, and 5 1/4″ in circumference, and you can see it’s a not-insignificant difference. If you want to get into real nerd territory then the new plug weighs 86g (3oz), versus the old plug which is 128g (4.5oz). On the whole it’s still a pretty middle-of-the-road configuration that should appeal to a broad cross-section of people, though complete novices may prefer something with a little less girth and more taper.

One interesting change to the design of the Ryder is in its finish. It’s still made from Tantus’s wonderful body-safe silicone, but now instead of having a shiny high-gloss surface it features a velvety-soft satin texture. This puts it more in line with other plugs in the Tantus range, such as the Twist, the A-Bomb, the Perfect Plugs, and even the Prostate Play. Generally I prefer a shiny toy for anything you thrust with, but for plugs satin is absolutely fine, and helps hold onto lube a little better.

When it comes to using the plug The Ryder is a complete joy, and I’m going to go ahead and say that you probably won’t need a warm up toy if you’ve had experience with other butt plugs and/or dildos before. Because it’s that bit smaller, and the tip has slightly more of a taper to it, it shouldn’t be that much of a challenge to beginners either. That isn’t something I could have said about the older model which was much thicker and blunter near the tip. The matte surface of the silicone slides easily through the muscle, with no significant difference in sensation to the shiny version, and the small amount of give in the surface ensures a comfortable experience if you decide to pause along the way and give a little clench.
Once the tip of the plug has crossed that threshold then it’s pretty much smooth sailing from there out, and it gently glides the rest of the way in. There’s no real sense of a “pop” as the bulb becomes completely enveloped, and instead the sphincter just swallows up the narrow neck and comes to rest against the base. One interesting thing to note about the neck is that it’s again smaller on the new plug than the old, being half an inch less in circumference, and actually a 1/4″ less than the comparable Twist. It’s a decent size because it’s narrow enough to allow the sphincter to relax somewhat around it and not feel constantly stretched open, and it’s long enough to have room for the entire sphincter to sit in contact with it and away from the underside of the bulb.
The Ryder feels incredibly comfortable whilst being worn, and that was the first thing that I really noticed. The capsule shape is pleasantly filling but without being too much, so you’re aware that something is there, but it’s not constantly grabbing your attention with strong sensations. It’s definitely more subtle than the previous Ryder, so it’s a bit of a trade-off. After swapping them back and forth a few times I could easily tell the difference, and on occasions I would find myself missing that extra girth, but overall the new Ryder felt a little more natural inside the body, and I appreciated the extra comfort that came with that. For me one downside of the new design is that it feels slightly less secure in the body than the old one. Because the bulb of the plug is smaller there’s simply less there to hold it in place behind the sphincter, and at times you can feel the neck moving around. It can be a little disconcerting at first, but despite that I don’t think it would slip out by accident in the course of general use. During a full day of wear I had no issues to report on, but I probably wouldn’t trust it if I’d previously used a significantly larger toy, as the muscles would just be too relaxed.
One of my absolute favourite features of the plug is the new base, because it’s now so slimline, discreet, and comfortable to wear. It features the aforementioned anchor-style design, and what I love most is how well it conforms to the shape of the body, and how it feels because of it. It nestles perfectly between the buttocks and feels completely unobtrusive. When you’re stood up you can’t even see any hint of the base, meaning you can wear it under clothing without it being noticed, and it allows free movement when walking around, as though nothing was there. You’re even able to sit down while wearing the plug, including on some completely hard surfaces, and this was problematic with the old style base due to its sheer thickness. It’s ideal for long term wear, whether you want to use it all day, sleep with it in, wear it during sex, you name it. This is one design change that I can fully get behind.
I have to say I’m really impressed by the upgrades to the Ryder, and would consider this to be the definitive version now. It’s a great plug if you’re looking for something straightforward and no frills, and it definitely is a key piece for every toy drawer. Sometimes you just want a plug that’s going to be a plug, and offer that nice sensation of having something moderately sized filling you up, and this does just that, and extremely well. It’s not the right product if you want lots of texture, prostate stimulation, or to feel overly filled, but it’s a fantastic place to start with a butt plug collection, and a toy that you’ll keep coming back to because of its comfort and quality. One thing I would love to see is Tantus make an XL version that brings back the old size combined with the new base, just because I always love the option of something a little bigger.

Thanks to Tantus for sending over the new Ryder. I’d happily recommend it, and you can grab one directly from them.

Now available from CloneZone in the UK!