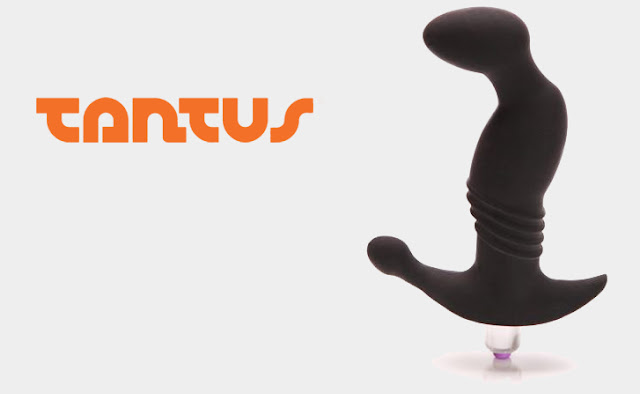 A couple of years ago back in early 2015 an unexpected parcel arrived at my door from my lovely friends at Tantus, containing none other than what was then their brand-new Prostate Play, and I’ll admit that initially I was a little sceptical about it. You may be aware that in the past I haven’t had a great deal of luck with this type of toy, and naturally that has clouded my opinion of them.

When I did eventually get around to trying out the Prostate Play I was actually pleasantly surprised by what I felt, but I still didn’t quite know how to go about reviewing it, and so I set it aside waiting for the right time.

Today, while I’m still on a roll with reviewing, I’ve decided that I’m finally ready to tackle this one, so head below for more!
The Prostate Play is, as far as I can recall, Tantus’s first attempt at making a vibrating prostate massager, and as someone who loves this company I was really curious to see what twist they’d put on it. In my experience with Tantus they’re not an organisation that ever goes at things half-arsed, or is content to follow, so if they made this then it had to be because they were convinced they could do something better.

The shape and design of the Prostate Play is quite similar to what you’d typically associate with most prostate massagers on the market. It has that vague T-shape to it, with a lumpy shaft, and at the bottom it has Tantus’s anchor base, modified with the addition of a small nodule to apply pressure to the perineum. The only significant difference in the design is that the section at the very top of the shaft is more pronounced. It curls sharply forwards like the stinger on a scorpion’s tail, poised ready to strike. You can immediately sense that this is the portion of the toy that’s going to have the biggest impact during use.

The toy itself is made from possibly one of the firmest formulations of Tantus silicone that I’ve encountered, and that tells you something about how it will function. There’s not a whole lot of squish to it at all, and the only parts that remain significantly flexible are the wings of the base, so you know its going to retain its shape inside you. One other subtle feature to the design is the presence of three raised ribs around the neck of the toy, which presumably are intended to create a little more grip and prevent slippage whilst worn.
Inserting the Prostate Play is pretty simple and straight forward, and you don’t need to be an expert in anal play to do it either, as the thickest section measures only 4″ around. The exterior has a velvety-soft matte finish, which not only feels pleasant against the skin, but which clings onto lube nicely as it slides smoothly into the body. The toy pops into place easily, and immediately you do notice a firm pressure emanating from inside, undoubtedly from that hooked tip. At first it does almost border on discomfort due its unfamiliarity, but then as you become used to it this subsides. It’s hard to pinpoint exactly where the pressure is coming from, and at times I was wondering if the 4 1/2″ shaft was overshooting my prostate slightly and instead hitting the bottom of my bladder, but it didn’t particularly produce an urge to pee, leaving things inconclusive.
The Prostate Play comes packaged with an RO-80mm style vibrator, and the first thing you should probably do is throw that away. Ok, so I know that sounds a bit harsh, but I really don’t have a lot of time for these buzzy little battery-powered bullets any more. The real centrepiece of the Prostate Play is the silicone sleeve, and while it’s nice that Tantus includes the bullet, if you’re going to want it to vibrate then I recommend picking up a We-Vibe Tango. This is advice that really that goes for any toy with a bullet hole, because a Tango is going to be your number one investment.
Most of the work done by the Prostate Play is mechanical, and how the vibrations complement this depends on which bullet you use. The included vibe does admittedly perform better than anticipated, and you can feel its effects more readily than is typical for a toy with this set-up, but what it creates is very much a background sensation. There’s pleasant tingling going on in all the tissue in the vicinity of the toy, but it’s still just window dressing for the main event, which is that pressure created on the prostate. If you use a Tango then the vibrations become like a secondary feature of the toy in their own right. That extra rumbling strength takes the whole prostate play up to another level and pushes it into that territory where it starts to become something special.
The downside to the Prostate Play being powered by a removable bullet is that it limits how you can use the toy. Personally I quite like to sit down while I’m wearing a prostate massager, but when any bullet is inserted it sticks right out of the base and makes this impossible. It really would have benefited from a custom bullet that was recessed into the base, similar to what Nexus used in the G-rider, but I can understand why it would have been less practical for Tantus to go this route.

By itself the Prostate Play doesn’t do a whole lot, and what I mean by that is that it’s not a toy that you wear for the sake of wearing it. It’s not like a plug that you walk around wearing because you enjoy the fullness of it, or the feeling something rattling inside you, and it’s not the same as one of those Aneros devices which claim to be able to do almost magical things just from you flexing your pelvic floor. What it is is a practical toy; it’s a toy you’re going to want to put inside yourself when you intend to have an orgasm. It’s only once you begin to have sex or masturbate that you really notice the effect of the toy pushing so firmly on your prostate. It changes the sensation slightly, elevates it, makes it feel more intense. As that orgasm starts to build inside you it’s accentuated by that pressure on the prostate, all working in unison. If you couple it with a strong rumbling pulse pattern from an appropriate bullet, then it raises the bar again. It’s what I’d consider an orgasm enhancement tool, and it takes what your body’s already capable of, and just pushes it a little further. When you finally do hit that moment of release, it’s like one of those moments when a climax is unexpectedly greater than usual, and then you fall back feeling drained and content.

I think that it is ideal for use with a partner, because it’s something that you can set up and then just go about your business. You can focus all your attention on them, while the Prostate Play takes care of things on its end. There’s nothing to get it the way, distract, or require constant tinkering with, so it’s very convenient. If you are playing alone then you’ll find that it’s a toy that encourages you to use it with others in your collection. If you have a Pulse, a Cobra Libre, or a magic wand that gives you incredible sensations from your penis every time, then couple it with that action from the Prostate Play inside you and see where it takes you.

So what’s the verdict? If I’m honest, it’s still not 100% my type of toy, but that’s ok because that’s just me. What I do know though, is that it performs so much better than the likes of your Prostimulator, or Nexus, etc. That in itself is saying a lot. I definitely did enjoy my experience with the Prostate Play in the end, and while it’s never going to challenge something like the Lelo Hugo, it does make a pretty damn good budget alternative. On this basis I’d happily recommend the Tantus Prostate Play.

Thanks to Tantus for sending it over, and it’s available from their website!