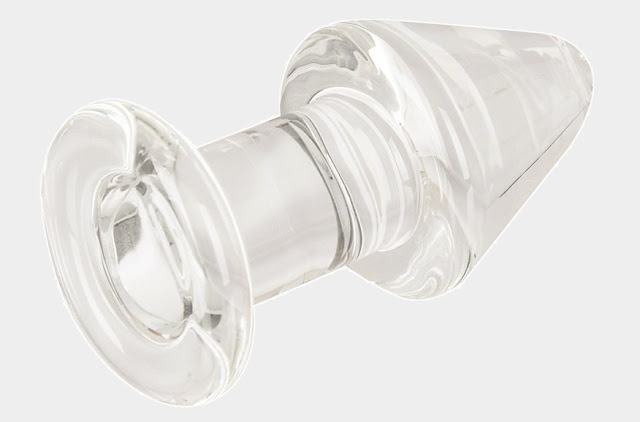 This week I’m doing a review for Bondage Bunnies. It’s a new website that mainly focusses on bondage gear for women, but they also stock a small assortment other bits and pieces that are worth checking out. They got in touch with me last month and asked if I would review something for them, so I picked out this lovely-looking glass butt plug.

The Arts Clair Passion plug is a rather straightforward butt plug from the German company You2Toys. What makes it interesting compared to the other glass toys I’ve tried in the past is that it’s entirely clear, with no form of embellishment at all, and actually I quite like this. Increasingly you find that glass toys are becoming more and more ornate, and some are actually quite beautiful, but every now and again it’s nice to make a return to simplicity.

As it happens I’ve actually been interested in the idea of a completely clear glass plug for a while, ever since a conversation I had with an exhibitionist acquaintance I used to talk to online. He was always experimenting with creative self portraits, and he told me of the time he inserted a clear glass plug and pointed his butt up towards an open window as the warm midday sun streamed through, catching the rays of light in the plug like a glass prism. It was an oddly romanticised recollection of sex toy use, and apparently enough to plant a seed in my mind.
The plug is a fairly modest-sized toy, though it’s not easy to gauge from images and probably looks a little more substantial than it actually is. It’s a total of 4″ long with 3 1/2″ that can actually be inserted, and around the thickest point it measures 5 5/8″ in circumference. Girth wise it’s probably a little bit up from being an absolute first time plug, but it’s not one you’re going to need a lot of experience to be able to manage.

Shape wise it’s a fairly standard plug with a gently tapered bulb at one end, followed by a nice straight neck and base at the other. The only slight difference is that the underside of the bulb, where it joins onto the neck, is completely blunt, meaning there’s no taper on the plug in reverse. The neck itself is a generous 1 3/8″ in length, giving the muscles plenty of space to rest on while the plug’s being worn, and it’s 3 1/4″ in circumference, meaning they’ll be able to relax a bit after passing over the bulb.
The plug is manufactured in China from what I’m assuming to be toughened borosilicate glass, though the packaging only mentions it being “glass” which leaves some uncertainty. Glass is a material that I enjoy both because it has a little extra weight to it, but also because it’s fun for temperature play. You can toss it into the fridge or a bucket of ice water before use and enjoy some pleasant chills.
In terms of use the plug is nice and easy to insert thanks to its taper, and it goes in comfortably all the way despite some initial concerns I had about the angle at the bottom of the bulb being a little pointy. Inside the body the plug stays in place well and it feels pleasant. You don’t get that great feeling of fullness due to its smaller size, but it gives a nice subtle variant of that familiar enjoyable sensation that comes from using a plug. Because of its size and shape it’s a really nice plug for long term use; it doesn’t overwhelm you with a feeling of being full or stretched, and the base nestles comfortably between the cheeks and allows you to sit down on it. What’s also nice in this regard is that because it’s glass you can use a silicone lube with it, which won’t dry out during prolonged use. Once you’re done with the plug it’s also quite comfortable to remove. This is another area I had concerns about due to the aforementioned bluntness, but thankfully such concerns proved unfounded.
One thing I really do like about the plug is strictly visual, and it comes back to it being clear. Because the glass is completely see-through it provides an intriguing view into the body. It shows you exactly what your body looks like when you’re wearing a plug, and creates almost a virtual gape, whereby you can peer through the base and see the sphincter clenched around the neck in a perfect circle. It’s quite a unique experience.
A nice feature of the plug is that it comes packaged with its own velvet storage pouch, so you have somewhere safe to keep it in between use. On the subject of packaging I was going to say that it’s fairly discreet, but the box does quite unnecessarily have a topless woman printed on one of the sides.
On the whole I do quite like this plug. It’s a nice, simple, quality little toy, that feels good to use, and that’s also quite interesting to look at. Due to its size its something that should be suitable for a wide range of people, and I’d feel happy recommending it.
The Arts Clair Passion Glass Butt Plug is available from Bondage Bunnies.
Tweet
Pin