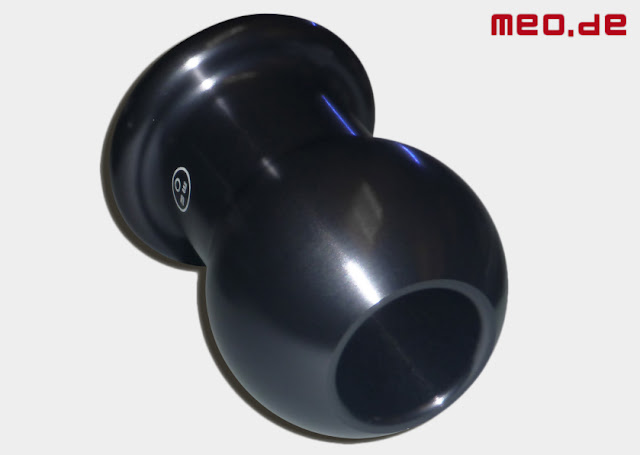 Last month I got a surprise package in the post from my German friends over at Meo.de, containing none other than one of their very own anal-stretching rings. As it happens this is a product that I’ve been aware of for quite a while, so I was especially pleased to discover that I now had one of my own to try out.
The Anal Stretching Ring from Meo is at its heart a rather stylish-looking butt plug, but what sets it apart and makes it that little bit special is that it has a hollow channel running all the way down the centre of it. In this regard it’s actually very similar to the Perfect Fit Tunnel Plug that I reviewed back in 2013, with the main difference being that this is made from a high grade aluminium alloy rather than TPR. Because of the similarities it’s quite useful to drawn comparisons between the two for the purposes of this review.
The 24/7 Anal Stretching Ring comes available in a total of six different sizes, aimed at every level of experience. I was sent the “small” which actually has a 6 1/4″ circumference, so you can fully imagine just how much bigger things get by the time you’re up to XXL. It really is only small in the relative sense, and not a beginner toy by any means. Size wise it is actually almost identical to the Tunnel Plug, which is both convenient for me and this review, and for anyone considering making a direct trade up from a TPR toy to a metal one. In terms of its other dimensions it has a total insertable length of  2 3/4″, split between a generous 1 1/4″ long neck and a 1 1/2″ long bulb, and it has a 4 1/2″ circumference around the neck itself.
The general shape of the plug is a bit like a funny little doorknob. The actual bulb is almost entirely spherical, save for the flattened tip which is absent due to the hollow passage running through it. The shape is certainly something to bear in mind as the lack of taper will have an impact on how easy it is to insert. Aesthetically it’s a very attractive toy, and it mirrors the roundness of the bulb with a completely circular flared base.
The plug is machined from one solid piece of high-grade aluminium, and it’s manufactured to a very high standard. The curves are all perfect, the edges are safe and rounded, and the surfaces all feel beautifully smooth. It really is a great quality piece, and because it’s metal it has that reassuring weightiness to it. The finish to the plug is some sort of black coating applied to the metal which gives it a very sleek appearance, and elevates it from that dull grey which is typical of aluminium.
When it comes to using the plug I’m going to suggest that most people are going to want to go for a warm-up toy first, and this is strictly down to its shape. The thing about round toys in general is that they have no taper, so there’s nothing to gently dilate the sphincter as you insert it, and the result is quite a rapid expansion of the muscle instead. This almost goes double for a round toy which is completely blunt in the section where what would be its tip is missing. As always I did endeavour to see if it was possible to insert without a warm-up, and indeed it is. With a toy of this size, and my level of experience, I was able to get it in on the first occasion without too much fuss, but I really wouldn’t be that confident if I was going one size up, so my advice still stands. What was interesting to me though is that I found the Stretching Ring far easier to insert under these conditions than the Tunnel Plug. One might be tempted to think that the soft flexible toy would be the easier and more comfortable one to use, but actually the rigidity of the Stretching Ring does far more to aid insertion by holding its shape as it pushes through the muscle.

Once you’ve got over that initial hurdle of starting the insertion it goes in very comfortably, just as with any other plug, and soon as you pass the mid point of the bulb the remainder seems almost to be sucked into the body. The big advantage of a metal plug here is that you can use a silicone lube with it, and nothing rivals the slickness of a thick silicone anal lube on a smooth metal toy. Inside the body the plug does feel extremely comfortable to wear, and immediately you can feel that extra weight that comes with a metal toy, yet it still feels very secure. The stubby design places the bulk of the toy just beyond the anus, and not deeper inside the rectum, so you feel the full extent of it nestled right up against the prostate, and the girth does give a reasonable sensation of fullness, though the size queen in me craved a little more. The neck of the plug is long enough that it leaves plenty of room for the sphincter to rest against, so it’s not sitting on the underside of the bulb and generating that sensation that it may slip loose at any second. The girth of the neck is also such that it allows the muscle to relax again a little after stretching over the bulb, but it still holds it open enough to give a nice sensation and aid with removal again afterwards.
If you’re considering wearing the plug long term then the base of it is pretty unobtrusive. It fits comfortably between the cheeks without digging into the flesh, it can’t be seen under clothing, and all importantly you can sit down on it.
The key feature of the Stretching Ring is the hollow down the middle, and yet I still haven’t entirely figured out the purpose of yet, but that might just be because I haven’t been exposed to much of the kink world yet. I’m sure it has plenty of uses for people in the know, so I’ll just leave it at that. The flip-side to this though is that it can be a liability. If you’re wearing something that holds you open like this then you want to make certain you’re completely empty and clean at the time, lest you ruin your favourite pair of underwear. Luckily Meo do have a solution for even this, in the form of a little rubber stopper for the hole which is sold separately.
Overall I have to say that I really do like this plug. It’s a great stubby little shape, its really well made, and you get those wonderful sensations of weight and temperature variation which come only with metal. Compared to the Tunnel Plug this has to be the one I prefer by far; while the other felt more like a bit of a novelty the Stretching ring is a serious piece of equipment, and not only that but it’s easier to use. I can’t claim to fully understand the purpose of the passage, but psychologically it is interesting to think about the notion of not so much being plugged up, but rather being constantly stretched wide open.
I’d be very happy to recommend the 24/7 Anal Stretching Ring, and many thanks to Meo.de for sending it over. You can grab it from them right now.
Tweet
Pin