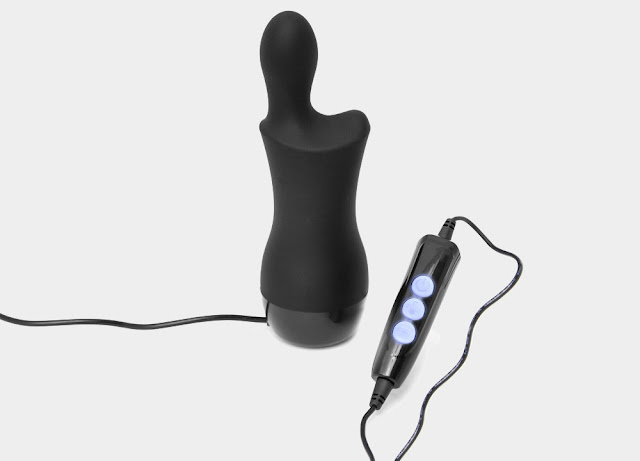 A couple of weeks ago I received a message from William, one of the owners of Doxy, the British company behind the award-winning Doxy Wand, asking me if I’d be interested in trying out their newest product the Doxy Skittle*. I haven’t yet had the opportunity to test out their signature massage wand, but having heard many a voice in the blogosphere rave about it, naturally I was eager to get my hands on their latest creation.
You can find out what I made of it below.

Update: The Doxy Skittle was rebranded as the Don by Doxy in 2016, following a trademark dispute with Wrigley over the name, but it remains the same product. I took this opportunity to revisit the Don and have included some subsequent thoughts.

The Doxy Skittle is possibly one of the most unusual-looking sex toys I’ve ever come across, and in my book that tends to be a good thing. The world of sex toys can often be a marketplace flooded with a slew of copycat products and regurgitated ideas, so when I see something this different the “innovation” lightbulb goes on above my head and I get excited.
The basic design of the Skittle is rather reminiscent of the lower half of a bowling pin, immediately giving away the origins of its name, and at the top of it it features this little insertable nub which is positioned off-centre and looks a lot like the teat on a cow’s udder. I’ve really never seen anything like it before, and it’s interesting to note that only 27% of its entire length is designed to be used inside the body. The product is constructed out of a nice solid plastic and covered in a layer of velvety silicone, and it all feels very robust.
The Skittle is a mains-powered sex toy, just like the Doxy Wand, and it comes with a very generous length of cable. From the plug to the control unit the cable measures 2.9m, and then from the controls to the Skittle itself there is another 0.8m of cable, making it very convenient to use if you don’t have a power socket directly by your bed, like me. The plug is one of these clever transformer units with the interchangeable prongs, which allow it to be used in any country, though it does only come with the corresponding set of prongs for the region you buy it in, but it’s not hard to obtain different ones online, or borrow them from another toy.
The concept of the Skittle is that it’s intended to be a unisex product, so if you’re a man then that means you have the choice of using it either externally on the penis, or anally, depending on your preference. It’s a pretty simple device to operate via the inbuilt controls, and they have the handy feature of glowing blue so you can always see them no matter how low the illumination is in your room. The Skittle turns on in a constant vibration mode when you hit the power button, and then the intensity can be adjusted by holding down either the (+) or (-) buttons. As it’s mains powered that means it’s incredibly powerful, and when you first fire it up you can see the nub at the end shaking from side to side and causing a motion blur around the edges. One thing I like is that when you turn the unit off again it’ll remember the intensity level you last had it set at, so it’s ready to go the next time.

As well as the constant vibration mode which comes on by default, there’s also a variable escalating pulse setting – if you know how to find it. For me it’s not the most intuitive design, so you are liable to miss it if you’ve never used a Doxy product before, or you like to dive in straight away with a new toy, rather than reading instructions. It’s activated by holding down the power button for a count of three whilst the device is turned off. Once the button is released the Skittle powers on into the pulsing mode, and the speed of the pulses can then be adjusted again by using the (+) and (-) buttons.

If you’re a fan of using vibrators on the penis – something I always recommend trying out – then you’re sure to enjoy the Doxy Skittle too, because not only is it powerful, but it’s also got those deep rumbly vibrations that surpass all others. If you’ve never tried it then it delivers quite a different sensation to a stroking action, and creates intense and very pleasurable orgasms, often of the toe-curling variety. The only downside in this regard is that it’s a bit cumbersome on the whole. It’s far easier to pick up your We-Vibe Tango bullet when you’re looking for some rumbly vibrations on the penis, than it is to manage the extra size and weight of the Skittle, and the fact that you need one hand to hold it, and the other to operate the controls. This is less of an issue though if a partner is using it on you.
In terms of an anal device the Skittle is pretty intense, but it does take a little bit of getting used to. Unlike most anal toys, prostate massagers, etc, the useable portion of the Doxy is pretty small, only 2″ long, and at first that does seem like a bit of an issue. As much as I like to complain about some of the Rocks Off toys completely overestimating how deep the prostate is, the modest nub of the Skittle seems to fly in the opposite direction, and it’s hard to imagine how it would hit the prostate at all. The first few times I used the Skittle that did actually seem to bear out. I had it inside me, I switched it on, and I felt all these deep rumbly vibrations emanating from it, only they weren’t going into my prostate. They seemed to be going anywhere but in fact, and mostly into my sphincter which was clamped around the majority of its length. I was disappointed to say the least, but then I decided to change tack. I moved the Skittle around, I angled it, I pulled it into my body, and sure enough I could feel the end of the nub prodding into my prostate, so I turned it back on again. This was my epiphany moment. Finally I felt the roar of those vibrations rumbling deep into my prostate, and noticed my penis starting to swell in direct response. Now to be honest here, I’m not going to completely let the Skittle off the hook, because a bigger bulb at the outset would have eliminated the need for any of that, but as it is it does work, and if you could have seen the look on my face you’d know that those vibrations worked well.

The strength of the vibrations from the Skittle is impressive, and they have that deep penetrating quality that I require from my prostate toys. You can feel the rumbling waves going deep into the tissue and stimulating the core of the organ. One of the best ways I found to use it was with a shallow thrusting motion, pulling the Skittle deep inside me, and then letting off slightly, to create a manual massage of the prostate alongside the vibrations. This also had the added benefit of pressing the external portion of the Skittle firmly up against the perineum, which provided another pleasant sensation on top of what was happening internally. On constant mode I still found myself craving a little more power, as so often I do with anything used on my prostate, but it was on the pulsing mode that the Skittle really came into its own. There’s no adjusting the strength in pulse mode, only the speed of the pulses, so the power of the vibrations will gradually ramp up from zero to max as quickly or slowly as you desire, and for me the slowest settings proved to be mind-blowing. With the Skittle firmly pulled into my prostate I could feel the power building, edging ever higher, feeling more and more intense by the second, and it was like nothing I’d felt from any other toy. It finally reaches its glorious peak and then it drops off, pausing for a split second, before starting again from the bottom. It’s one of those moments where you sit there and think to yourself “wow…” and something that everyone needs to experience for themselves. It’s probably the closest I’ve felt I’ve come to achieving a prostate orgasm, and something tells me that with a little more practice it could be doable with the Skittle.

Like many mains powered devices it is that little bit more noisy than the majority of battery powered toys, but it’s not too wild so I wouldn’t worry about it being heard through a closed door. The sound does seem to amplify though if it makes contact with a mattress, so it’s quieter in hand.

For me the Doxy Skittle is a really interesting device, because the design is completely unique, and it gives an unparalleled strength of vibrations for a toy that can be used anally. It does have its drawbacks, but then it’s trying to do a lot of different things for different people, so you can’t expect it to be perfect for your particular use. While the small nub does make it versatile, and especially accessible for those not accustomed to anal play, it does also hold it back. When it works, it works amazingly, and those powerful pulsing vibrations are mind-blowing, but I would really love to see them make a new model with a bigger insertable portion, which really takes it to the next level. Though I really wasn’t sure about the Skittle at first, I have been converted, and would gladly recommend people give it a shot.
Many thanks to Doxy for kindly sending the Skittle to me to review.

The Don by Doxy is available now from the following retailers: SexToys.co.uk, Simply Pleasure, and SheVibe.