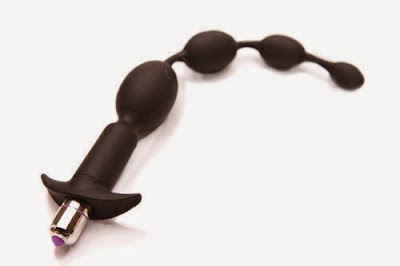 This month my new customer service friend at Tantus, Captain Sparkle Bunny, has sent me their brand new Tantus Vibrating Progressive Beads which are due to launch officially any time now, and you can get a early preview right here with my review!

As always, follow the link below for more.
The Vibrating Progressive Beads are an interesting new product concept from Tantus, a company which is never afraid to shake things up in the world of sex toys. When I first heard about them admittedly I was a little on the fence; I don’t have a great deal of experience with anal beads, but enough to know that I find them somewhat underwhelming, so I was intrigued to see where Tantus was going with this idea. These aren’t the company’s first foray into the world of beads, in fact I reviewed their older product a little over two years ago, but these are their most traditional set of beads yet, no longer employing that almost rigid style and marking a break into new territory.
The beads are 11 1/2″ long in total, with 11″ that can actually be inserted and the rest comprising of the base. The design features four ovoid beads of gradually increasing diameters, connected together by thin and flexible bridges of material. The first bead at the tip has a circumference of 2 1/2″, the second  3 1/4″, the third 4″, and the fourth and final bead 4 3/4″, so it’s a steady journey up to something which still is pretty manageable for most people. Attached to the final bead is straight neck-like section with a 3″ circumference which adjoins the anchor-style base that can be found in many of Tantus’s latest designs.
Like all Tantus products the Vibrating Progressive Beads are made from 100% platinum silicone, guaranteeing you an odourless and completely body-safe product. In this instance it’s quite a firm silicone that’s been chosen, as you’ll notice if you try to squeeze one of the beads, but in the bridge sections between the beads it’s very flexible, and you can even stretch it a little if you pull gently on the beads. The surface of the beads is matte, and has this lovely soft velvety finish, which not only feels lovely against the skin, but all helps lube to adhere to the surface. As always the Beads are made to Tantus’s impeccably high standards and there’s not a defect to be found anywhere. There is evidence of a slight mould line running around the toy, but it’s almost imperceptible and wouldn’t bother even the most sensitive person. Trying to find it by touch is harder than finding the end of a roll of sticky tape.
Because of the progressive design of the Beads it makes them incredibly easy to insert, and fun too. You simply press each one up against the anus and the body seems to readily swallow them up with very little fuss or resistance, as though you were feeding it series of hors d’oeuvres, from a small olive, to a grape, to quail egg, to a medium chicken egg. Each one pops in and then paves the way for the next size up moments later. The downside though is that when you take them back out again they have less of an impact. That first big bead comes out with a pop, but then because you’re already relaxed to its size as the series of smaller ones follow they barely elicit any sensation from the sphincter. This even tends to be the case if you made a concerted effort to clench your sphincter tightly as you remove them. You just don’t get that sequential “pop-pop-pop-pop” like you do with some other beads, which may result in disappointment if that’s something you were specifically looking for.
The Vibrating Progressive Beads do have another trick up their sleeve though, and that lies in the other part of their name: they vibrate! If you examine the base of the beads you made notice that it’s very similar in design to the Tantus Perfect Plug Plus, and indeed you can wear the beads just as though they were a butt plug. With all 11″ inserted and gently snaking around inside your colon, the flat neck section provides the perfect place for your sphincter to rest up against, while the anchor base nestles comfortably between the buttocks, and then with a press of the button you can turn on the 7-speed vibrating bullet. Because of the nature of the toy you’re only going to feel the vibrations in the immediate vicinity of the bullet, i.e. the sphincter, a little in the prostate, so don’t go expecting them to travel all the way to the farthest bead, but they do provide a lovely bit of added sensation. It gives you the ability to play around inserting them like beads, then wear them all day like a vibrating plug, and finally go back to that bead experience again when you remove them. I can’t think of any other product that offers that, so it’s a nice mash-up. There’s also the option to pop out the vibrating bullet and replace it with something stronger, such as a We-Vibe Tango, or even not use a bullet at all, so there’s inbuilt flexibility.
On the whole I do quite like the Vibrating Progressive Beads; they’re not enough to sway my mind on anal beads in general, but the fact that they’re a combination toy means that they have a little more to offer, which is perfect for anyone just building their sex toy collection and looking to experiment with as many different sensations and modes of play as possible without breaking the bank. On this basis I could happily recommend the product to someone; you get an assortment of sizes to insert, something that goes deep, something you can wear, something that vibrates, and something you can pull back out and see how you like the sensation.
You can get the Vibrating Progressive Beads right now, directly from Tantus.
It’s also available from the fine folks at SheVibe
Tweet
Pin