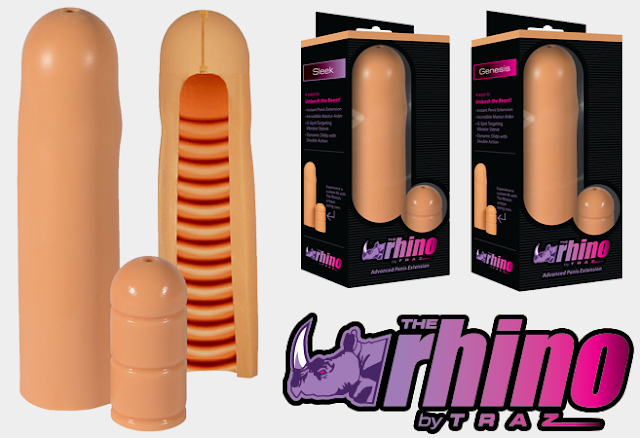 Recently the company Traz got in touch with me and asked if I’d be interested in reviewing their new silicone penis extender, the Rhino. Because it’s more of a couples’ toy I decided that it would be best to hold off on reviewing this for now, but they came back and offered me the chance to run a giveaway with them, and I of course agreed as I do love to share free stuff with my readers.
To find out more about the Rhino, and to enter the competition, simply head below!
There are a number of penis extenders on the market today, but what they tend to have in common is the materials they’re made from, namely TPE/TPR, not something I’d be eager recommend. These materials are fine to wear around your penis, but in terms of inserting them into someone else’s body they’re porous and really not the best choice. What makes the Rhino different is that it’s made of silicone – one of my favourite materials – and so it’s non-porous, non-toxic, and completely body-safe. For this reason it meets with my principles of only giving away safe products that I’d be happy to use myself. I’m pleased to see another company going down this route because the only other silicone penis-extender that I’m aware of is made by Vixen, and variety is always a good thing.
The Rhino comes in three parts: there’s a hollow outer sleeve which is rolled down over the penis to create extra length and girth, a solid plug which is inserted into the end of the sleeve to stabilise the extra length, and a locking pin which holds the two pieces together. It disassembles for easy cleaning, and to allow you the option of wearing it just for added girth, or to increase your length as well. The Rhino can also be placed over a dildo or vibrator as well as for use on the penis.

One of the unique features of the Rhino is the ribbed interior of it. This ribbing both helps the Rhino to grip onto the penis during use, but it’s also designed to stimulate the penis during thrusting so that both partners can feel pleasurable sensations. It does this by using what they call “Motion Transfer Technology,” which takes advantage of the fact that the penis will move around somewhat in its own skin, even while the skin is being gripped by the Rhino, allowing stimulation of the head to occur. The Rhino also forms a vacuum inside which delivers a sensation of suction during thrusting to further enhance the man’s pleasure.

The exterior of the Rhino is completely smooth, but does incorporate a slight ridge designed to stimulate the G-spot or prostate of a partner.

There are three different Rhinos available: the original Genesis which offers a size of up to 8″ x 2″, the slimline Sleek which is 8″ x 1 ½”, and the Stampede which is also 8″ x 2″, but with a little extra girth around the tip. The Rhinos are all available in a choice of Vanilla, Cinnamon, or Chocolate colour, to help match with your skin tone.

So onto the competition. Traz are letting me give away three Rhinos! That means one of each size is available to be won, and you can enter from anywhere in the world. Simply follow the instructions on the widget below to rack up as many entries as you’d like, and in two weeks I’ll randomly pick three winners and Traz will ship the prizes out directly to you. It couldn’t be simpler, good luck!