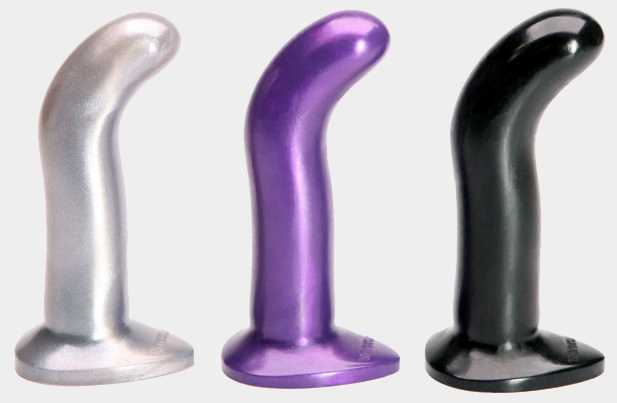 Last month Tantus’s new head of marketing, Peyton, got in touch with me and asked if I’d like a few new toys to review, and then a week ago a lovely package showed up at my door brimming with goodies I’d picked out. She was nice enough to also throw in one of the new Slow Drive dildos, which I will insist on calling the “Slow Ride” after the Foghat song, bringing back many memories of Guitar Hero 3. If I’m honest then it’s probably not a toy I would have picked for myself, just based on its shape and my understanding of my body, but always keen to be proven wrong it was the first toy I ended up trying out, and sensing that this would be an easy review for me to write I thought I’d share this one with you first.
Get the lowdown below.
The Slow Drive is a new toy which isn’t really a new toy at all. It actually first made its debut many years ago under the name of “Faerie,” long before I’d even begun my journey into sex toys, and like many product lines it fell victim to discontinuation, vanishing mysteriously like its namesake. Then, back in April of this year, it made a brief reappearance once more in some stunning limited edition colours, and now finally it’s back on the market again full time, and in three new colours to pick from: classic midnight purple, a stunning silver, and the obligatory-yet-somewhat-dull black.

As always the Slow Drive is made from Tantus’s blend of ultra-premium platinum silicone, so you know it’s completely odourless, non-porous, and body-safe. It’s also made to Tantus’s exceptionally high standards, so there’s not a seam or mould-line in sight, nor any bubbles or surface defects of which to speak. You really can’t fault Tantus in terms of materials and construction, and this is why I hold them in such high regard. The silicone itself has a completely smooth finish to it, rather than being matte, and it’s the usual firmness that you find in the majority of Tantus toys, so it has some flex to it when bent about, but without being floppy, and it has a little bit of give in the surface when you squeeze it gently.

When it comes to using the Slow Drive it’s one of those dildos that’s very easy and comfortable to first insert. The tip is gently rounded and not too large, allowing it to steadily dilate the sphincter, and the smooth surface lets it glide right in without a hitch. In terms of size I’d say that it’s definitely suitable for anyone more on the beginner end of things, because I really can’t foresee it causing much difficulty. I find that the best way to insert it is whilst lying on your back or side, because the shape pretty much prohibits squatting over it as the tip sticks out at a 45 degree angle rather than straight up.

Once you’ve got the initial insertion over with I found that it was awkward to get much more than half of the shaft inside, simply down to the shape of it. The idea of it is to insert the Slow Drive with the hook curving upwards towards the prostate, whereas the rectum actually curves back towards the spine in the opposite direction, so once you get halfway the tip pokes into the prostate and the whole thing won’t go any further. The trick I discovered for getting it in all the way was actually to first insert it the wrong way around, then spin it 180 degrees inside the body, and slowly pull it back out again the right way up. This way you get to experience the entire length of it moving over the prostate, and you do feel something of a bump inside as that hook of the tip drags along the way.

The question really is how does it all feel? Well it’s hard to explain, and yet it’s also easy to explain, because the short answer is “nothing.” I pretty much felt nothing from this toy; the shape wasn’t pleasurable for me at all, and while I could have put money on that from the outset, it’s also an occasion where I take no joy in being proven right, because I read an exchange over social media recently where another reviewer mentioned how much her husband loved the sensation from it, rather brilliantly describing it as being like “getting fucked in the ass by a pirate.” Now that’s the sort of experience I wanted, but no matter how many times I tried it, and how many different ways I went about it, my timbers remained unshivered, my main sail hung limp, and no booty had been plundered. The theory is often posited that what’s good for the G-spot is also good for the prostate, but a lot of the time I just don’t find that to be the case, and here is a prime example. One positive thing that can be taken from it though is a hurrah for body diversity. Yay for things that work for someone else that don’t work for me. The difficulty therein, however, is how do you know if you’re like me or not? Is the Slow Drive your ticket to a swashbuckling good time, or simply your Never-happening-land?

The key problem for me with this toy is the shape, it’s just far too severe for my prostate. I respond best to something which goes after it with a prominent ridge or two, rather than a mighty great hook – take the Echo for example. The other issue with the shape is that it inhibits thrusting and makes it quite awkward and disjointed to accomplish, and my prostate really responds to the sensation being rubbed back and forth with constant contact, such as from the Adam, or even the Metal Worx Curve. It feels to me as though the Slow Drive simply nudges and tugs at my prostate, rather than making significant contact with it and stimulating it in a meaningful way. A good comparison I stumbled upon only this week is with the new Fun Factory Joupie. It’s a vibrator with a straight shaft and only the slightest hook at the tip, but thrust it rapidly back and forth over the prostate and it delivers the right sort of sensation. If you can relate to my examples then I would say that the Slow Drive isn’t for you either. Personally I think that out of Tantus’s newer toys it’s the Sport that would actually be more suitable for prostate owners, because it has a shape that’s quite similar to the handle of the Plunge Paddle that I tried. I can see that bulbous tip and largely-straight shaft being far more effective.

So what for the fate of the Slow Drive? It’s a conclusion that can almost go unsaid, because I can’t recommend it – at least not in terms of function. It’s not a toy for me, or for men with bodies that respond like mine, but that’s ok because clearly there are people out there for whom it’s good. It doesn’t change the fact that it’s still a well built toy that utilises top notch materials, so it’s not a criticism of Tantus, it’s simply a mismatch between toy and user. Even if functionally it’s not suitable you still have to admire the funky shape of the design, and I’m almost tempted to dress it up for Toy With Me Tuesday as a curious worm poking its head up out of the lawn. It would be a shame to waste it after all.

The Slow Drive is available directly from Tantus.

If you’re in the UK then check it on on SexToys.co.uk