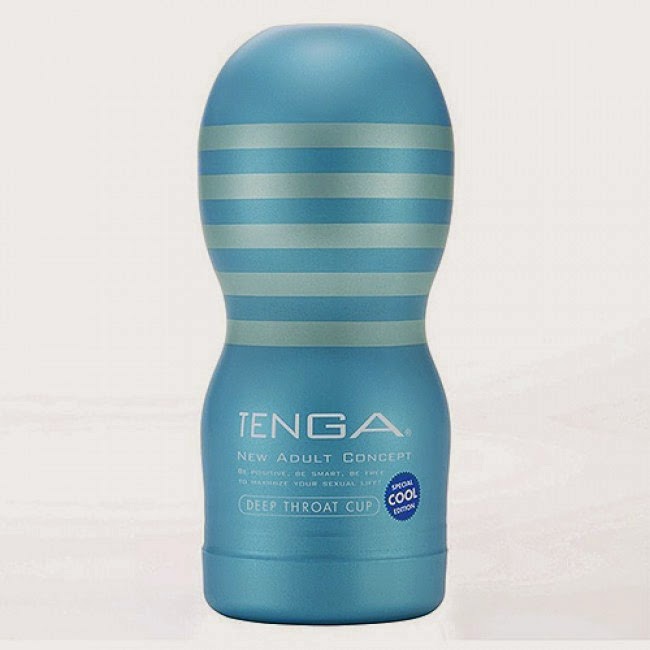 Recently I was lucky enough to win myself a new limited edition “Cool” Tenga Deep Throat Cup from SexToys.co.uk, via a little summer competition they were running on Twitter. I was planning to add it to the review bank at some point, but then another company got in touch with me and asked me to review a very similar product from a different brand, so I decided I might as well do this properly and compare the two. I’m going to start with a general review of the Tenga first, because it is the original, and then we’ll see how the other one holds up in a subsequent post in a few days time.

The Deep Throat Cup is part of Tenga’s range of single-use disposable products, which also includes the Tenga Eggs, but while the two are quite similarly-priced the Cup is that much more robust and incorporates a solid shell, like a miniature Fleshjack.

The whole Cup is 6 1/8″ tall by 2 1/2″ wide – making it not all that much bigger than a beer can if you want to imagine how it is to hold – and you get pretty much all of that height in insertale length. The outer shell is made from a single piece of hard plastic in a vaguely hourglass-style design, giving a comfortable groove to wrap your thumb and fingers around whilst holding it, and the interior is lined with soft-stretchy TPE, much like that used in the Tenga Eggs and Flip Holes. Because the Cup is built as a completely self contained unit it’s not intended to be taken apart, so the only access into it comes in the form of the end cap at the bottom, and a small vent hole at the top.
The Deep Throat Cup comes pre-lubricated ready for instant use, which is a rather handy feature. Once you remove the cap at the end you’ll notice that not only have they lubricated inside the toy, but also all around the orifice, so there’s no need to lubricate your penis prior as it’ll slip right in with ease. In the “Cool” edition they’ve used a special cooling lubricant which gives you a nice whiff of menthol as soon as the Cup is opened.
I found that upon first insertion the Tenga Cup felt quite snug around my penis. The head passed easily though the stretchy material of the narrow 3/8″ wide orifice, and into the first chamber, but as I pressed on to the full depth there was a definite feeling of resistance. It’s a slightly odd feeling to describe, because I wouldn’t call it “tight” – there wasn’t that sense of tightness that you get from some masturbators, where there’s an strongly stimulating sensation of an elastic material squeezing and almost strangling your penis, instead there was just a general feeling of pressure around the shaft, trying to force it back out of the hole. A sort of “snug” feeling, for lack of a better word. Interestingly when I did let go of the Cup the whole thing popped off the length of my penis, but I have to say that this “snugness” doesn’t actually adversely effect the use of the toy in any way, at least it didn’t for me, am I am quite thick, though if you’re someone who’s pushing around 6″ in circumference then it could be another matter.
The inside of the Cup is very liberally lubricated, so you get a nice slick and slippery passage down the full length of if, and that definitely helps when you’re using a firmer stroke in one direction to overcome that “snugness.” The cooling lubricant has a fairly subtle effect and does feel quite pleasant, but I was expecting something a little stronger, with a noticeable tingle or refreshing chill like I’d had from other lubes and even shower gels, so perhaps it’s a little disappointing on that front. It’s still a nice sensation to have just for a change though. 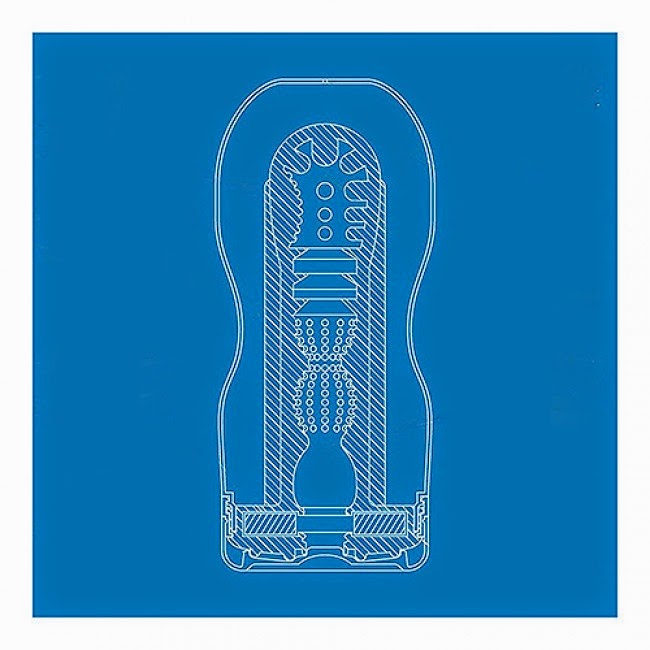 The soft TPE which forms the central channel of the Cup is textured, and separated into different chambers each with their own choice of bumps and ridges. I won’t bother explaining them too much because I have a diagram which does a far better job of illustrating what you can expect. I recommend starting quite slowly when thrusting, because then you can really identify all the different areas and lumps and bumps that you’re feeling. I almost like to think of it like Braille for the tip of your penis; rubbing the head over all these textured areas and trying to tell a story. The Deep Throat Cup is especially good for long strokes, because then you get the whole spectrum of sensation all in one. It may not be the deepest toy, but from end to end the head goes on quite the journey of stimulation, so I wasn’t really bothered that an inch or so of shaft couldn’t fit inside. The whole texture gently brushes and massages the head all around with every stroke and feels great. My favourite area has to be where all the nodules are in the middle, because these work absolute wonders on the frenulum, and nothing gets me off more than having that region stimulated. Eventually when it does come time for shorter strokes that’s the part of the texture that I focus on. The Chamber at the end is a funny one, because it has different textures on different sides, and what I like about that is that it means you can rotate the toy when you’re using it to find the one you like the most, or just for a bit of variety.
When it comes to thrusting with the toy at speed the individual textures become somewhat lost, and they’re just not prominent enough to be discernible. I don’t think that this is necessarily a bad thing though, because the textures all just seem to meld together into one very pleasurable blur, rather than you losing them. What I like about the Deep Throat Cup is that it’s not over-stimulating; it delivers a lot of enjoyable sensations, but it doesn’t overpower you and have you needing to stop every few minutes for fear of cumming too early. You can carry on for a reasonably long time, allowing things to slowly build up, until you’re ready to let loose.
I mentioned at the start that there is a vent hole in the top of the Cup, and this allows for air to escape during use, and in fact if you bend over it you’ll be able to feel little menthol-scented puffs of air coming out. The other use for it though is for creating suction by covering it with a finger during the out stroke. This actually works surprisingly well, and you do get a strong sucking sensation from it, but in the process the toy starts making quite noisy slurping sounds. Personally I don’t like too much suction as it diminishes the amount of texture you can feel, so it’s a trade off.
After sitting here and going through all the points of what I like so much about the Deep Throat Cup, the biggest downer is that it’s a disposable toy, because not only would I recommend it, but I want to use it again. The truth is though, I think you probably can use it again. Mine certainly didn’t start falling apart after once use, and it still has plenty of lube inside, so I’m going to hang onto it. The only thing you have to be careful about it not ejaculating inside it, because washing it out would be tricky, and I don’t imagine it would air dry well either.
I have to say that I’m really impressed with the Tenga Deep Throat Cup. It may not have that pillowy lifelike feel of a Fleshjack insert, but it has a soft comfortable interior with a stimulating texture, and honestly it’s the best thing I’ve ever put my penis in for under £12. In fact I’ve had more expensive toys which I liked less. If you want to try out a great little masturbator, but don’t want to shell out for the expensive ones yet, then I really recommend one of these. Use it for a week and you’ll be a complete convert.
The Tenga Deep Throat Cup Cool is available from SexToys.co.uk and Lovehoney.