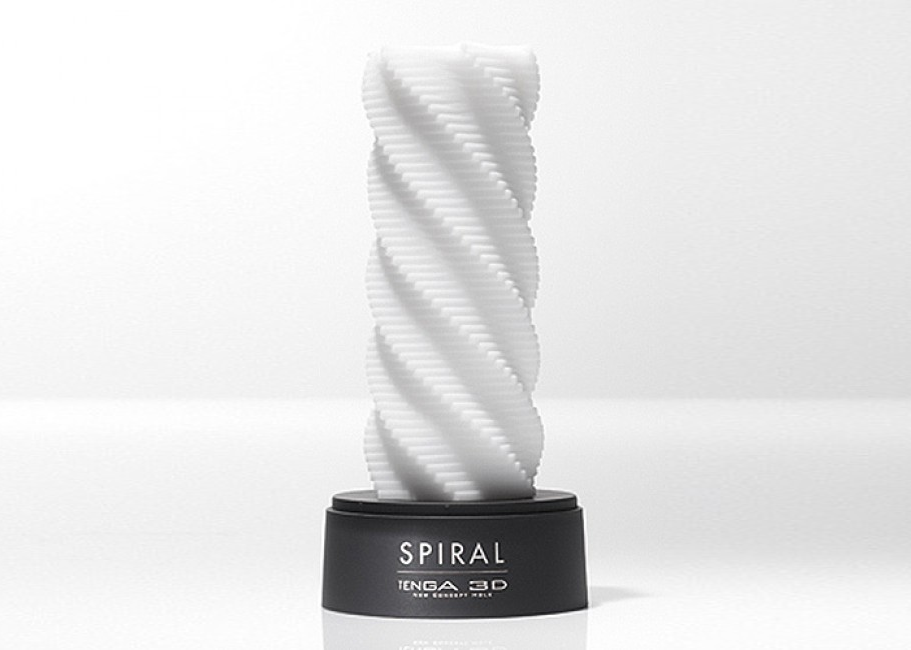 I can’t remember the last time I reviewed a new masturbator, which is a little surprising when you might assume that they’d be the bread and butter of any male sex toy blog. A lot of the time I seem to get caught up in more prostate-focused toys, so this should be a refreshing change of pace.

I’ve actually been looking for a decent mid-ranged masturbator for a while, because for the most part these toys seem to be split into two distinct categories which couldn’t be further apart. You have the likes of your Tenga Flip Holes and your Fleshjacks, which are large, hard-cased, reusable products, and come with a price tag of up to £60 depending on where you buy them. No matter how many times I say that they’re amazing, for some people that price point will always be a hurdle that they can’t quite get over, and that’s fair enough – even I waited to buy my first Fleshjack until it was on sale for £35. At the other end you have the £10 toys, the entry level single-use disposable products, and the smelly Chinese-made creations which express no such limitations but start to tear apart before you’re done trying them for the first time.
When Tenga came out with their 3D range last year I was immediately intrigued, because they did seem to be a line of products which finally bridged that gap between the two extremes. When I was pondering out loud about them on Twitter recently a representative from the company kindly offered me one to try out, so now I get to review one for you and see if it fulfils its niche as I had hoped.
The 3D range of Tenga products includes six different designs, all which appear rather sculptural and attractive when you see them stood together on their stands. It’s easily Tenga’s most artistic collection of toys, with each brilliant white piece looking as though could have been hewn from a block of marble. Six gives you a nice element of choice when you’re contemplating what to try, but potentially almost too much choice for those unfamiliar with male sex toys and unsure where to start. Thankfully, though, there are reviews around to help, making it less of a complete stab in the dark. I decided to begin from a point of familiarity and picked out the Spiral, as it reminded a bit me of one of my favourite Fleshjack textures, the Vortex.
The Spiral is actually a surprisingly small toy – and naturally that goes for the rest of the 3D range too. It’s never easy to gain a proper sense of perspective from a lone image devoid of reference points, but it measures in at only 4 1/2″ tall by 1 7/8″ wide. It’s firmly in the territory of pocket-sized masturbators, and a world away from the likes of the Flip Hole.
The design of the Spiral is pretty much given away by its name, but it actually has two levels of texture going on. The predominant shape is that of the spiral itself, which stems from a hexagonal end piece, giving six peaks and six grooves which swoop around and around the length of the toy. Within the spiral the entire surface is ribbed with a step pattern, giving a staircase-like appearance as it twists around from end to end. These ribs feel most prominent at the peaks of the spiral, and are more shallow as you sink into the grooves.
The Tenga 3D toys are made from a material called “Ag Antibacterial Elastomer” where the ‘Ag’ is the chemical symbol for silver, which is what gives the material its antibacterial properties. It’s a really stretchy material, so it should accommodate any penis size, and it feels lovely and soft when you run your fingers and hands over it, and feel the little ridges ripple back and forth. Even though it’s an antibacterial material, because it’s an elastomer it is porous, and therefore shouldn’t be shared with anyone, because it can’t be fully sterilised after use.
When it comes to using the Spiral the first thing you need to do is to flip it inside out, putting all that lovely texture into the channel where the penis is going. Looking at it in this configuration gives a completely different view of it that you wouldn’t have imagined before, and if you peek through the opening then the inside of the Spiral is just like looking down the barrel of a gun in the title sequence of every James Bond film. This gives a much better perspective of how it might feel, compared to seeing the texture on the outside. 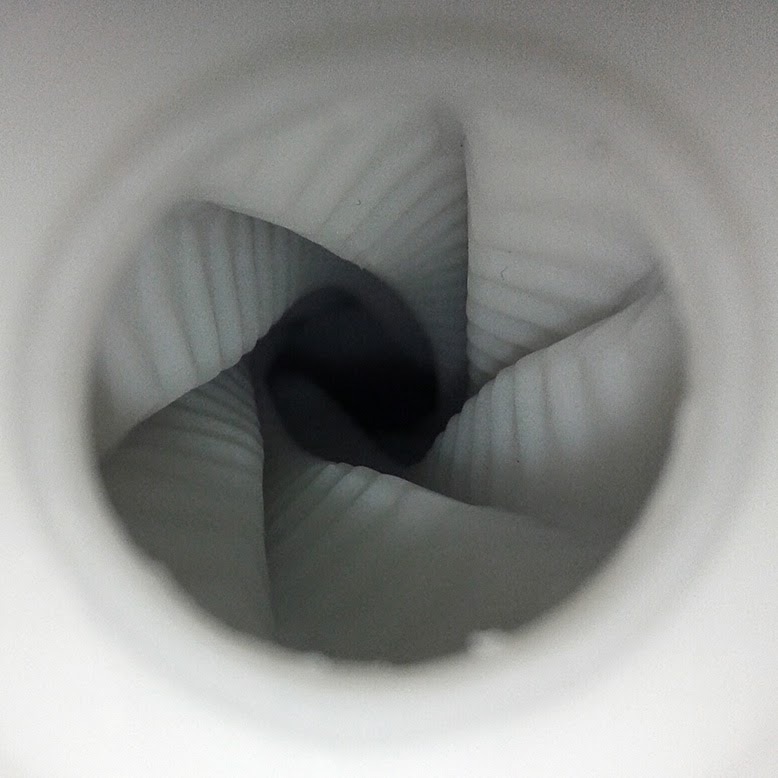 The opening to the 3D is quite narrow, and because the whole thing is floppy it’s not quite as easy to insert yourself as with some other toys, but provided you have sufficient lube over yourself, and around and inside the toy, then the material readily expands to allow entry. As the 3D range all feature a closed end, and are quite snug-fitting, you will tend to get an air pocket at the end which can cause it to balloon slightly. As a matter of preference you can leave it there, or squeeze it out to help generate a bit of suction during thrusting.
Once you start to use the Spiral the feeling that you get from the texture is really quite intense, almost bordering on discomfort, which comes as a little bit of a surprise compared to how soft the whole thing feels against your hands. For this reason I found it best to start off quite slowly with the stroking motion, and without any external pressure being applied, allowing time for my penis to adjust to the level of sensation, which thankfully didn’t take too long. As soon as you’ve become accustomed to how it feels you can begin to build up a faster motion, and it begins to transition into pleasurable feedback from using it. Somewhat unusually the region of the penis which experiences the greatest impact from the texture is the corona of the glans, and you can feel each little ridge rubbing back and forth across it all around the head. The frenulum, on the other hand, experiences very little in the way of stimulation from this texture, which is unfortunate as being the most sexually responsive area it’s the place I like to feel things in most.
One of the upsides to the 3D range is that because they’re caseless you can squeeze the soft material as firmly as you like, applying a pleasant degree of pressure to the penis, and changing up how the experience feels over all. It’s handy because you don’t get that feeling of overwhelming tightness that you get from some other masturbators, so you have to option to clench it as much as you want, or let off a little if you fear you’re reaching climax too soon.

When you finally do reach orgasm with the toy I found I had to stop thrusting with it immediately, because the heightened sensation in the head that comes with climax just made the intensity of the texture suddenly unbearable. This is a bit of a let down, as continuing to stimulate yourself during ejaculation is one of highlights of the orgasmic experience, so having to just stop dead felt a little bit jarring, and had a negative impact on how much I enjoyed the orgasm. A lot of what this comes down to is penile sensitivity, and this varies a lot from person to person, and can be affected by things such as age and circumcision status. If you’re someone who has an exceptionally sensitive penis, and barely likes any direct stimulation of the head, then this texture is not for you. You probably wouldn’t even get to the middle stage where I found that it felt pleasurable, and instead would just hate every minute. If on the other hand you don’t find that your penis is very sensitive, and you struggle to reach climax, then the intensity of this texture could be ideal for you, and you’ll find yourself merrily thrusting away with it post-climax.
A nice thing about the closed-ended design, is that once you’ve cum the mess is all self contained, so you needn’t worry about it leaking out of end caps, or having to mop it up with tissues. You can simply walk to the bathroom and slide it off over the toilet, dumping the contents into the bowl.
Cleaning the Spiral is also a nice simple affair, as you just have to turn it inside out once more, rinse any fluids from the surface, and place it back onto the stand it comes with to leave it to dry.
Trying to sum up the product is tricky, because I like everything about it except the texture, and that’s a pretty big part of it. I think I’d reach two different conclusions if I were reviewing the Tenga 3D in general, rather than the Spiral specifically. I have to say that that texture just isn’t for me, at least not with that material. It was just too much, and that’s my fault for picking it, but I make these mistakes so you don’t have to. It’s a texture that’s only going to work for people who need a stronger level of stimulation in their penis to get off, for everyone else it’s going to be uncomfortable. The range in general, it’s well made, well packaged, beautifully designed, easy to use, easy to clean. If you can find the right texture for yourself then I’d probably recommend it for what it is and at the price point it sits, because amongst those other 5 there has to be one to suit everybody. I’m really starting to wish I’d gone for the Polygon instead, but never mind.
The Tenga 3D Spiral is available from these fine retailers: