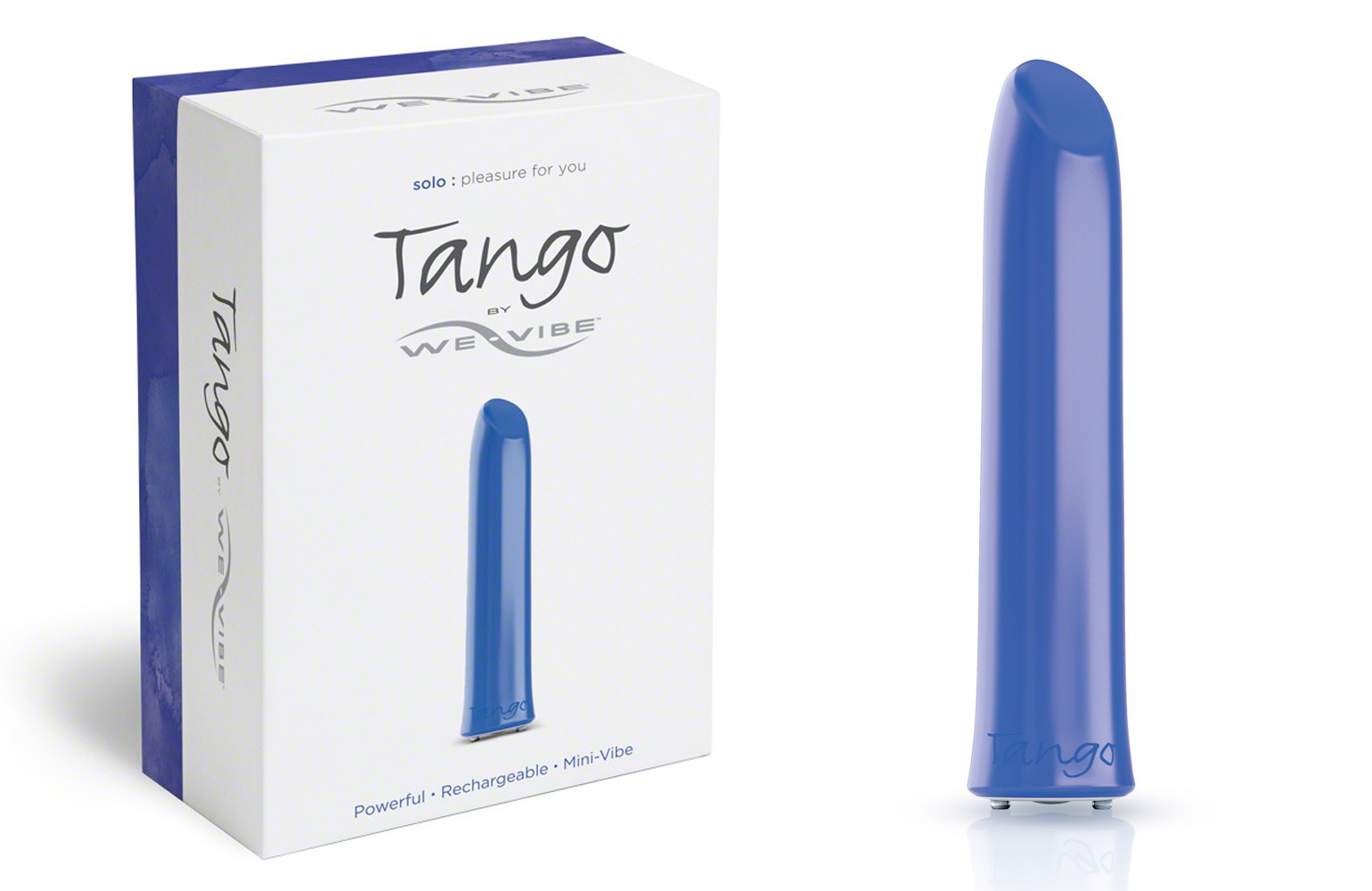 Two years ago I went on a quest to find a powerful bullet vibe that I could use in place of the buzzy battery-powered vibes that came packaged as standard with many prostate massagers and butt plugs on the market, and that quest lead me to the We-Vibe Salsa. Almost instantly the Salsa became my all time favourite bullet and I was ready to recommend it to all who asked – and even those who didn’t – but then about a year later two things happened: We-Vibe announced that they were phasing out the Salsa in favour of its identically-powered yet differently-shaped cousin, the Tango, and the power button on my Salsa gave up the ghost, becoming temperamental at best and entirely unresponsive otherwise.
Naturally I was quite upset to suddenly be Salsa-less, but I muddled along and made do with substitutes where I could, and then suddenly this month the generous folks at Simply Pleasure came to the rescue and offered me a new We-Vibe Tango to review. I say ‘new’ because it turns out that while We-Vibe were phasing out the Salsa, they took the opportunity to make a few design improvements to the Tango, and you can find out what I think about the changes below!
Traditionally bullet vibes have always been considered a product almost exclusively for women, but with more and more unisex toys containing bullet holes these days, items such as the Tango are proving to be a convenient powerhouse to give a welcome boost to an assortment of other novelties in your toy drawer.

The Tango is a nice compact vibe which measures in at only 3 1/2″ long by 3/4″ wide, putting it just a nose ahead of the Salsa (or 1/8″ to be precise). It’s a little longer than the battery powered bullets you get included with some toys, but the width allows it to easily fit inside products made by Tantus and Rocks Off amongst others. The body of the toy is manufactured in one single piece from ABS plastic, and comes in a choice of only two colours, blue or pink, down from a selection of six in the old Salsa/Tango line. This does make the product feel a little more gendered now, but I’m sure it’s simply a reflection of which colours retailers reported as being the best sellers. The surface of the plastic is very smooth and shiny, and they’ve even managed to eliminate the faint moulding moulding mark that was on the tip of the Salsa, leaving it flawless. The end of the bullet is angled on one side, giving it a flat surface which resembles a tube of lipstick, while the other side of the tip is gently rounded as on the Salsa, but it doesn’t reach quite such a pronounced point at the end. The base of the toy is finished off with a solid white silicone-rubber cap where the power button is located. The Tango has a lovely sleek appearance, and as well as being attractive it also looks quite discreet.

As with the Salsa the Tango has eight modes in total: four differing speeds as well as four varying vibration patterns. This makes it especially good if you’re going to use it inside another toy, as standard bullets typically only have one mode of on or off. The bullet is activated by pressing the button at the end once, and every subsequent press of the button will change the Tango to the next mode. Once you cycle through all eight modes pressing the button again will switch the vibe off. If you want to switch the vibe off immediately then holding down the button for a couple of seconds will do this, and the next time you turn the vibe on it will remember which mode you were using last, which I found to be a very handy feature. The button is nice and responsive, you don’t have to push it too firmly, and it feels reassuringly well-built. I said the same thing about the button on the Salsa before it failed on me, but you can feel that the button in the Tango is one of the areas that has been upgraded, and it makes a good “click” when you press it. The vibrations from the Tango are wonderfully strong, and even at the lowest setting they feel deep and rumbly. When you use the Tango inside another toy, such as a butt plug, it’s this power which really helps the vibrations to travel through the thick layers of material and still be able to be felt deep inside the body. It has to be the vibration patterns which are my favourite part though, as the rhythmic pulsing of the vibe inside a butt plug causes some great sensations internally, especially in the prostate. The vibe by itself is quite quiet, though I would say it’s a little louder than some other bullets I have, but still not enough to be heard through a closed door or a thin partition wall. When it’s inside another toy the sound gets muffled exceedingly well and is even less obvious. 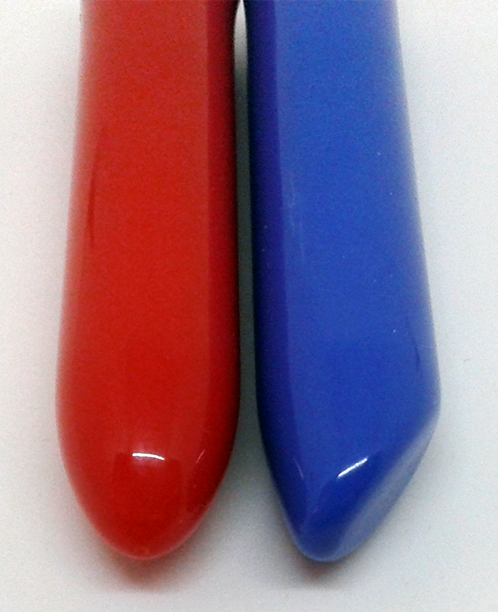 Aside from utilising the Tango inside bullet toys, the other way I can put it to use as a man is for penile stimulation, and this actually turned out to be one of my favourite things to do with the Salsa. Vibrations can feel incredibly stimulating on the penis if they’re used in the correct manner. Typically I don’t enjoy bullet vibes for this as they’re too buzzy, but the Tango is different. The Tango delivers strong vibrating sensations deep into the penis, which feel great when it’s applied to the head and around the frenulum. What’s fun about the Tango compared to the Salsa is that the angled tip gives you two different ways to use it. When you have the flat side applied to the penis you have a greater surface area of the bullet making contact with the skin, which increases sensation. Typically I find myself using the rounded side more, just as I would have used the Salsa, and perhaps out of habit, but it’s nice to have the option of both, and to be able to switch between them mid masturbation to add in a little variety. Despite the tip being slightly less pointed than on the salsa it’s still great for applying more precise and concentrated stimulation, and the difference isn’t discernible to me. The different vibration patterns also work well in this instance and can increase the level of pleasure, and hasten climax. It can be great to use just for teasing as part of foreplay, or in combination with a handjob to enhance the experience.

The Tango is a waterproof toy, which means it can be used in the bath or shower if you’re considering taking your play outside the bedroom. It also means that it’s very easy to clean, as you can splash as much water over it as you like. As a precaution you only want to wash it with hot water and anti-bacterial soap, or with your favourite toy cleaner / toy wipe. Plastic is a durable material, but it’s not advisable to go boiling electronic items. 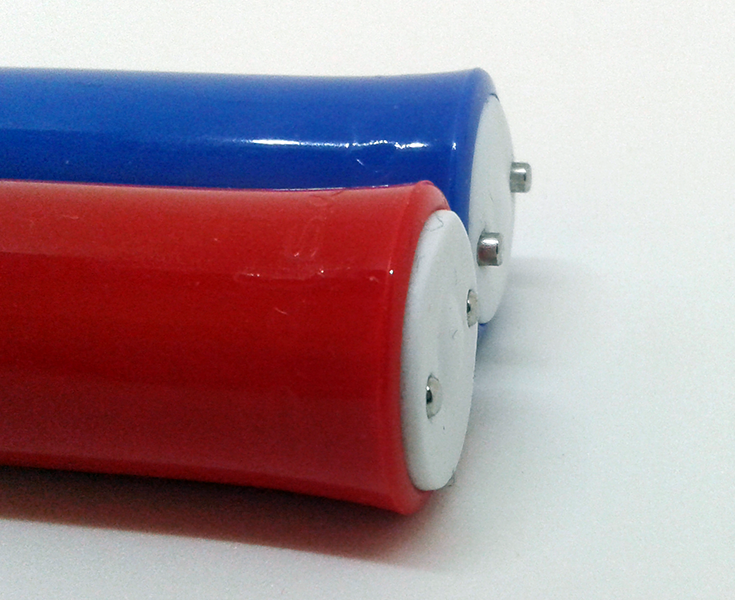 The Tango comes with a rather clever magnetic charging system that works through USB. It’s comprised of two basic parts, a white dock which connects to the Tango magnetically, and a separate cable which runs between the dock and a USB port on a computer. The advantage of the magnetic system is that it allows the Tango to be 100% waterproof. The way this is achieved is by having a solid silicone-rubber cap at the end of the Tango, which is where the control button is located. Either side of the button are two metal electrodes which protrude above the rubber seal, and these in turn connect to two shallow metal depressions on the underside of the plastic dock. When all the metal parts are touching the current flows and the Tango charges. The improvement here is that the electrodes on the Tango protrude significantly further than those on the Salsa, and thus always maintain contact for the duration of a full charge, unlike on my Salsa which would frequently break the connection and stop charging well before it was done. The only slight downside to the improved electrodes is that their protrusion can feel somewhat uncomfortable on the finger when you’re trying to press the button that sits between them, but I’m not going to complain as it’s preferable to the nightmare I had charging my Salsa. The dock itself has a little orange LED on it which illuminates whilst charging is taking place, and goes out to indicate that it’s complete. Once the is Tango is fully charged it has enough battery life to last for 2 hours, which is impressive for a toy of its size. Another new feature on the Tango is that an orange LED next to the power button will start flashing to indicate when the bullet is low on power, which is very handy so you know when to charge it up again, and avoid taking it out of your drawer next time only to discover it has only 60 seconds of life remaining.

One of the nice added features is that the Tango comes with its own white satin storage pouch. It’s a little oversized compared to the diminutive bullet, but it’s useful for putting the USB charging cable in too for when you’re travelling. 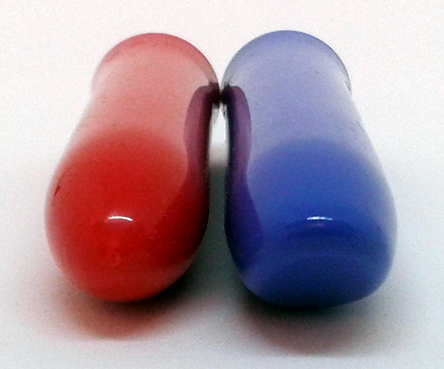 Overall I’m exceptionally pleased with the Tango; it’s powerful, versatile and a quality product. I’m very impressed that they’ve managed to iron out all the complaints I had about the Salsa, and as such I’d have to give it full marks. The difference in shape of the tip is something that I’m neither here nor there about; I do like the versatility of it, but I was also perfectly content with that of the Salsa, and could see myself being equally happy with either, so it’s not a game-changer for me. The USB charging, though, is a massive improvement as far as I’m concerned, and in fact the only thing I could honestly say that I miss about the Salsa was its scarlet colour, otherwise I’m a full Tango convert.