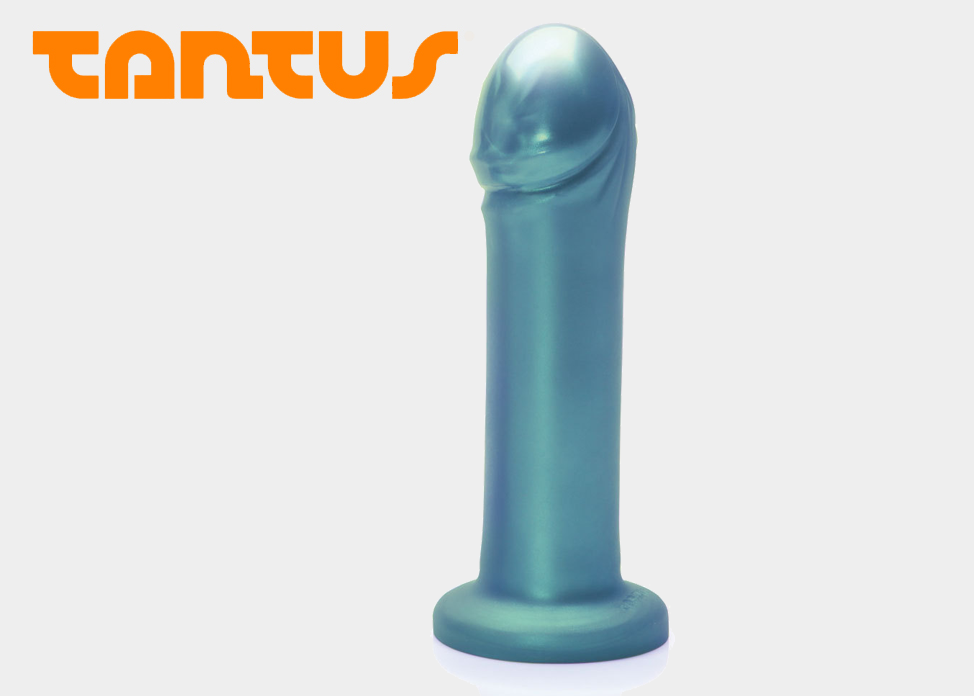 So, it’s finally time for my first review of 2014, albeit with a quarter of the year behind me already, but unfortunately sometimes blogging ends up taking a backseat when there’s a competition for one’s time. I’m making a start on my pile of Tantus Christmas goodies by taking a look at the gorgeous Duke, one of Tantus’s newest dildos.
You can get the lowdown after the jump!
For those of you who are well acquainted with Tantus products, you’ll probably spot that there’s something rather familar about the Duke, and that’s because the Duke is a reinvented version of one of my favourite Tantus dildos, the Raptor. If you were to take the Raptor and strip away the balls, make the shaft a little straighter, and tuck a bullet hole into the base, then the Duke is what you would be left with, and it’s quite a clever move on the part of Tantus because it takes one highly successful aspect – namely that bulbous head shape – and repackages it in a way so as to appeal to people who maybe weren’t so keen on the idea of the balls, or who would have liked the option to add in a little vibration to the mix.

Like with the Raptor, one of the first things which drew me to the Duke, aside from the design, was this stunning new colour that Tantus have introduced. They’re calling it “peacock” which sounds rather elegant, and almost regal when paired with the title Duke, and it’s this deep pearlescent teal that shimmers as it catches the light. It is also available in a more traditional purple tone if that’s more to your liking, but I’m predicting that few will eschew the unique peacock in favour of it.

The production quality of the Duke is impeccable; something which I’ve learnt to expect from Tantus. There are no mould lines anywhere, nor any defects in the surface, so I really couldn’t complain about a thing even on my most nitpicky day.

When it comes to using the Duke it’s one of those toys where you’ll probably need something to warm up with first, rather than diving right in, unless you’re feeling especially limber that day. The head is very large and rounded, with quite a rapid taper, so the best way to tackle it is to prepare yourself first with something more gradual. It is possible to to insert it without the aid of another toy if you’ve had prior experience with something of this size, but it’s going to be a slower process and require more patience, as trying to force it will only aggravate the sphincter. It probably goes without saying but the Duke isn’t a beginner’s toy and is best tackled by people who comfortably know their way around a dildo or two.

One thing I especially love about the Duke is how good it is for prostate stimulation. That big head is nothing short of incredible; the size, the shape, the firmness of it, somehow it all comes together so that with every thrust it rubs back and forth across the prostate to the maximum effect, delivering waves of pleasure. In this regard it completely matches the performance of the Raptor and doesn’t lose anything in the process of making slight design changes. All the features still complement each other and ensure that the Duke‘s performance remains exemplary in terms of prostate stimulation, even down to that “wow” I experience with the Raptor.
Like many Tantus toys the Duke does come with a vibrating bullet which can be inserted into a hole in the base. If you know me then you’ll be aware that I’m not especially crazy about this feature and tend to prefer to use a dildo just as a dildo, but it is quite nice to have the option there, and you can always use the bullet separately if you don’t want it inside the toy. The bullet itself is almost identical to the RO-80mm from Rocks Off, so that review is the best place to go to get a full idea about the intensity of it. It’s pretty simple to fit into the bullet hole in the Duke, and thanks to some internal ribbing within the hole which acts to prevent a vacuum from being formed, it’s also removed relatively easy. My general problem with toys with bullet holes is that the hole is in the base, and you want the vibrations down at the tip, but they simply don’t travel that well through inches of thick silicone, so I just don’t find it worthwhile, but that’s very much a personal thing.

The Duke is available directly from Tantus.