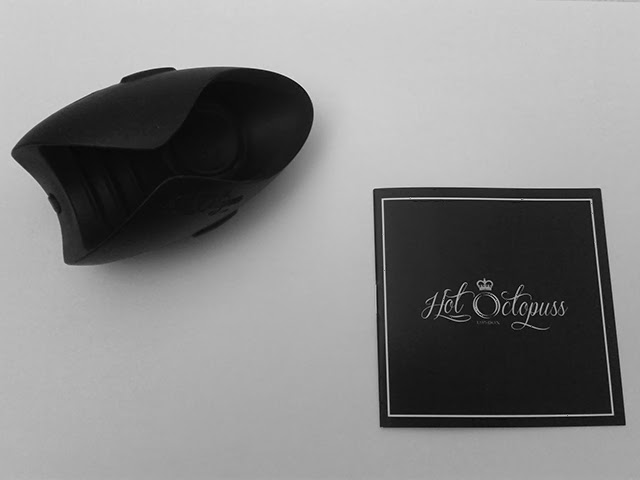 Note: this product has since been replaced by an updated version, the Pulse III Solo

The Pulse is the first product released by a new British sex toy design company called Hot Octopuss, and it’s a vibrator created especially for men, or a “guybrator” as some of their literature describes it. It’s primarily designed as a toy for solo use, but also with an application for couples if desired – albeit heterosexual couples so understandably I won’t be focussing on that aspect.
The design of the toy is an exceptionally stylish thing to behold, and it’s not easy to explain precisely what it looks like because the whole thing is pretty unique. I don’t think it would appear out of place masquerading as a piece of alien technology on the set of a science fiction film, but back down on Earth the closest thing I could compare it to is a conch. The big sweeping sides that curl upwards like part of a shell definitely give the appearance of something which may have washed up on the beach, while the ridges along the underside are reminiscent of the fossilised remains of something prehistoric. The bottom half of the toy is made from a shiny black plastic, and this is where all the mechanics of the Pulse are housed, while the top half is made from a flexible matte silicone and forms a semi-enclosed channel into which the penis is inserted. The channel itself is about 4″ in length, and 1 1/2″ wide in its resting position, though the flexible silicone “wings” which enclose it can be easily bent to accommodate more width and create a snug fit. Towards the far end of the channel is a raised “button” which is the Pulse Plate – the source of the vibrations. This is positioned so that during use it will sit just below the glans and up against the frenulum – the most sensitive part of the penis. The whole unit is reasonably compact  and its ergonomic shape fits very comfortably into the hand. On either side of the body is a button, a + for more power and a – for less, and these are easily accessible when holding the unit.
The build quality of the Pulse is of a very high standard and it looks particularly well made, and not at all cheap. It also feels quite robust so I would expect it to be quite durable down the line.

Using the Pulse is quite a straightforward matter; to start with you simply spread the “wings” of the device and insert your penis so that it aligns properly with the pulse plate. The “wings” are flexible enough to spread by a large amount and accept a broad range of penis sizes, as I discovered by inserting various anatomically-correct dildos into the toy. One thing I did notice though is that the “wings” are flexible mainly at the top half, and not towards the bottom, so while the top section can become almost infinitely wider the bottom of the channel always retains the same semi-circular shape. Where this could cause an issue is that most penises don’t have a completely circular cross-section and are wider from left to right than from top to bottom, so depending on the size and shape of the penis you may find that once inserted to the fullest extent the shaft may hover above the Pulse Plate without actually making direct contact. This probably won’t be an issue for most people, but if your penis is very wide in one direction, and not so much in the other, then it’s worth bearing in mind. Because of the way in which you insert yourself you don’t actually need to use lube with the Pulse which is an added convenience. You can of course still do so if it’s your preference, but I didn’t find it necessary.
To turn the Pulse on you start by simply pressing the + button once and it begins on the lowest setting. Boy are you in for a surprise. When I talk about strong, powerful, deep rumbly vibrations, this is precisely what I’m thinking about. For a non-mains-powered unit the strength and quality of the vibrations is truly spectacular; it’s almost like holding a Magic Wand vibrator to the head of your penis and it blows the Fun Factory Cobra Libre out of the water by a mile. Bear in mind this is only the first setting and it keeps on getting stronger each time you press the + button, so this astonishing level of power only continues to grow. There are times with other vibrators where they feel pretty strong, and good, but I just can’t get over that plateau and climax, so I return to traditional masturbation to get there. That’s never going to be the case with the Pulse, because if you’ve tried vibrators before with little luck, and are convinced that your penis is stubborn to their effects, then I’m certain that the Pulse would soon change that. Even on the lowest setting I feel as though I could reach orgasm in only a matter of seconds because of how intense and wonderful the feeling is. On the flipside the fact that the lowest setting is so strong means that it’s not so easy to tease yourself with the toy. When you’re starting at orgasm strength you can’t really get a steady build up, and if things are suddenly too much and you want to prolong it more then the only place to go is off. It really is testament to how strong the toy is that I’m saying this, because normally I ignore the lower levels and go straight to maximum. To give another perspective, the intended way of using the toy is with the foreskin retracted and the Pulse Plate directly touching the sensitive inner tissues of the penis, but I tried it with the foreskin left covering the head and the vibrations were still strong enough to work their way through and make it very pleasurable, which is good news for any guys out there with foreskin troubles who would still like to try a sex toy.
The Pulse has only a constant vibration setting rather than also including patterns, such as with the Cobra Libre, and what you make of this is going to be down to preference. Personally I’m fine with it and find that constant vibration works best for me on the penis, and I don’t need a load of patterns on top of that to confuse matters, but others may prefer something rhythmic to imitate the ebb and flow of thrusting, and this happens to be absent. When you’re cycling through the vibration strengths with the + and – buttons, holding the – down for a second or two will quickly power off the whole unit, just in case you need to do it in a dash, which is always useful. 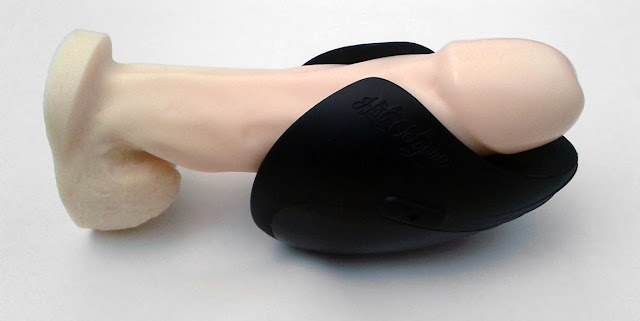 The idea behind the Pulse is that, much like the Cobra Libre, it’s a toy where you insert yourself and allow it to do its work, rather than it being a thrusting toy, and in fact it’s suggested that it can be used entirely hands-free. I found that the hand-free approach didn’t work so well for me and I got the best effect from it when I held it in the palm of one hand and used my thumb to apply pressure to the top of the shaft and push my penis into the Pulse Plate so that it made full contact. By themselves the silicone “wings” aren’t quite enough to grip it so sufficiently as to achieve this effect without some outside force. For solo use I wouldn’t really consider this as a criticism, but for couples use you may want to have both hands available to do other things with.
The only point about the Pulse which I’d list as a proper negative is the noise, because it is louder than other vibrators I have. It’s up there in electric shaver / electric toothbrush territory. It’s not crazy or ridiculous, it’s still within the bounds of acceptability, but it’s louder than I’d like. If you’re someone who’s in a living situation where you’re concerned about other people hearing your sex toys, then I might be concerned about this one. It’s a case where you’d want to drown it out with the TV to be safe.
The Pulse is a fully rechargeable toy and it comes with a USB cable which plugs into a port in the rear. The port is sealed by a little silicone stopper which easily comes out, though which can be reluctant to stay in place when you try to put it back in again. Unfortunately because of the charging system the Pulse isn’t waterproof, in fact it isn’t even advertised as being slashproof, and they recommend that at the most you wipe it over with a damp cloth. This is a little bit of an inconvenience, but at the same time the design of the toy means that you probably won’t be getting bodily fluids all over it anyway.
Overall I’d have to say that I really would recommend the Pulse, and considering that it’s the first effort from a new company I think they have done spectacularly. It’s not perfect, but Hot Octopuss are off to a flying start and I can only expect great things from them in the future. The Pulse is a really well made toy, it uses quality materials, it’s insanely powerful, it’s easy to use, and it’s practically guaranteed to be able to give you a great orgasm. The only downsides are the noise, the fact that it’s not waterproof, and that it might not quite suit all penis size/shape combinations, but in the big picture I think that these can be overlooked because of how it really excels on its strengths. Compared to the current market-leading male vibrator, the Cobra Libre, it’s the Pulse that I would be inclined to recommend.
Tweet
Pin