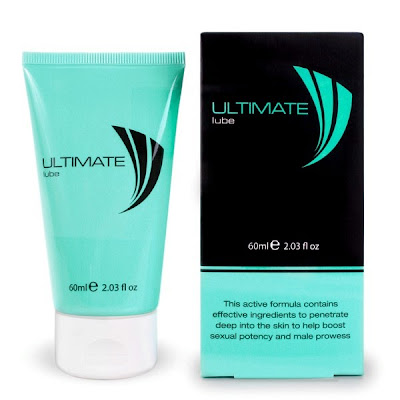 Recently the folks at Planet Earth Wholesale asked if I’d be interested in reviewing some sexual enhancements products from the “Ultimate” range, including this stimulating lubricant. Normally I’m not a huge fan of reviewing lubes because there’s only so many different ways to describe how slippery something is before it all starts sounding the same, but these products seemed interesting enough for me to make an exception.
The Ultimate Lube is a condom-safe water-based lubricant, described on the packaging as a product designed to “boost sexual potency and male prowess” which is certainly quite a lofty claim to be made for a lube, and not one which I’m sure can be definitively put to the test, but it certainly should be fun investigating.
The lube is quite a thick, clear, gel with a strong aroma of menthol, very reminiscent of Wrigley’s Airwaves chewing gum. When you couple this scent with the blue packaging it immediately gives the impression that it’s going to be a cooling lubricant, the idea of which rather appeals to me. I’ve never actually tried a cooling lubricant before, but ever since one day in childhood when I spent an awful lot of time in the shower thoroughly washing myself with Lynx Glacier Water & Deep Sea Enriched Mint shower gel, I’ve been a fan of a refreshingly chill sensation around the genitalia.
The directions for use suggest applying a “small amount” of the lubricant and massaging it into the “desired area”, namely the penis, and so I duly did as such. Shortly after application you begin to experience a cool tingly sensation in the mucus membranes with make up the head of the penis and inner lining of the foreskin, and this is actually quite pleasant, and indeed refreshing. At this point the natural inclination is to begin masturbating, and the combination of the physical stimulation with the cool sensations of the lube produce a very pleasing result. Unfortunately as time progresses the pleasant feeling begins to wane, instead being replaced by one of discomfort as the sensation from the lube continues to intensify, moving from a cooling sensation to more of a burning one, and eventually in my experience something quite unpleasant. I left the lube on for as long as I could stand, hoping it might eventually die down, but in the end I was forced to wash it off, which thankfully eliminated the discomfort entirely and left no after-effects. I spoke to someone from the company about my experience, and apparently the lube is intended to have an effect which causes blood to be drawn to the surface of the penis, in order to increase arousal and improve erection quality. I can’t say that I noticed that particular result amidst my discomfort, but perhaps my experience was typical, and I was merely extra sensitive to the effects. I can only speak to my own experience, and it seems perfectly feasible that others may react less strongly to it than I.
Setting aside the physical sensations of the product for a moment, there’s also the question of how it performs as a lube. It’s quite thick so it does adhere nicely to the skin, or indeed any toys which you may wish to use with it, and it starts off feeling quite slippery. My primary complaint about how it performs as a lube is that it doesn’t last long at all. Even when using quantities far more liberal than those suggested by the packaging, after a short while the lube becomes gummy and tacky, causing skin to stick to skin, and increasing friction, rather than giving a smooth gliding action. Were I a fan of how it worked in other regards, then I’d probably apply only a small amount of this first, then couple it with one of my favourite lubes, rather than using it by itself.
Normally I would include a section on how it performs with insertable toys, but you’ll forgive me if I decline to put into my rectum something which caused irritation to my penis, as the former is far less easy to rinse than the latter, and the outcome seems almost predictable anyway.
In summation I’d have to say that it’s not a lube that I’d give my recommendation to. While not everyone will experience the same bad reaction as I did, the fact is that it’s just not really a great lube to begin with. Were it a fantastically slippery product which lasted for ages then maybe I’d suggest taking a chance and trying it, but right now essentially what you’re looking at is a lube which is tacky, which won’t last long, which needs to be mixed with something else in order to make it usable, and which has as least some chance of causing you discomfort / irritation.
If anyone else has tried this then I’d love to hear your experiences in the comments below, whether they be similar or completely different.
Tweet
Pin