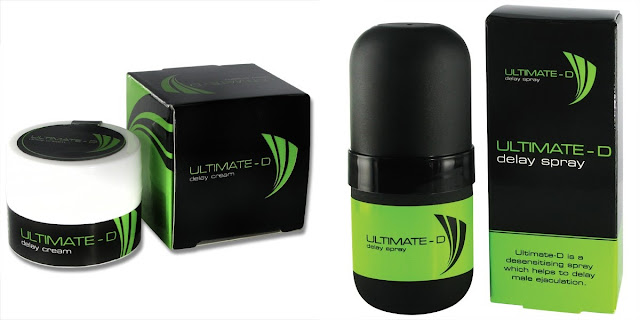 It’s my second review of the “Ultimate” products, and this time I’ll going to be looking at Ultimate-D, two products designed to desensitise the penis and prolong sex, for those looking to really extend the throes of passion with their lover.
The Ultimate-D comes in two different varieties depending on your preferences: there’s a cream and a spray, and we’ll look at each in turn. Surprisingly the products are quite different, especially when it comes down to the ingredients, rather than just being essentially the same thing but with different modes of delivery.
Cream:
The cream comes in two different sizes; there’s a 15ml pot and a 6ml pot, both of which are quite tiny so you’ll want to use it sparingly. The cream itself is a thick white substance with a greasy feel to it, and it spreads quite well so you really don’t need a lot. The only ingredient listed on the packaging is Lidocaine, which is a local anaesthetic, so you’d expect it to be quite good at doing its job.
To use the cream you simply apply a small amount to the most sensitive parts of the penis, namely the glans and the frenulum, and massage it in until it disappears, which luckily doesn’t take long as it’s readily absorbed. The packaging recommends not having sex for 10 minutes after application, but that the cream should start to take effect after 3-5 minutes. 10 minutes does sound a little long, especially if you’re in the middle of spontaneous sex and have to stop and wait, so you’d better have figured out something else to do with your partner during that time, lest the mood be killed.
After waiting 5 minutes I did notice a mild reduction in sensitivity when I touched my penis, but it was barely perceptible for the most part. During subsequent masturbation the effects of the cream didn’t appear to cause any reduction in the feelings of sexual pleasure coming directly from the surface of the penis, which I took to be a good sign, but in a way it also did seem to feel slightly less sensitive, though a part of me wondered if I may have been imagining it. Even though sexual acts felt no less pleasurable I did have some inkling that I may be able to last for a slightly extended period, though by no means anything dramatic, so it did appear to work to some minor extent.
Spray:
The spray comes in a 25ml bottle so you get a much larger quantity than with the cream. It has a rather fresh smell about it, like a citrusy household cleaner. It doesn’t appear to have any local anaesthetic in it like the cream does, and relies much more on natural ingredients such as peppermint and menthol.
To use the spray you simply point it at the head of the penis, squirt enough to get good coverage, then wait for it to evaporate and you’re ready to go. Like the cream the spray does have a slightly greasy feel to it, so if you accidentally spray too much it can help to rub it in. Once the spray makes contact with the penis I found that it felt a little warm, though only briefly and not uncomfortably so. The only slight discomfort I had was around the opening to the urethra which exhibited a brief sting, so I’d advise making sure that you don’t get any of the spray in there.
In my experience the spray performed better than the cream and reduced the feeling of sensation by a greater degree, though I wouldn’t really describe it as being significant enough to have had a partially numbing effect. Like with the cream it didn’t seem to lessen the sensation of sexual pleasure which was good, though there was a greater awareness of the surface of the penis being less responsive to touch, and I felt more confident on this occasion that the product would allow the user to prolong their sex sessions.
I can’t speak to how well either would perform for sufferers of premature ejaculation, but in terms of extending the duration of sex under regular circumstances the spray would definitely get my vote. It’s quicker to apply, requires less waiting time before engaging in sexual activity, and it’s more cost effective in terms of the quantity you get for what you pay.
Tweet
Pin