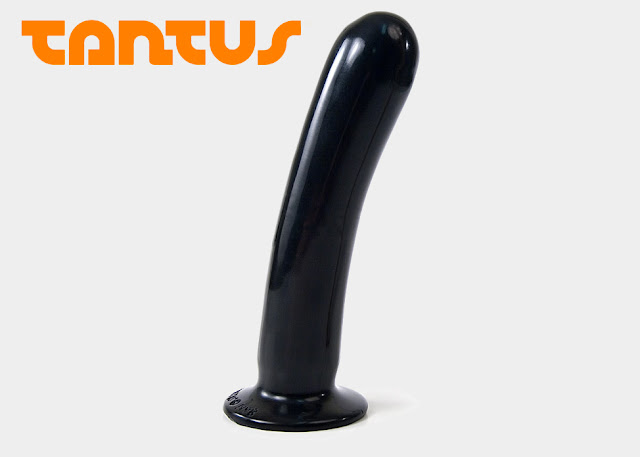 The design of the Silk is actually fairly simplistic, especially when compared to some of the other designs which Tantus is known for. It has a long straight shaft with a rounded tip, and it leans over very slightly to one side. In black it rather reminds me of an old-fashioned policeman’s truncheon, though at the same time some aspect of the shape has me picturing Pinocchio’s nose, in the way that it does vaguely resemble a generic wooden peg. At the bottom of the shaft the Silk has a nice 2 3/4″ wide base, and this provides the dildo with plenty of stability when standing it upright somewhere. The base is deep enough to prevent it from being flimsy, so this allows it to be used in a standard O-ring harness if this is desired. In the same vein, because the shaft isn’t overly thick it should be able to comfortably accommodate the placement of a vibrating cock ring over it, affording you another way to enhance your experience.

The Silk comes in Tantus‘s usual simplistic and tasteful packaging. It’s quite a plain plastic box which allows you to see the item inside, but which doesn’t cloak it from prying eyes. The box isn’t too large so it could conceivably be used for long term storage, but it’s also suitable for recycling if you want to be environmentally conscious.

You can buy the Tantus Silk from Lovehoney UK, Lovehoney U.S, and SheVibe
Tweet
Pin