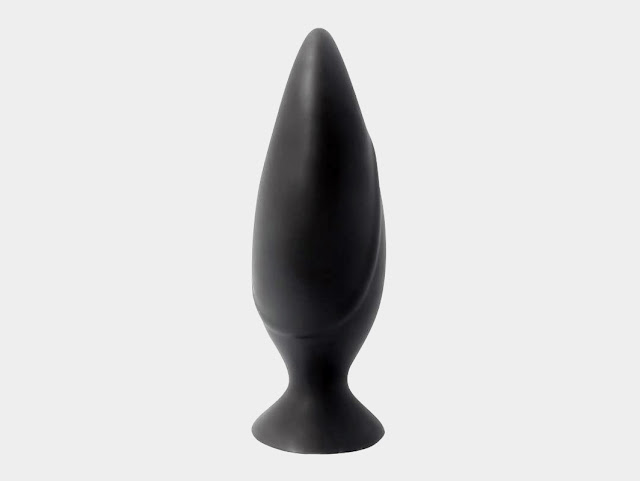 Last month when Sam from Simply Pleasure sent me the Jimmyjane Hello Touch to review she was kind enough to throw in a couple of samples from the Mojo range of toys. I must confess that Mojo isn’t a brand that I’ve heard of before – nor do I know from where it originates, though its products bear a “Made in China” mark on the packaging – but as always I’m keen to try out something new.
The two items which I received were the Ion Strength Cock Ring – which I may review at a later date – along with one of the Spades butt plugs. The plugs come in two sizes, a Large and a Small, and I happened to get the Small. You can check out the review below.
The Mojo Spades Small is indeed a rather diminutive butt plug, with its shape reminding me somewhat of a pinecone in its early stages of life. It measures in at just 4″ long, with 3 1/2″ insertable, and around the widest point the circumference measures 4 1/4″ (around about 1 1/4″ diameter).
The plug is manufactured out of silicone and is entirely odourless, tasteless, and completely body-safe. It’s a reasonably firm silicone with a slightly matte finish, but the size of the plug means that it’s easy to compress and bend about. The quality of construction seems good on the whole; there is a mould line running along the length but it’s very subtle and can hardly be felt. Other than that there are no visible defects or flaws to mention. One thing which is slightly strange about the build of the plug is that it doesn’t feel completely solid. When you attempt to bend it or squeeze it it just doesn’t behave quite right, almost as though the centre is hollow and encloses a void of trapped air. This theory gains a little more credence from the fact that the plug does seem a little lightweight for its size. I was going to say that unfortunately there’s really no way to tell without cutting it in half, but then whilst roughly playing around with it I discovered a less destructive way to confirm my suspicions. If you push firmly enough on the base then the neck-like section can be forced up and into the bulb of the plug, something which physically could not happen if the plug was solid all the way through, so it definitely is hollow, and not a feature that I’ve never encountered in a toy before. Despite being hollow the walls of the plug seem thick enough to make it quite a sturdy piece, so there’s no immediate cause for concern.

The shape of the Spades plug is pretty much your standard sort of conical butt plug design. It has quite a pointed tip and the whole plug is rather elongated, giving a gentle taper all the way down to the widest point. Beyond the thickest section the plug begins to narrow again and has a nicely-rounded underside which meets with the base of the plug. There is almost a neck between the bulb and the base, but it seems slightly foolish to refer to it as such as at best it’s no more than 1/4″ long. Unusually for a butt plug the base is designed as a suction cup and is very thin and floppy, additionally it’s barely wider than the rest of the plug at only 1 3/8″ in diameter. I have to say right now that it’s not the most reassuring design in the world, and I’ll go over some of the safety concerns in a little bit. The only other thing to mention about the design of the plug is a slight piece of detail on the bulb, which appears in the form of a raised ring which wraps around it at an angle. It’s hard to describe so it’s better to look at the picture to get an idea, but suffice it to say that this detail doesn’t have a great impact.

The plug is nice and easy to insert, and you wouldn’t really expect otherwise given the size and shape of it. The tapered tip glides easily through the sphincter, and shouldn’t pose much of a challenge to even the tightest of beginners. Once you get past the widest point the Spades does that classic butt plug thing of being sucked in the rest of the way, and here’s where we start to have a problem. Because there’s really no neck on the plug the sphincter doesn’t have an adequate place to come to rest once it’s inserted; you need at least an inch of neck for this to work properly, not 1/4″, so instead the muscle rests half on the underside of the bulb and half along the base. With the muscle right up against the base like that you’ll find the base being really drawn up into the body, and the surface of it sits completely flush with the surrounding skin. The real issue here is that frankly the base isn’t fit for purpose; it’s so thin, so floppy, and so narrow, that one small amount of pressure on it and it’s just going to fold up and be sucked into the body entirely. Simply put it’s not even remotely anal-safe, and potentially even dangerous. If you’re a beginner then possibly the stiffness of the muscle will work in your favour, but heaven forbid you’re feeling relaxed back there, because at times I could sense that I was mere moments away from losing it for good.

I’m sure that somebody reading this is thinking “It has a suction cup, doesn’t it? Surely if you stick it to something then that’ll stop you from losing it?” Well that is a good point, but it’s also flawed. Firstly we need to come back to the design of the plug. We’ve established that the plug has no neck, and that the base sits flush with the anus, so we have to think about what happens when you sit down. When you’re seated your anus typically doesn’t touch the surface that you’re sitting on, because the muscle and bone of the buttocks protrudes and gets in the way. If you have the plug stuck to a surface then you’re never going to be able to get close enough to the surface to have the plug fully inserted, so it doesn’t really work. The other issue of course is what you’d even do in that situation were it possible. Most people like to wear a plug during sex or whilst walking about, and not just sat down somewhere where a plug happens to be stuck for a little bit. On the subject of the suction cup, it does do an adequate job of affixing itself to most surfaces and holding firmly in place, so I can’t fault it in this regard.

Putting aside the problems with the base momentarily, the plug does feel comfortable when worn, though obviously it’s not especially filling. You can walk around with it in and it feels fine, and that base isn’t detectable under clothing, nor does it dig in or irritate the flesh. The plug doesn’t feel overly secure for the most part, just down to the lack of neck, as it means the sphincter never closes completely and the underside of the bulb is only ever a short way from starting to make its way back out. You’re caught between trying to clench the sphincter sufficiently so as as to hold the plug in place, but not so much as to accidentally pull the plug too far into the body.

On the whole I’m just not impressed and I’d probably suggest that people avoid this plug. It’s made from a good material, and it is inexpensive, but that doesn’t make up for the dangerous base, the pointless nature of the suction cup, and the fact that it’s hollow in the centre. It’s a good size for beginners, but if I were a beginner and I had an accident with this plug then it would have sent me into a real panic, so it’s not worth the risk. There are plenty of good, small, silicone plugs out there if that’s what you’re looking for – ones which are safe. Safety always needs to be paramount with anal play, so bear that in mind and put your money towards something you can have confidence in.