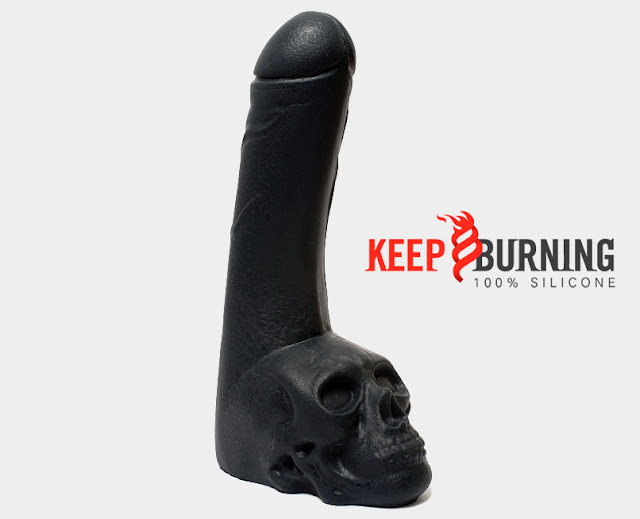 A couple of days ago I was browsing social media, as I often do when trying to keep up to date with the latest comings and goings in the sex toy industry, when I happened to spot a Tweet featuring a product which really drew my attention – the Cock Skull dildo. As you’ll probably know I love unique and unusual products, so suddenly I had to know everything about this, including who made it and what it was made from, so off I went to do some investigation work. I soon discovered that the Cock Skull dildo is made by a little company based in Luxembourg called Keep Burning, and it’s not the only interesting design they have available either. What really stood out for me though is that all their products are handmade in Belgium from 100% silicone, and they even have a page dedicated to explaining why they do this, so instantly I knew that this was a company I was going to like.
Armed with this new knowledge my immediate urge was to share this discovery with everyone, so naturally I sent out a Tweet about this amazing-looking dildo, and it just happened that someone from Keep Burning saw my Tweet and messaged me with an offer of a product to review. I have to say that I was thrilled to be able to get my hands on one in such a short space of time after initially discovering it, and now you can read my review below!
The Cock Skull is really like no other dildo I’ve encountered before, and features a fascinating and intricate design which captures so much detail. It’s gothic, it’s macabre, and in a way it’s also beautiful if you happen to share an appreciation for that sense of aesthetic. It has a thick towering shaft which stands tall at an imposing 11″, and which measures 7 1/4″ around the middle, broadening to 8 1/4″ at the widest point. Of that 7 1/4″ are insertable, and at the base, instead of a pair of balls, sits a perfectly sculpted skull, looking like it was plucked straight out of an ancient catacomb. It is a slightly strange sight to behold, an oversized penis sprouting out of the top of a skull, and in a way it reminds me of an image from a fantasy novel, of a stout church candle placed atop a skull and allowed to fuse in place as the wax melts below the flame. It could just as easily be an idol or fetish, found lurking beneath a pyramid hidden deep in the jungles of South America. There are no shortage of comparisons that could be made with it, such is the nature of the piece, in fact my first urge when I unwrapped it was to hold it aloft in my hand and profess “Alas, poor Yorick! I knew him, Horatio” like Hamlet did with the remains of the court jester in Shakespeare’s play of the same name. While I’m sure it won’t be making its stage debut any time soon, however you choose to look at it it is undeniably unique, and that only adds to its appeal.
The Cock Skull is made from 100% platinum silicone, like all products from Keep Burning, and it’s one of my favourite materials. It’s completely odourless, non-porous, and bodysafe – all the things you want to have in a high quality toy. The dildo comes in just one colour, black, and has a matte surface with a leather-effect finish. Again it’s quite unusual to have a dildo with a leather texture, it’s certainly not something that I’ve encountered previously, but it does give a nice appearance, and a rather realistic one at that. It does look like it could actually be upholstered from leather, or how I imagine that one of those Victorian umbrella stands made from the foot of an elephant might appear. Funnily enough, while I may never have seen a leather-effect dildo before, I have seen penises in real life which I would describe as having had a leathery-looking head, but that’s perhaps a story for another time. The silicone itself is a little on the firm side but there’s still a reasonable amount of give in the surface when you squeeze it, and you can gently bend the shaft back and forth a little way without too much effort considering its size.

The construction quality of the dildo is honestly impeccable and there isn’t a single mould line in sight, nor flaw. The level of detail around the skull is quite extraordinary, the way it captures the bone plates, the eye sockets, ridges over the brow, the bridge of the nose, and even every grinning tooth is picked out. It’s really worth taking the time to look at it because you can tell that someone’s consulted an anatomy book during the design process, and not merely constructed it from imagination. It’s a piece of sculpture of artistic calibre. In contrast to the skull the penis section is much more simplistic; it begins with a nice rounded head which is relatively short and streamlined with the shaft, rather than flaring out with a pronounced corona. Apart from the leather-effect texture the only real detail on the head is a long urethral groove which extends down it and meets with the frenulum. Directly below the glans is a subtle indicator of a retracted foreskin which further helps to streamline the head, and this blends in seamlessly with the rest of the shaft. The shaft itself is decorated with a couple of long veins running vertically, and which branch out laterally in several places. The veins are fairly pronounced, but the surface of them is smooth and rounded, so far less extreme than the texture of the Super 7″. Beneath the dildo is a broad flat base which measures 6″ x 3″, and at one end is a hole intended to be used in conjunction with a bright yellow suction cup that’s sold separately, so that’s always a handy option to have. Keep Burning were kind enough to throw in a suction cup with my parcel so I’ll talk a little more about it later. 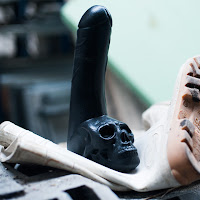 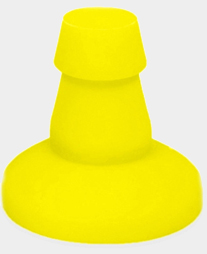 The packaging for both the dildo and the suction cup is quite simplistic; they come vacuum packed and heat sealed inside shrink wrap which bears the Keep Burning branding and a notice which states “warranty void if packaging has been opened.” It also has a small hologram stuck to the base which bears a CE mark and the words “Council of European Adult Products Manufacturers.” This isn’t an organisation that I’ve heard of before, but all the same it does seem reassuring. I quite like the packaging because it’s everything that you need really; the plastic keeps it away from dust and acts as a hygiene seal, it’s minimal so you don’t have a huge box to throw away, and it allows you to see and judge the size of the product without opening it, so provided you heed the words on the plastic you can return it if you accidentally went too large.

Overall I have to say that I do adore the Cock Skull  and it’s easily one of my favourite pieces now. I really can’t get over how fantastic the design is; it’s so unique and it just looks amazing. It really is a big toy only for people who can handle it, but it’s made from high quality materials, to an exceptional standard, and it feels great too. I really would recommend this toy, and indeed this whole brand, to people. I’m always excited to find a new company that’s doing great things, and Keep Burning definitely fits that bill. Many thanks to them for sending me one of their wonderful toys.
You can buy the Cock Skull dildo from my friends at MEO who ship worldwide.